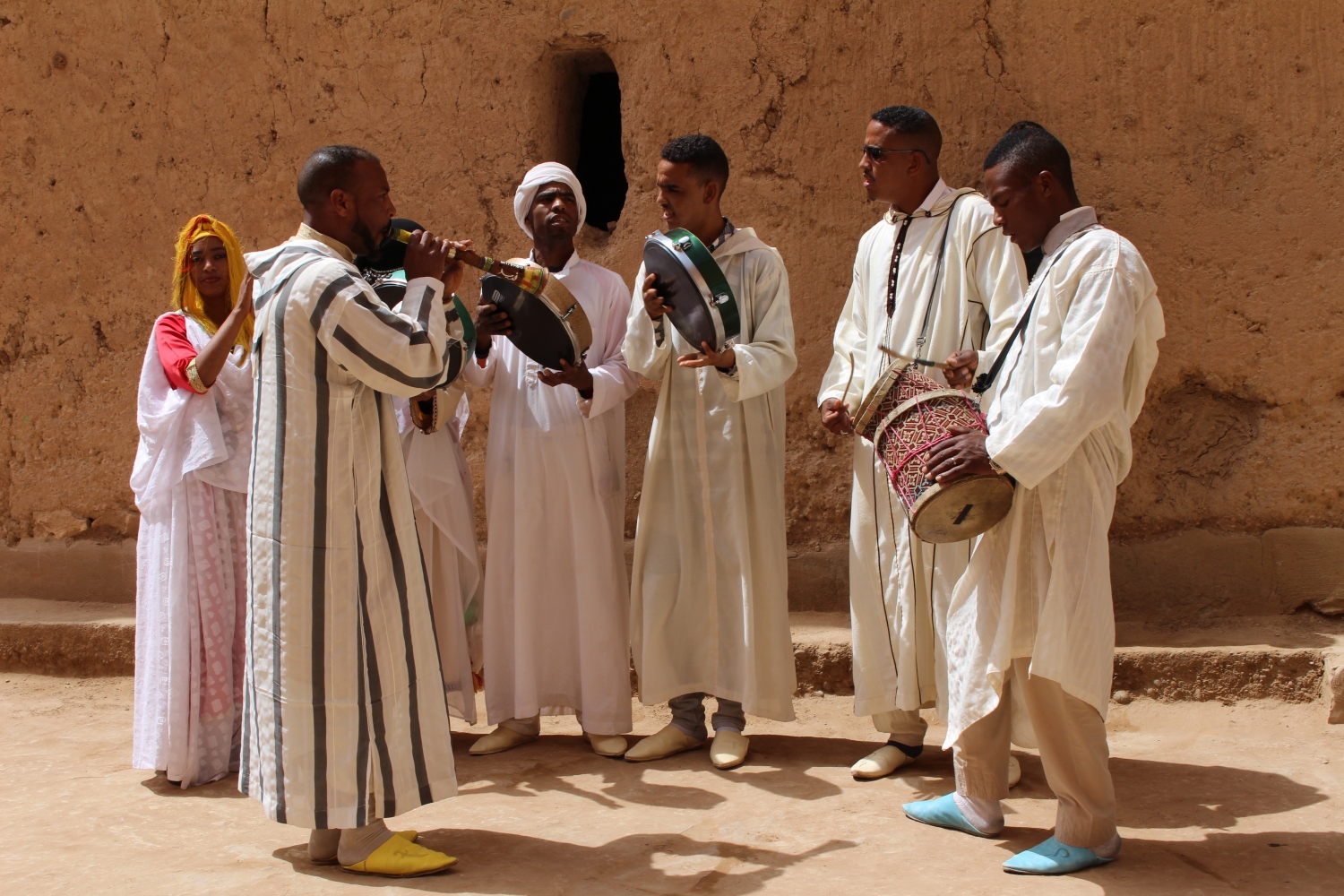 At breakfast this morning in Merzouga, Father Anthony asked about my background, and I summed it up for him.  For some reason, he said I was a “battler.”

We left our hotel at 8:15. As we drove, we were surrounded by reg, or hard-packed desert, with sagebrush and small brown mountains in the distance.  Plastic bags and refuse were scattered all along the roadside.  We had to brake quickly for a pack of dogs.

We stopped for gas in Mecissi at the 212 Petrol Station.  We drove on a dirt road through the small town that seemed under an invasive kind of construction.  Pink and coral buildings sported green metal doors.  Rubble was everywhere.  A donkey plodded along carrying a man and a huge load of greens.

Aziz sang in the front of the van “Ayawow!” and we tried to sing along with him. Black-robed women walked among date palms.  Vegetable markets and an Alimentation General offered food for sale, while the Pharmacie offered drugs.  The local mosque was pink with green doors. We went over a very bumpy road, so dusty that even the date palms had turned brown.  Mudbrick walls deteriorated all around us. The farms were small family-run plots of onion fields.

Hundreds of small hills popped up all around us. These bumps were apparently an underground irrigation system – wells 25-30 meters deep, connected to each other all the way to the oasis. They weren’t being used currently because of a drought. It took several months for each village to dig its own well.  As electric lines appeared, Aziz told us the water table was deeper here.

We could see the Anti-Atlas Mountains, which are full of silver and copper mines. We passed a Trilobite Museum, featuring extinct marine arthropod fossils.  Houses were in various states of completion, roofless, with large reddish-brown bricks. Villas expanded in size.  Again, more black-robed women and pink villas.  One mosque was terra-cotta colored with a gold-edged minaret. The spreads of date palm plantations reminded me of Oman.

We stopped at Cafe Touroug for coffee.  Bougainvillea cascaded down the front of an open air cafe with colorful plastic chairs under a thatched roof. 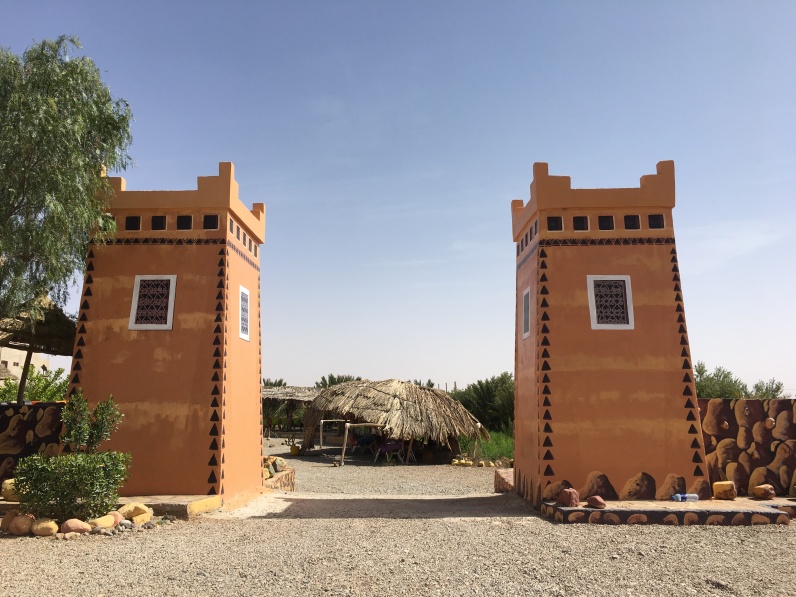 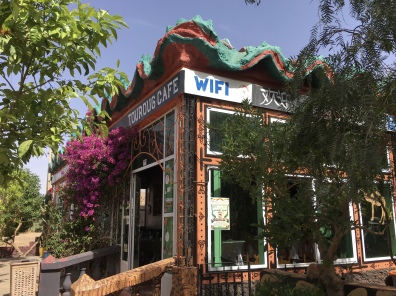 We passed the famous goats in the trees.  Mario and I had seen a lot of those in Oman, but here, according to Aziz, people forced them into the trees so tourists would stop to take pictures (for a price).  They were too far from the road to get a decent photo.

We stopped in El Khorbat, where we listened to Berber music and I bought a turquoise Berber scarf.  It was a festive time. 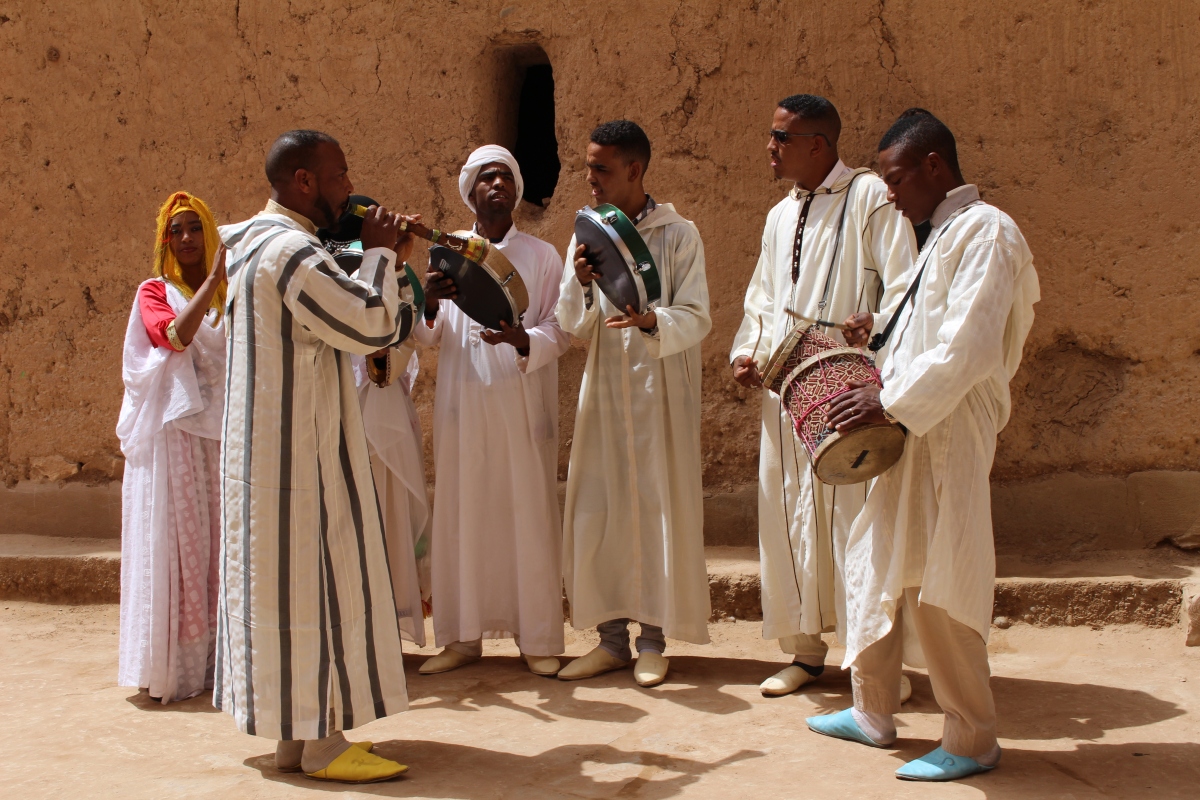 our lunch restaurant in El Khorbat 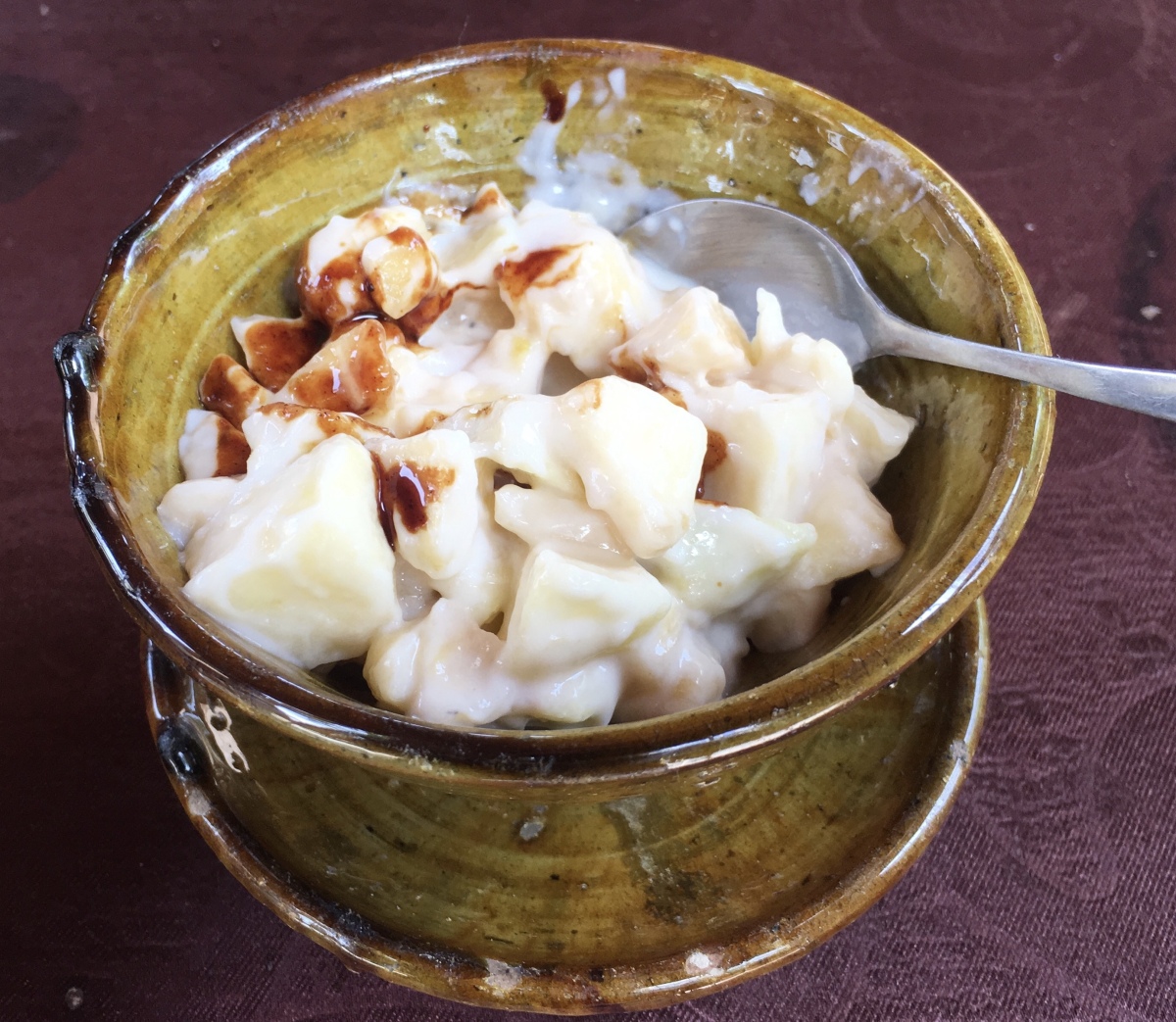 apples and bananas with yogurt and fig sauce 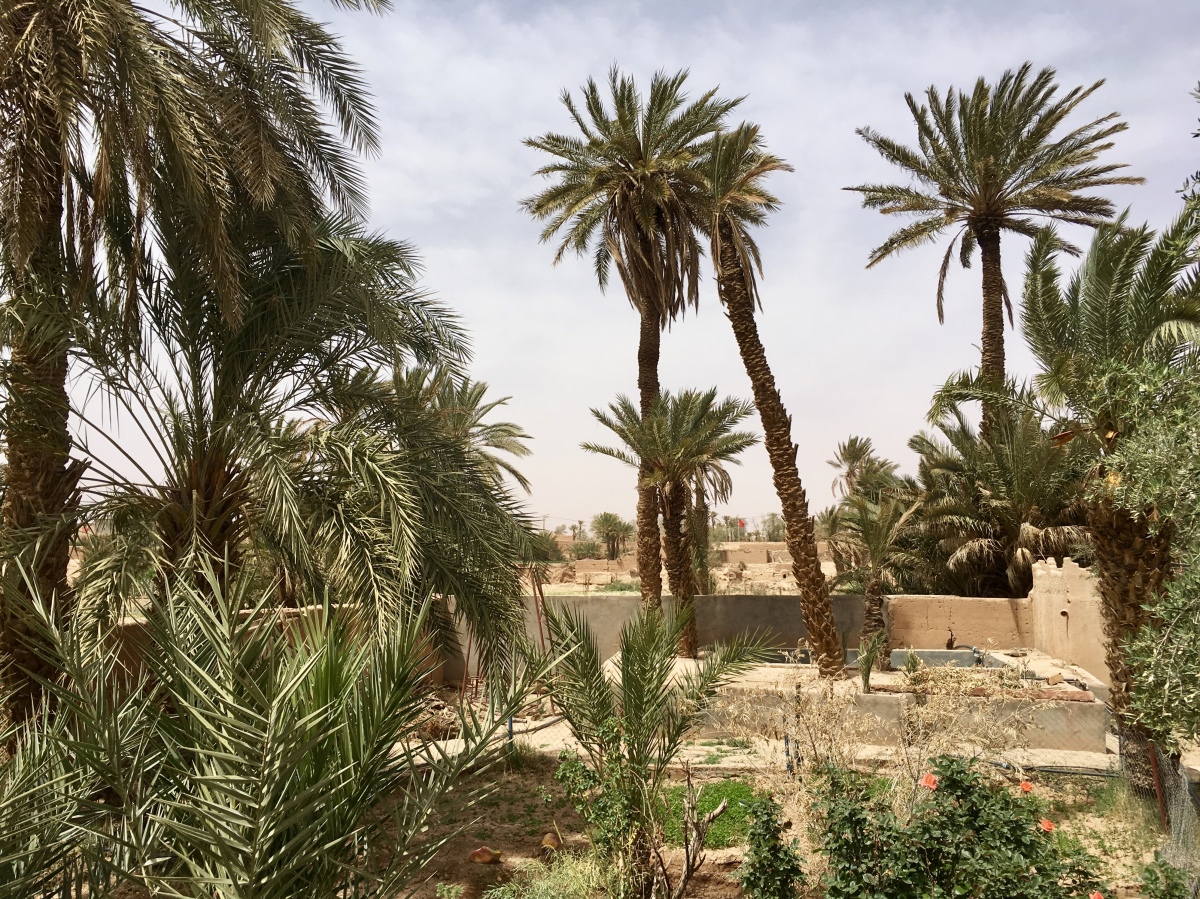 view from the restaurant

garden at the restaurant 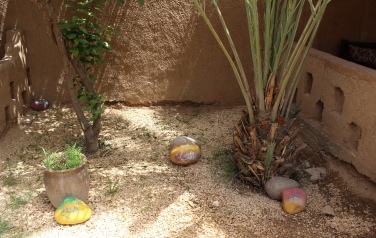 painted rocks at the restaurant

We then visited the Musee des Oasis that taught us a few things about Berber history.

In the Berber oasis, handicrafts were undertaken to fill local needs.  Ironwork was a labor undertaken specifically by black people.  The silversmith’s work was a specialty of Jewish people.  Carpentry and saddle making were both done exclusively by men.  Women wove carpets and blankets and embroidered shawls, as complementary activities to their housework. 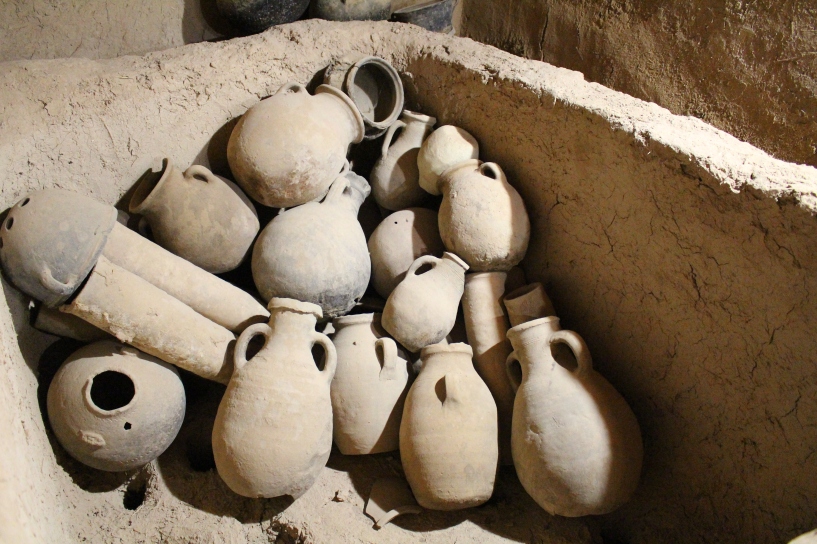 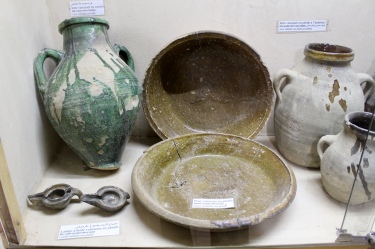 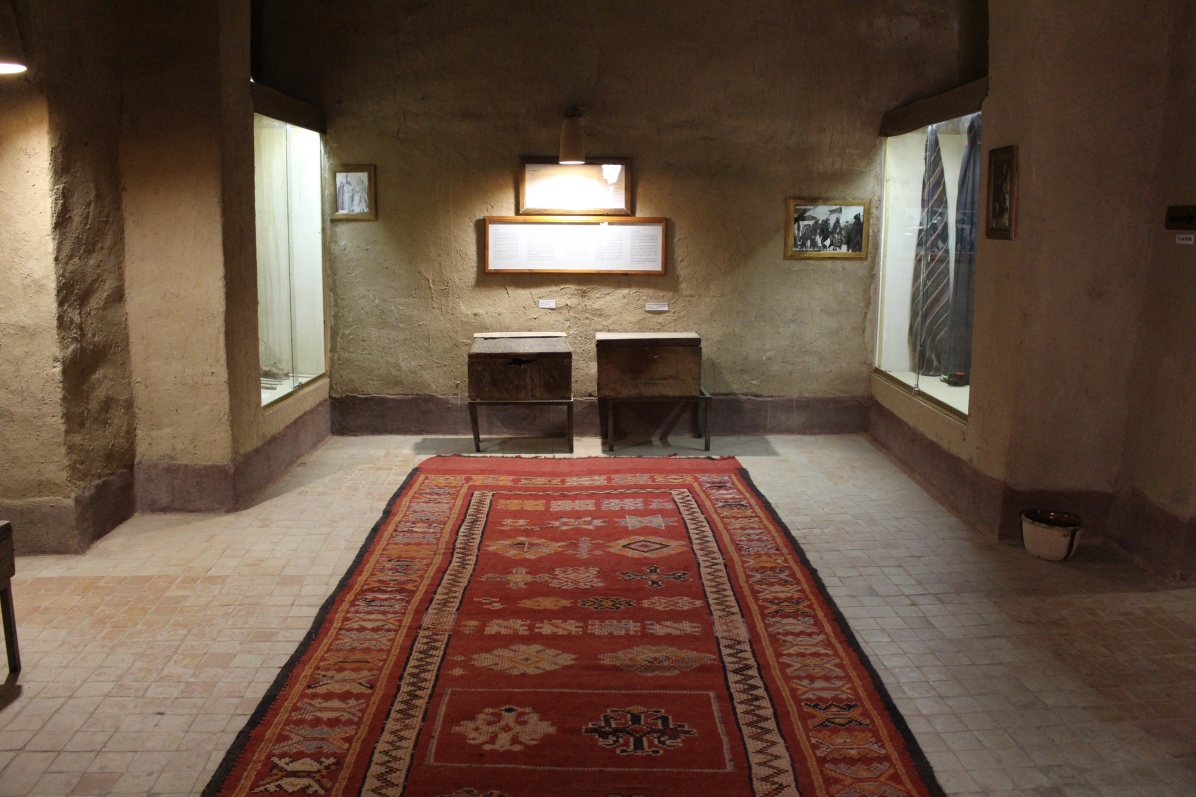 Each tribe had a special mode of dress and ornamentation.  Men dressed in wool or cotton gowns, the jellaba, or sometimes a cloak called azennar or selham, complemented with a leather shepherd’s bag and a dagger.  They tied a black or white turban on their head.

Women wrapped up with a shawl embroidered with pictures of their tribe.  The shawl covered the body and often the head, and sometimes even the face.  Tattoos on the face showed tribal membership. They wore a lot of silver jewelry.  Nowadays, tattoos are disappearing and jewelry is often made of gold. 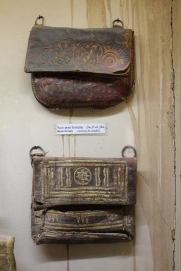 clothing for men and women

The Jewish population had a synagogue and a Hebrew cemetery in every Hebrew village.  Their activities included trade, money lending, silverwork, and other handicrafts.  Most of the Jewish population immigrated to Israel in 1967 as a consequence of the Six-Day War.

The Islamic population had a mosque in each village for noon prayers on Fridays.  There was usually a cemetery near the village, where the dead were buried wrapped in a white cloth, without a coffin, and laid on their right side to face Mecca.  Two stones on the ground showed the position of each grave. 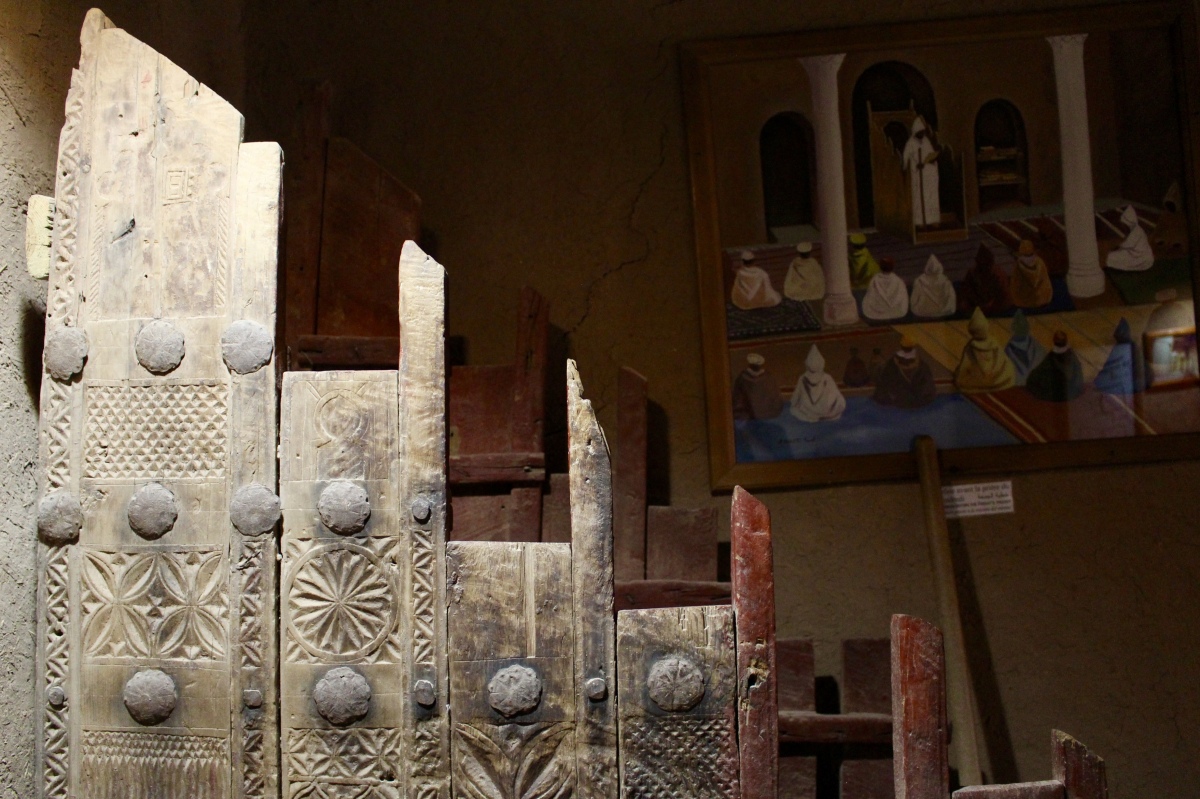 The basics of the diet were wheat flour, corn, flour and barley.  The women typically baked bread and made couscous for dinner.  For lunch, they ate vegetables and pieces of meat cooked in an oil sauce with spices added.  In the north Atlas, this mixture was prepared with a conic lid named a tagine.

Henna, an herb exported all over Morocco, was applied to wounds and skin illnesses (not always with good results), and it is today used by women to dye the palms of their hands, their feet, or their hair for aesthetic reasons and for good luck. 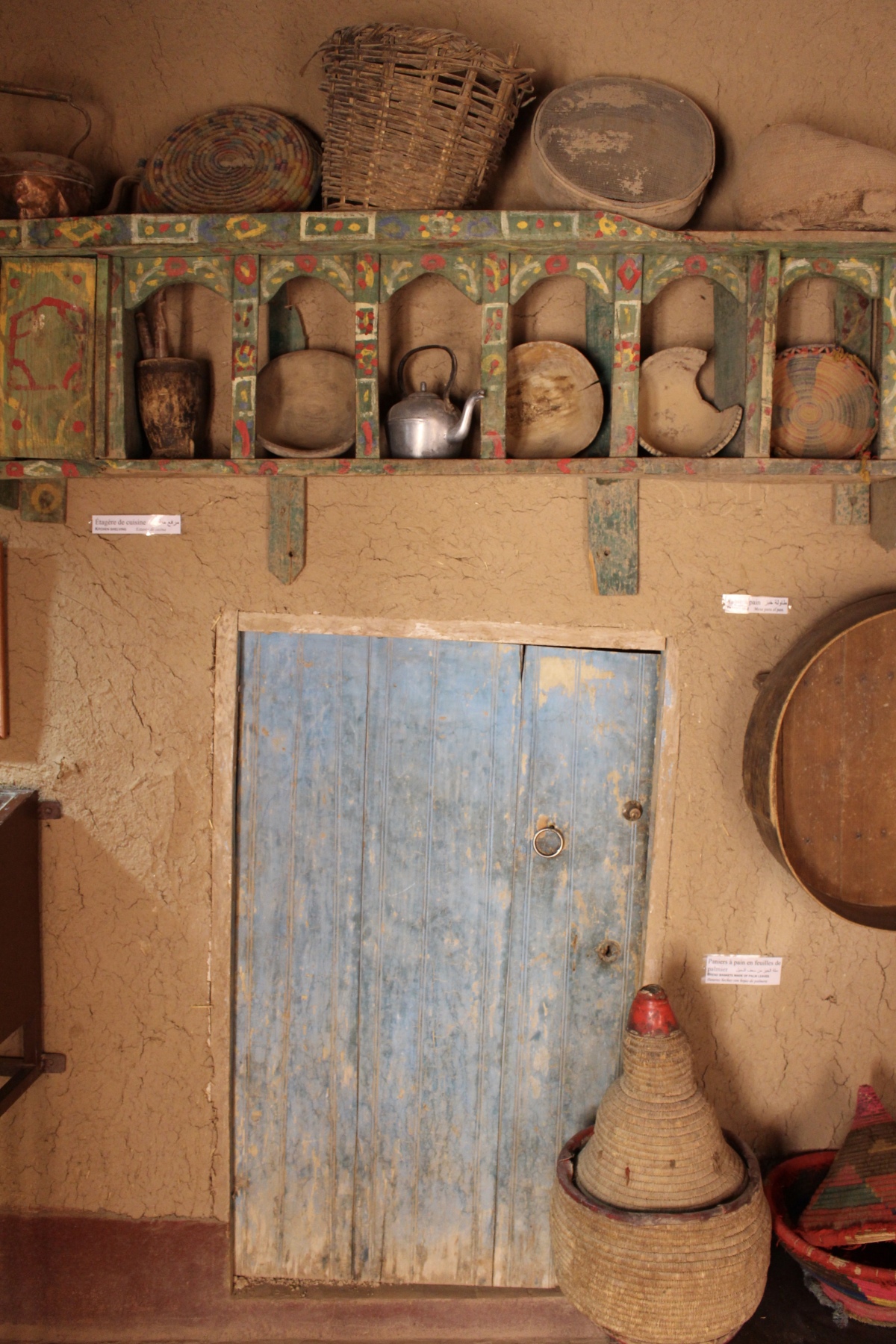 We walked around the preserved mudbrick buildings, which again reminded me of Oman. 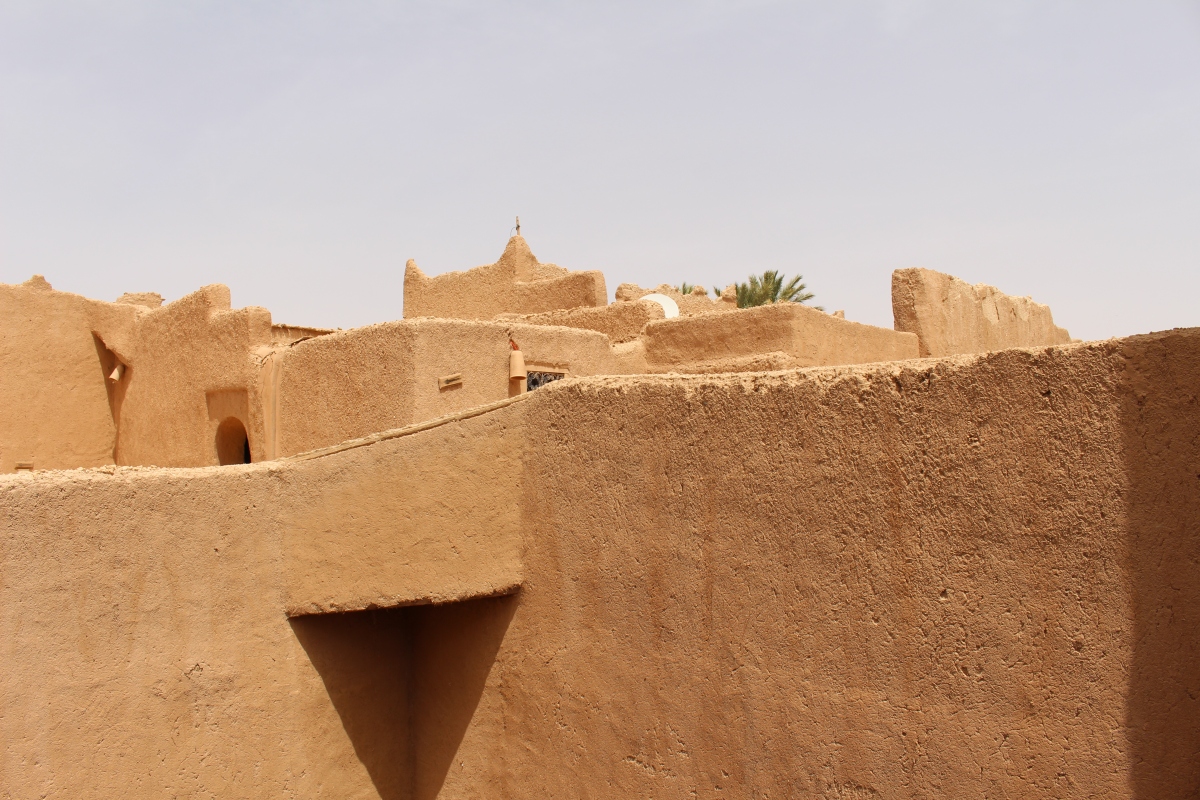 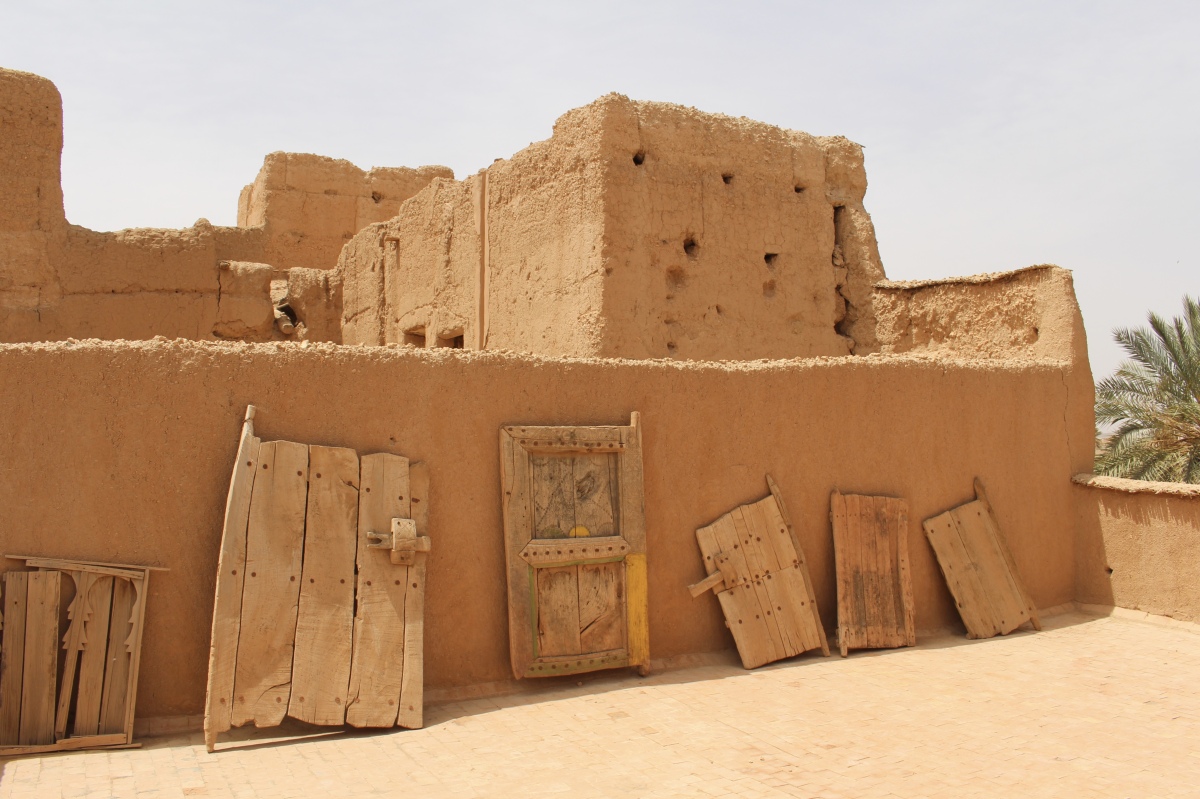 Finally, I came across some paintings that showed the design and decor of a typical Berber home.

We left El Khorbat at 2:20, and had another hour to our hotel in Tinghir. 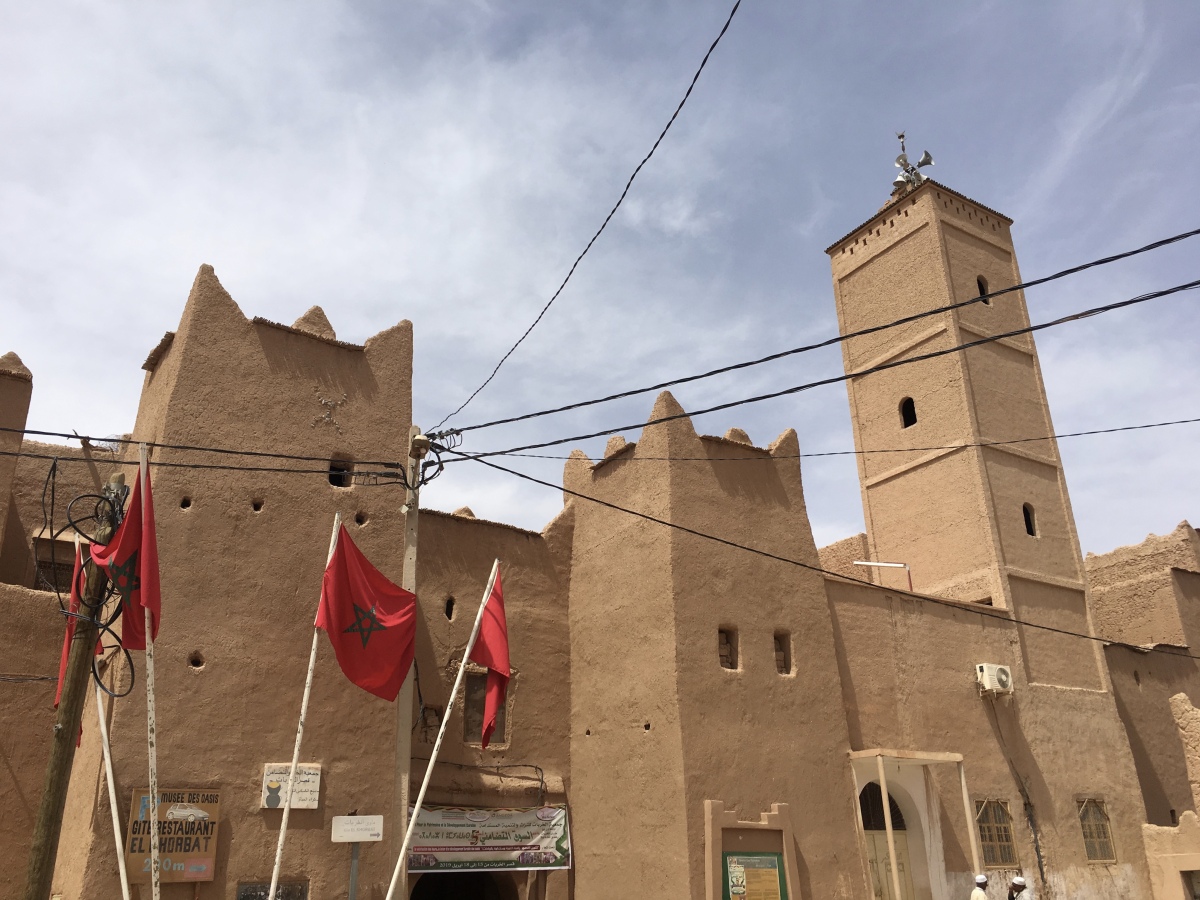 On the way, we stopped at a Pharmacie as Susan had a tickle in her throat and René had developed a head cold.  We left the little village with its Boulangerie and Patisserie.  All around was red dirt and a rock desert.

This post is in response to Jo’s Monday Walk: Over the Border.