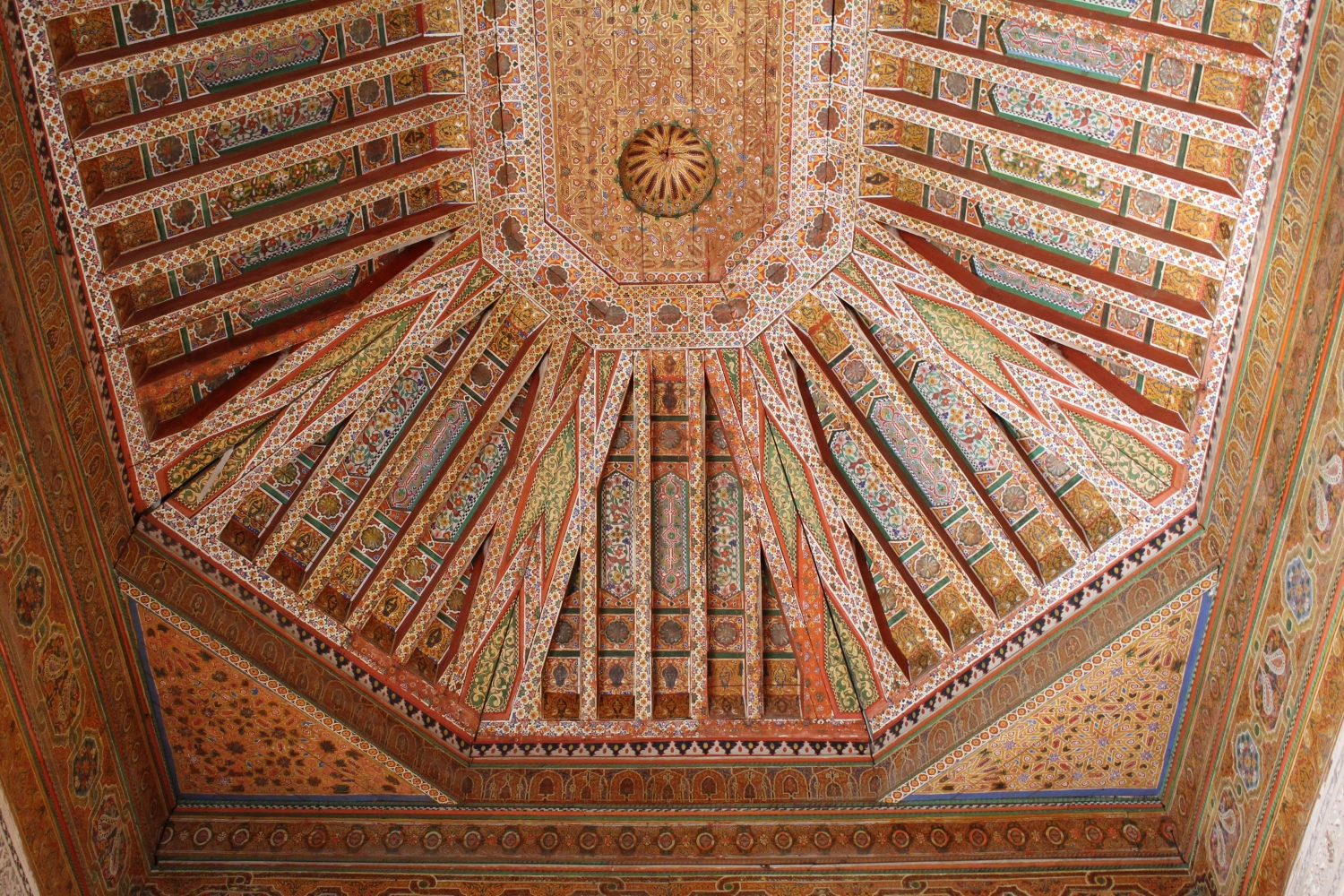 The country is dotted with mosques, marked by minarets that reach for the clouds, walls and fountains covered in green and white zellij, and an adorned mihrab, a niche indicating the direction to Mecca in stucco and marble.

Riads are traditional homes focused inward with courtyards in the center. Built in the heart of the courtyard, living room or guest room, a marble or cement fountain is a conspicuous feature.

A kasbah is a a fortified home made for a ruling family.  A ksar is a fortified tribal village with tan building exteriors that blend into the surrounding desert landscape. They are massive structures, often built with mud-clay from riverbanks.

The Hassan II mosque in Casablanca was built by the late King Hassan II to commemorate his 60th birthday.  It was built in six years, from 1987-1993.  The 210-meter minaret is the tallest building in the country and the tallest minaret in the world.  In the mosque’s vast prayer hall are amazing wood carvings, zellij and stucco molding.  A team of over 6,000 master craftsmen carved intricate patterns and designs in cedar from the Middle Atlas, marble from Agadir, and granite from Tafraoute. 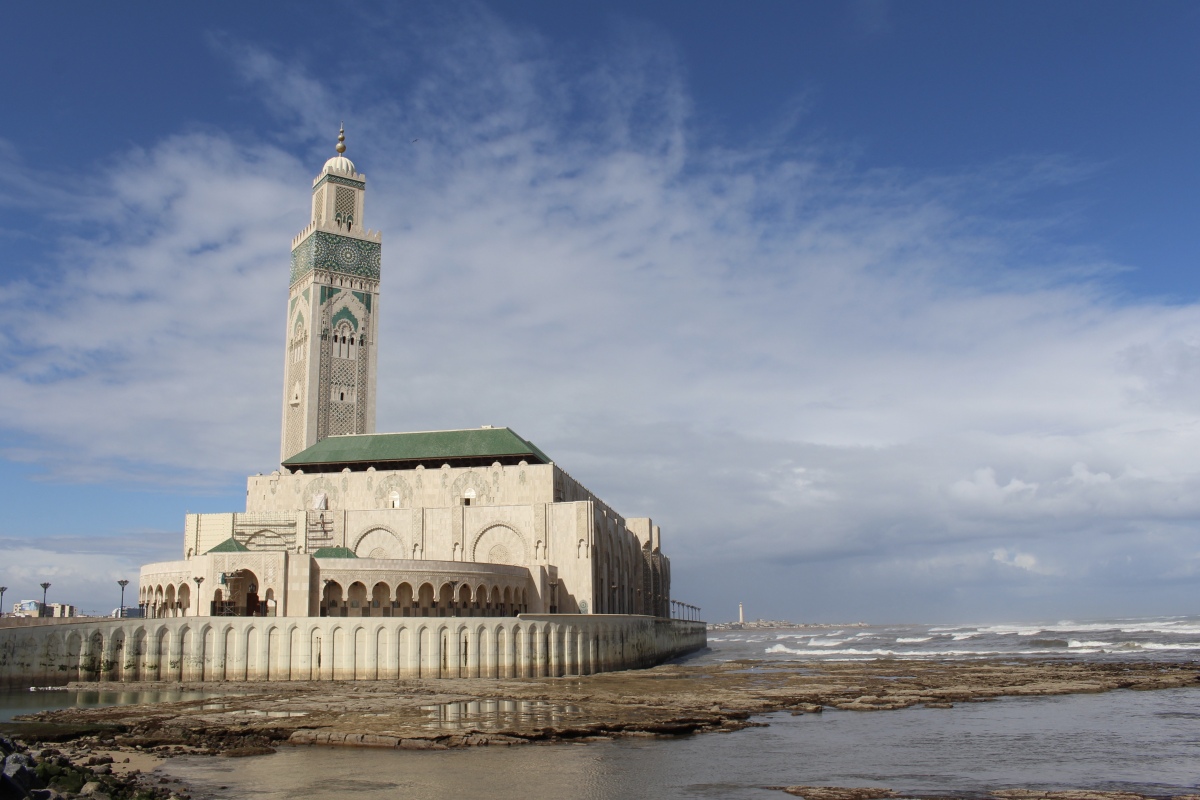 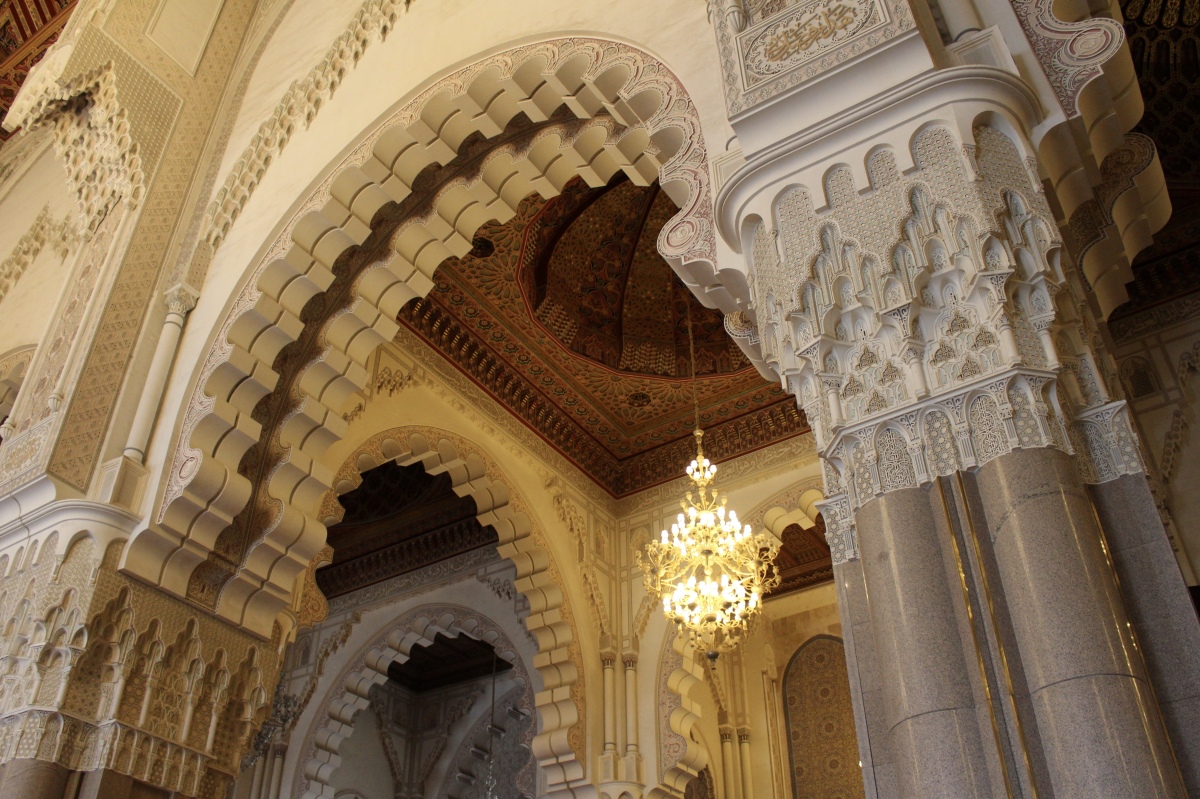 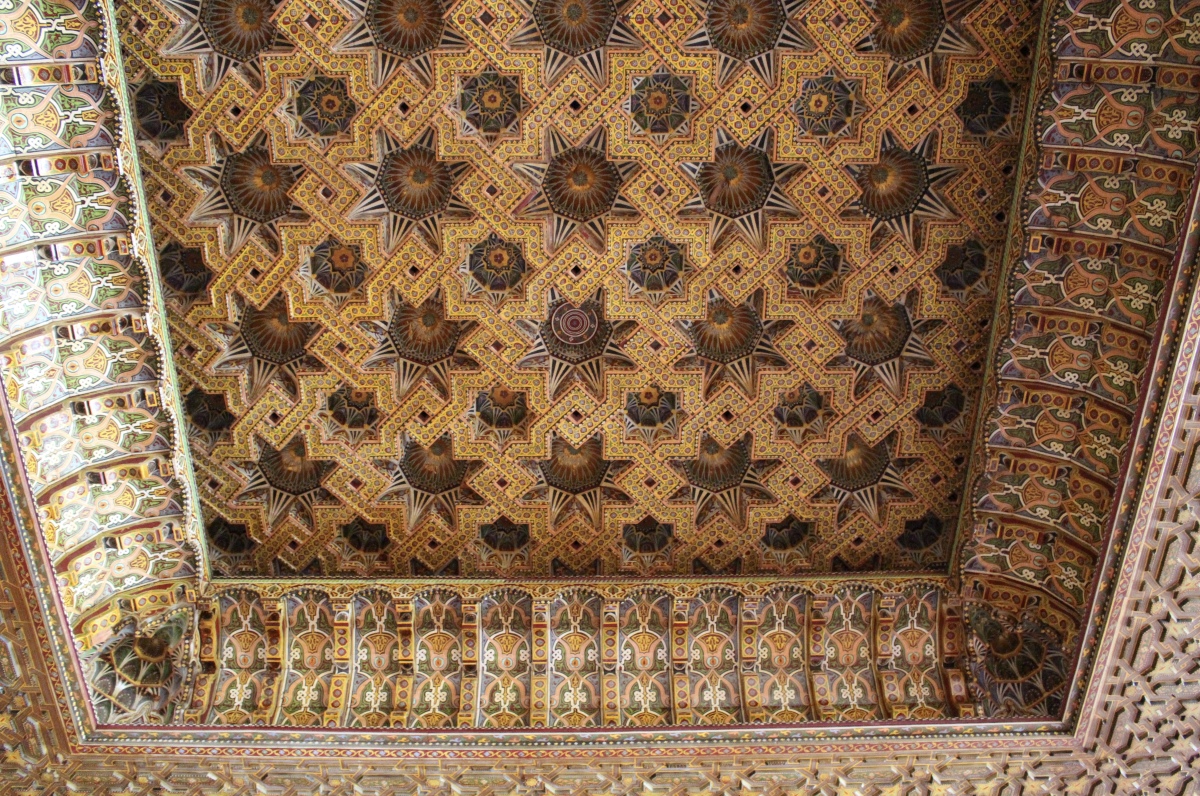 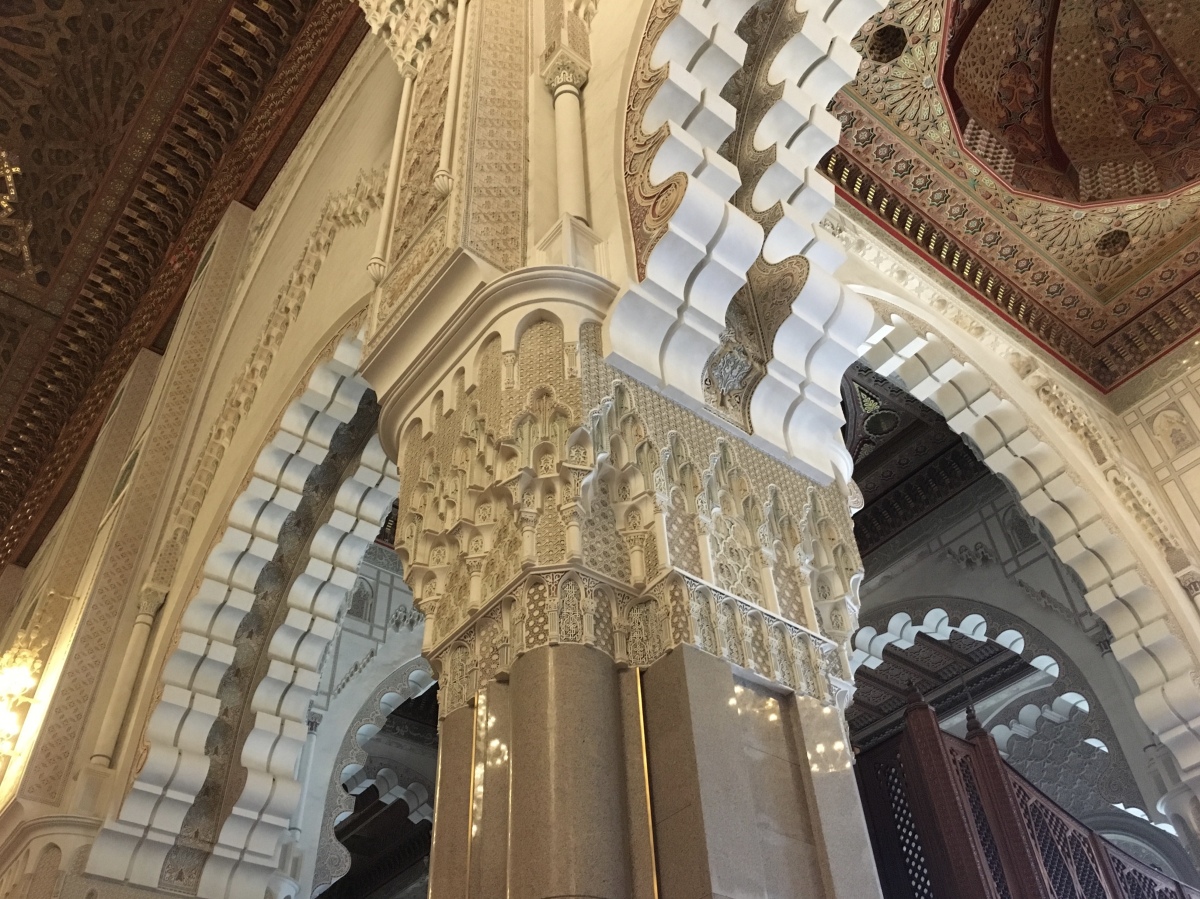 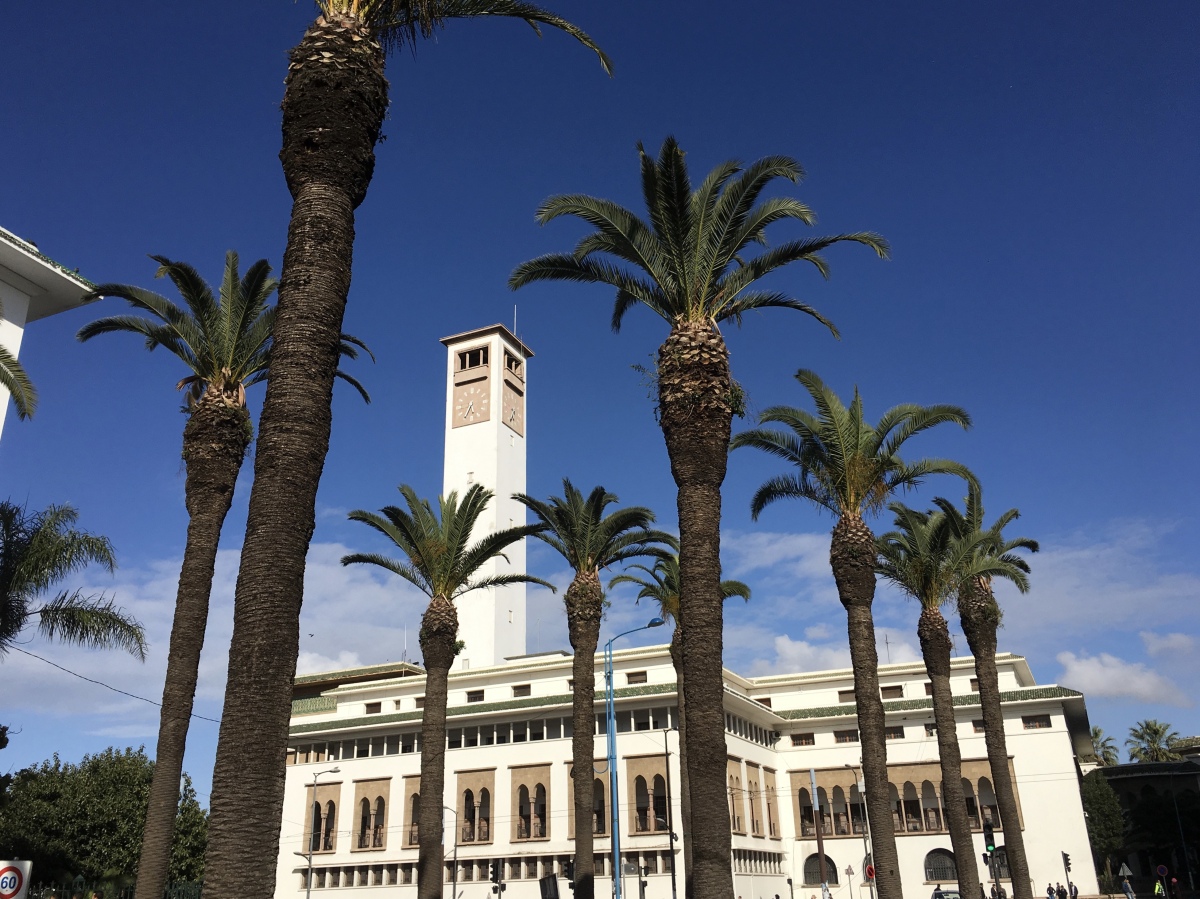 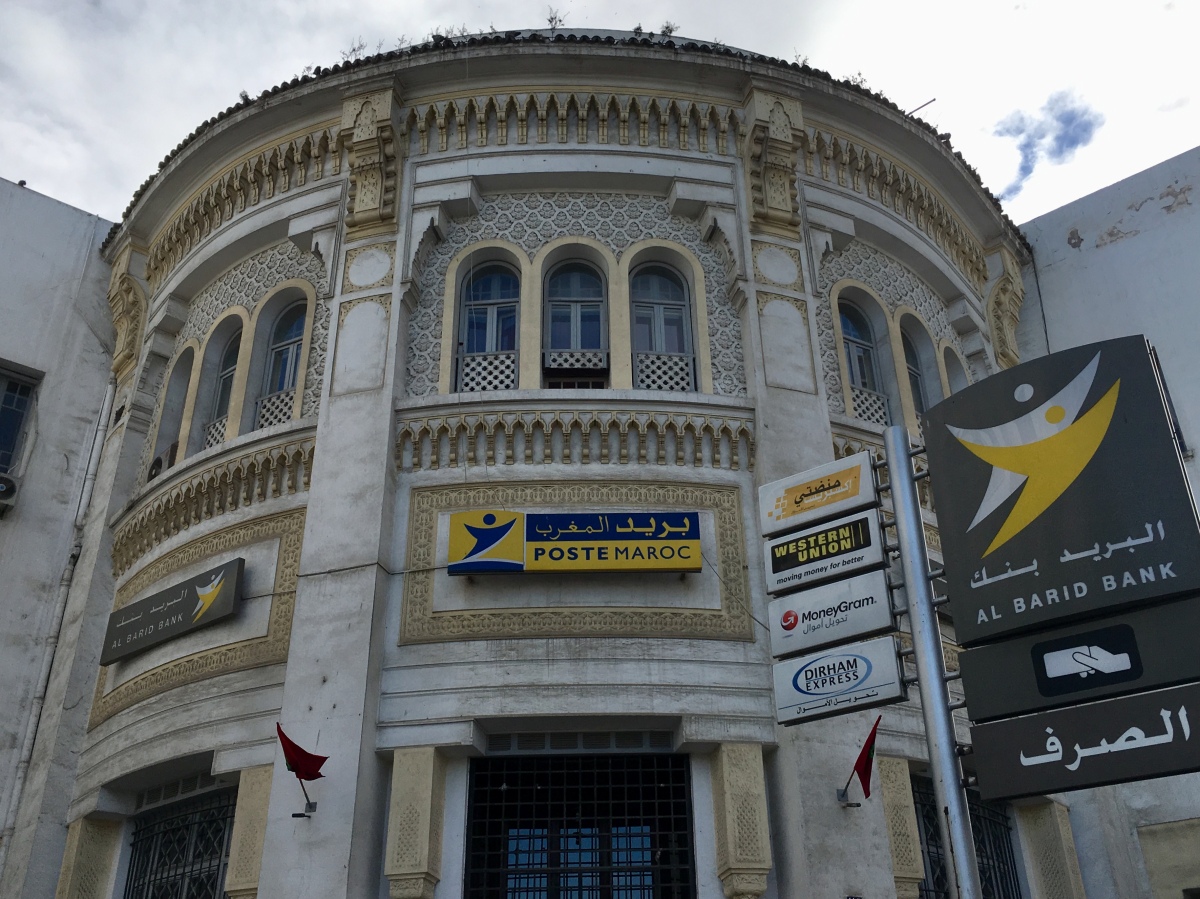 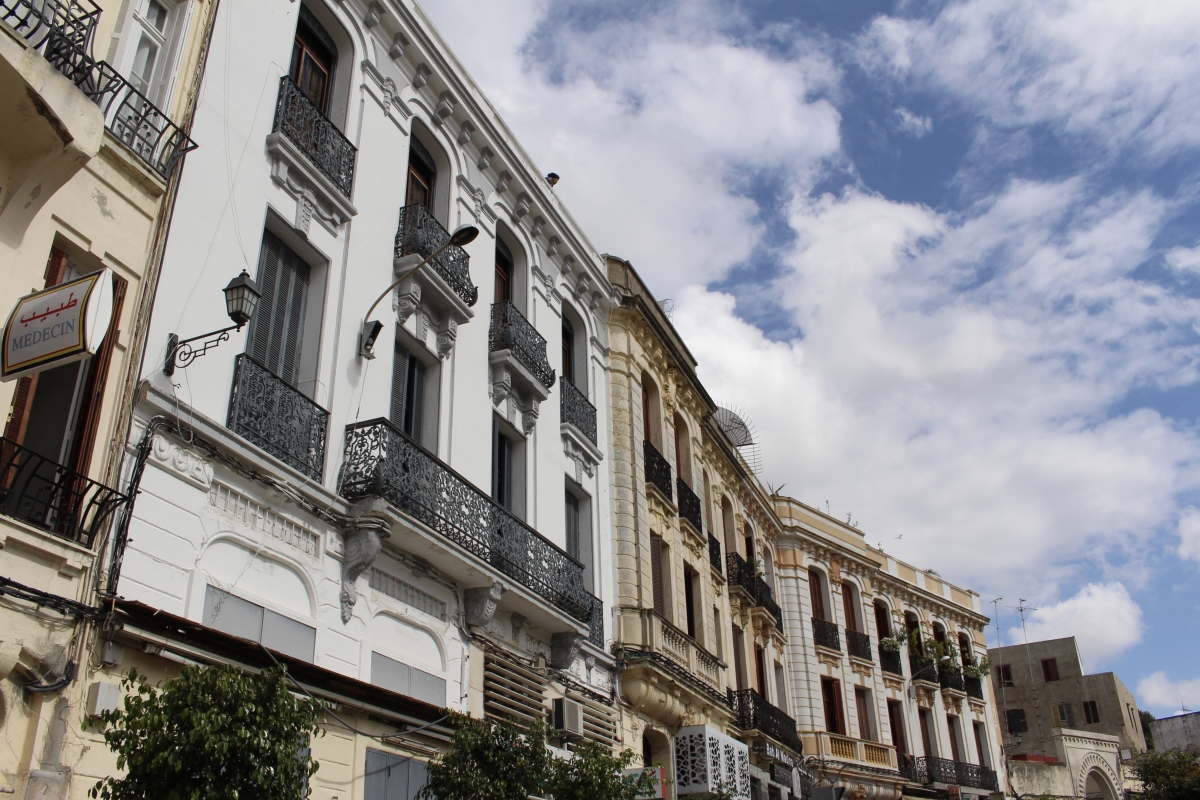 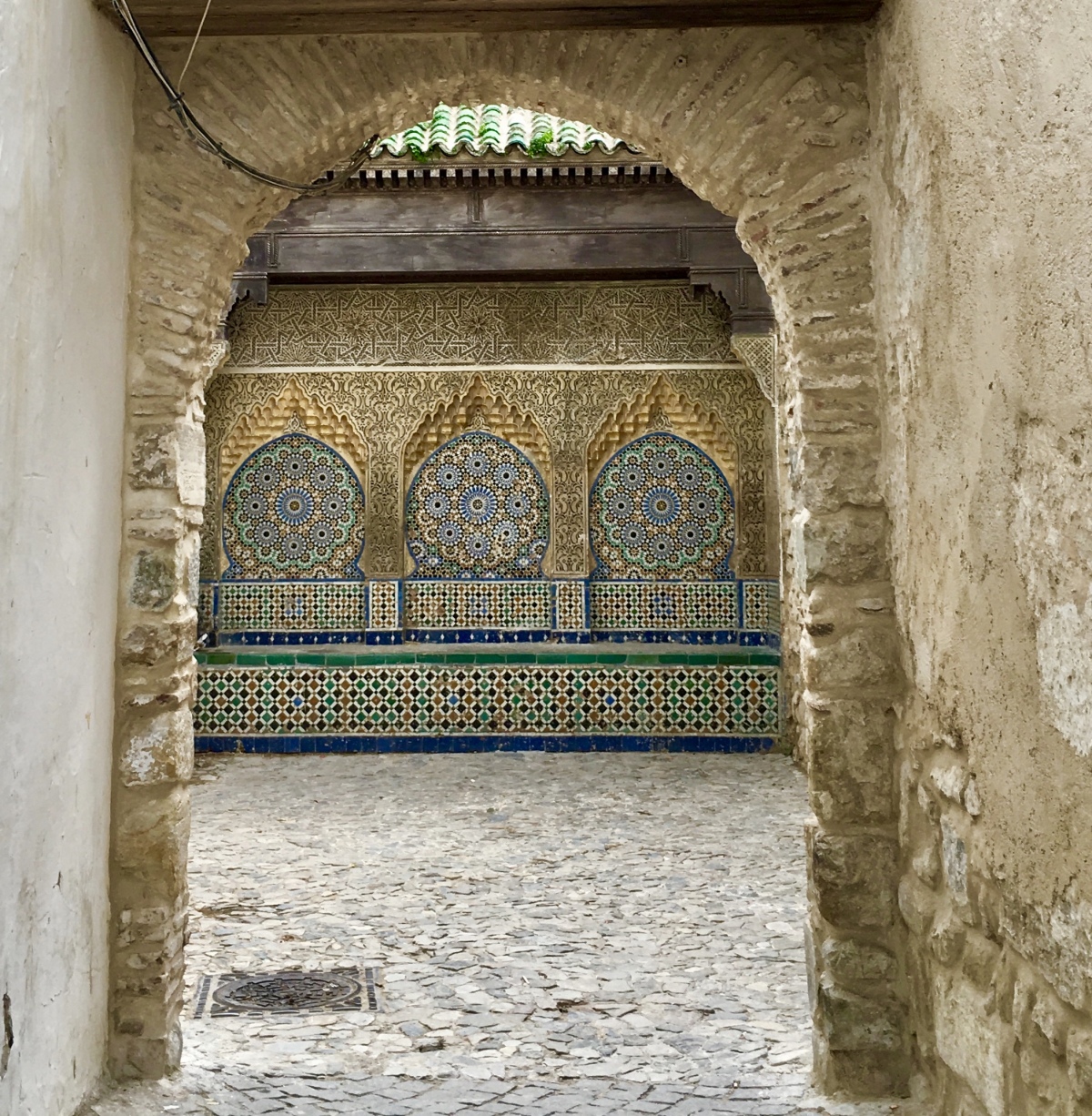 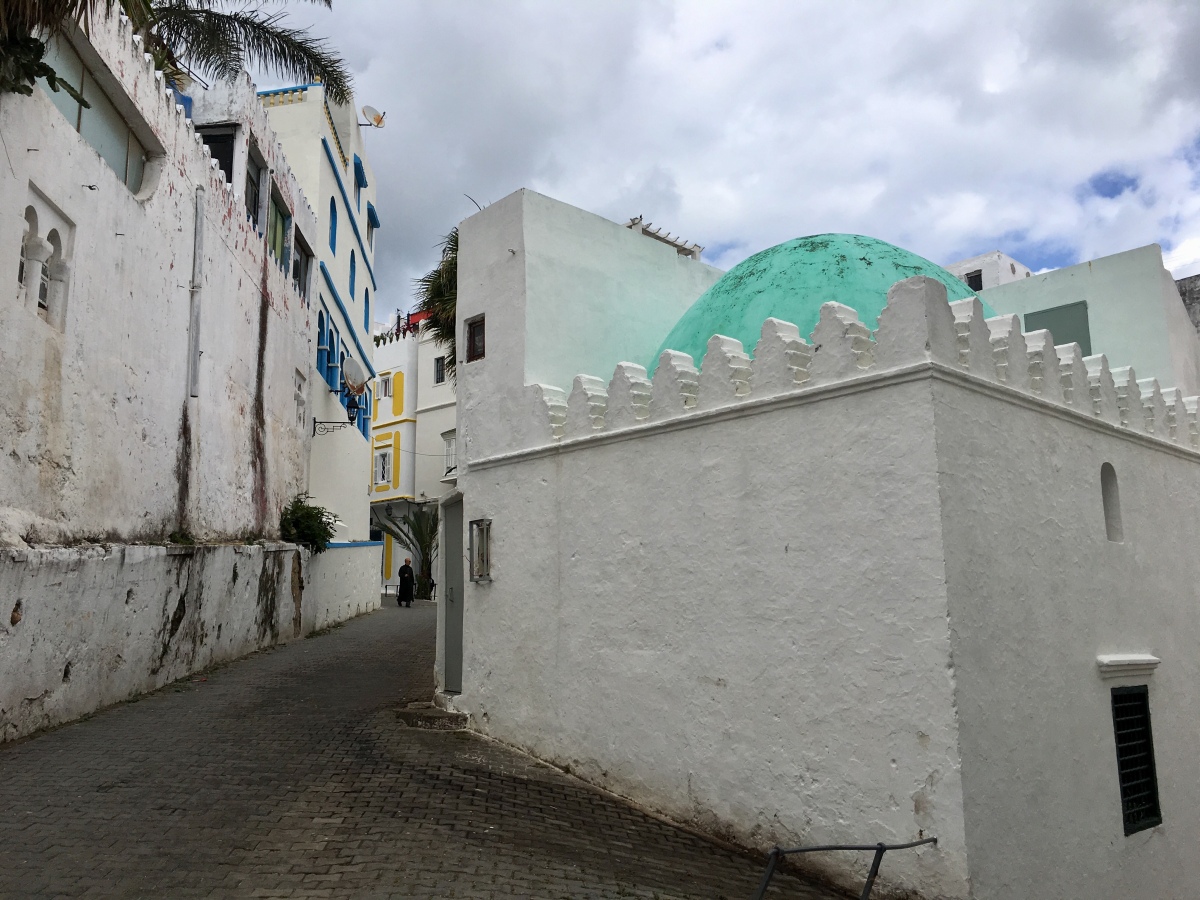 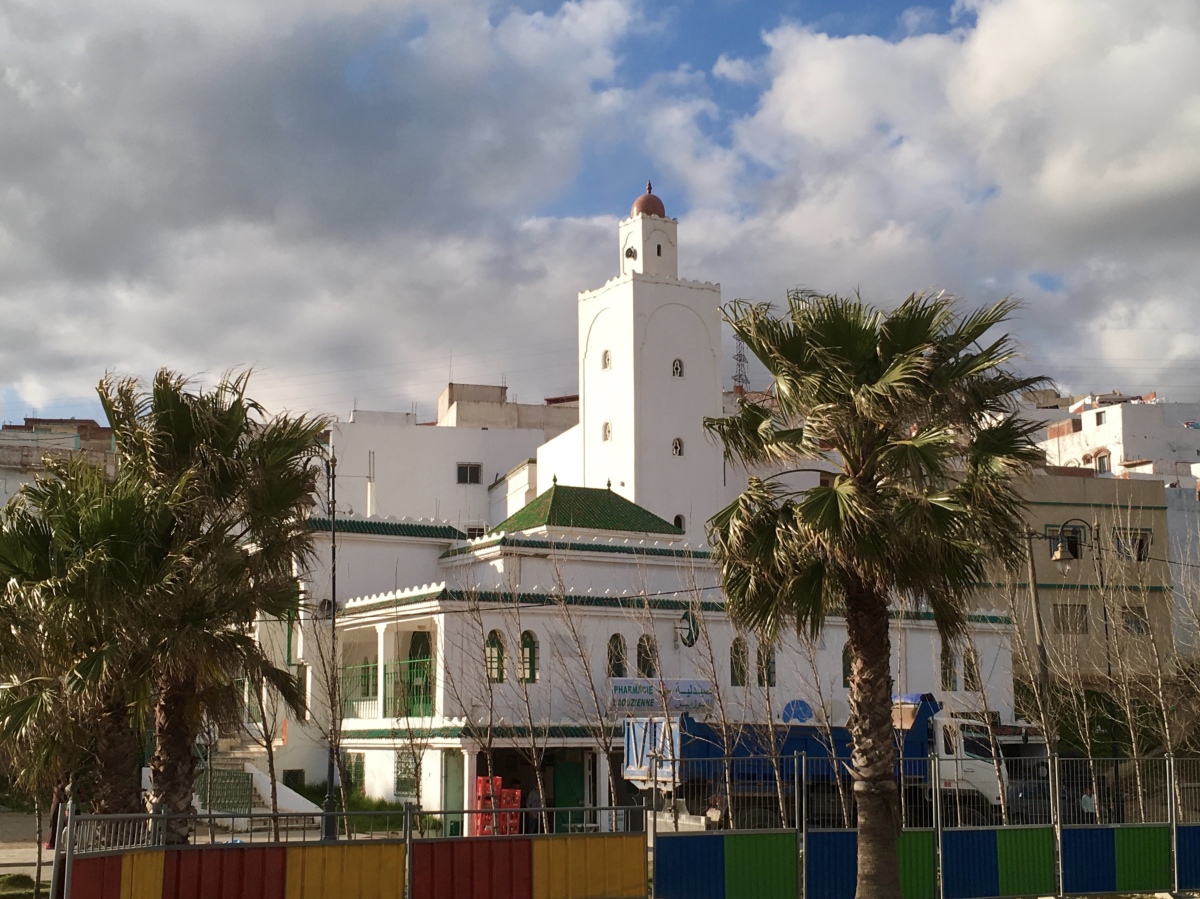 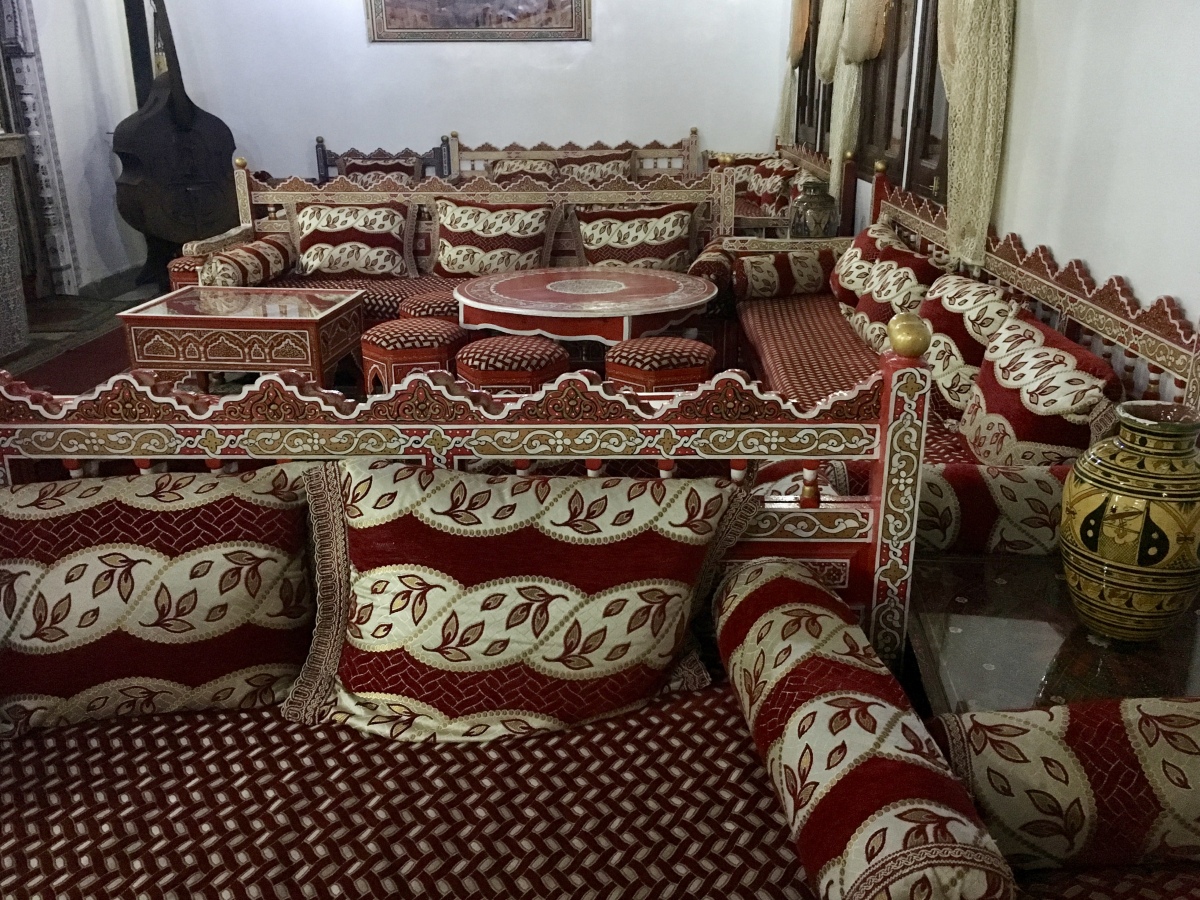 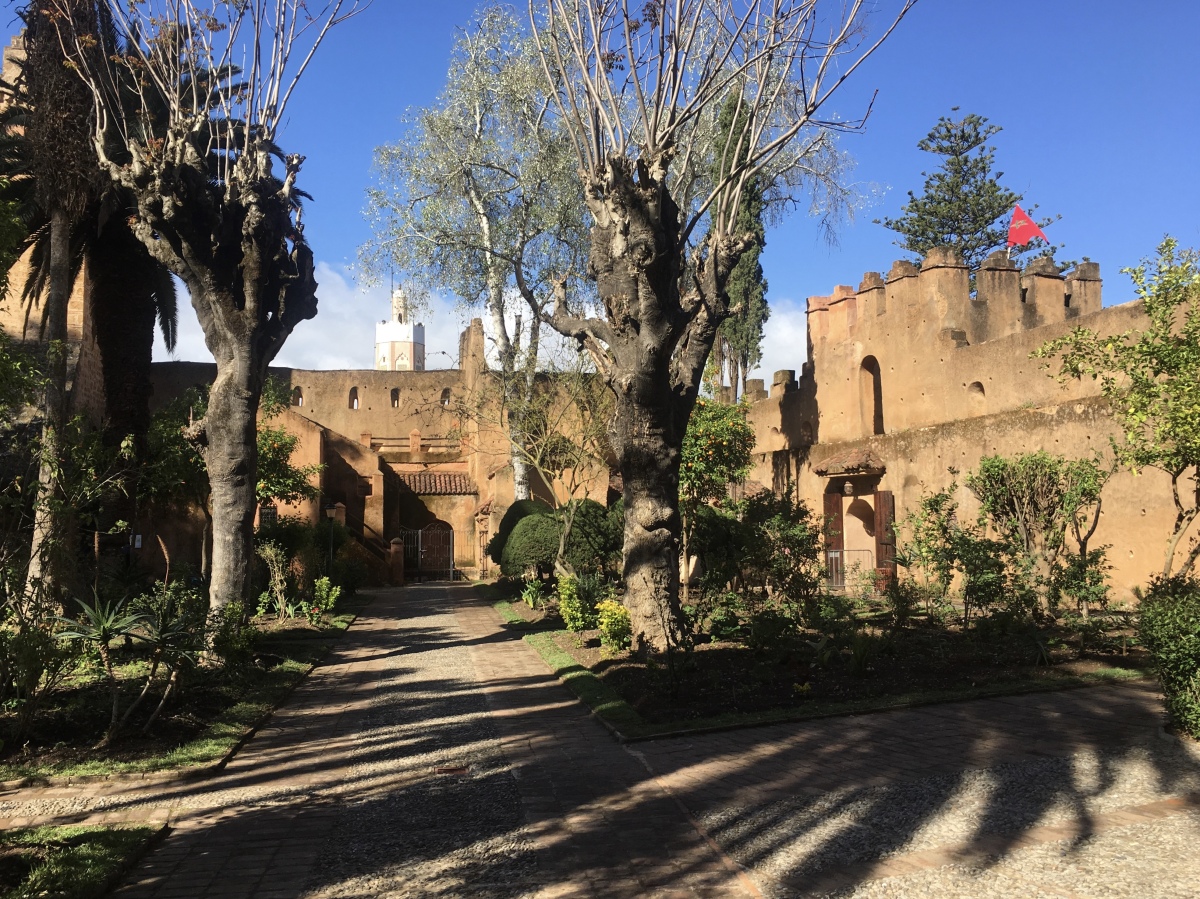 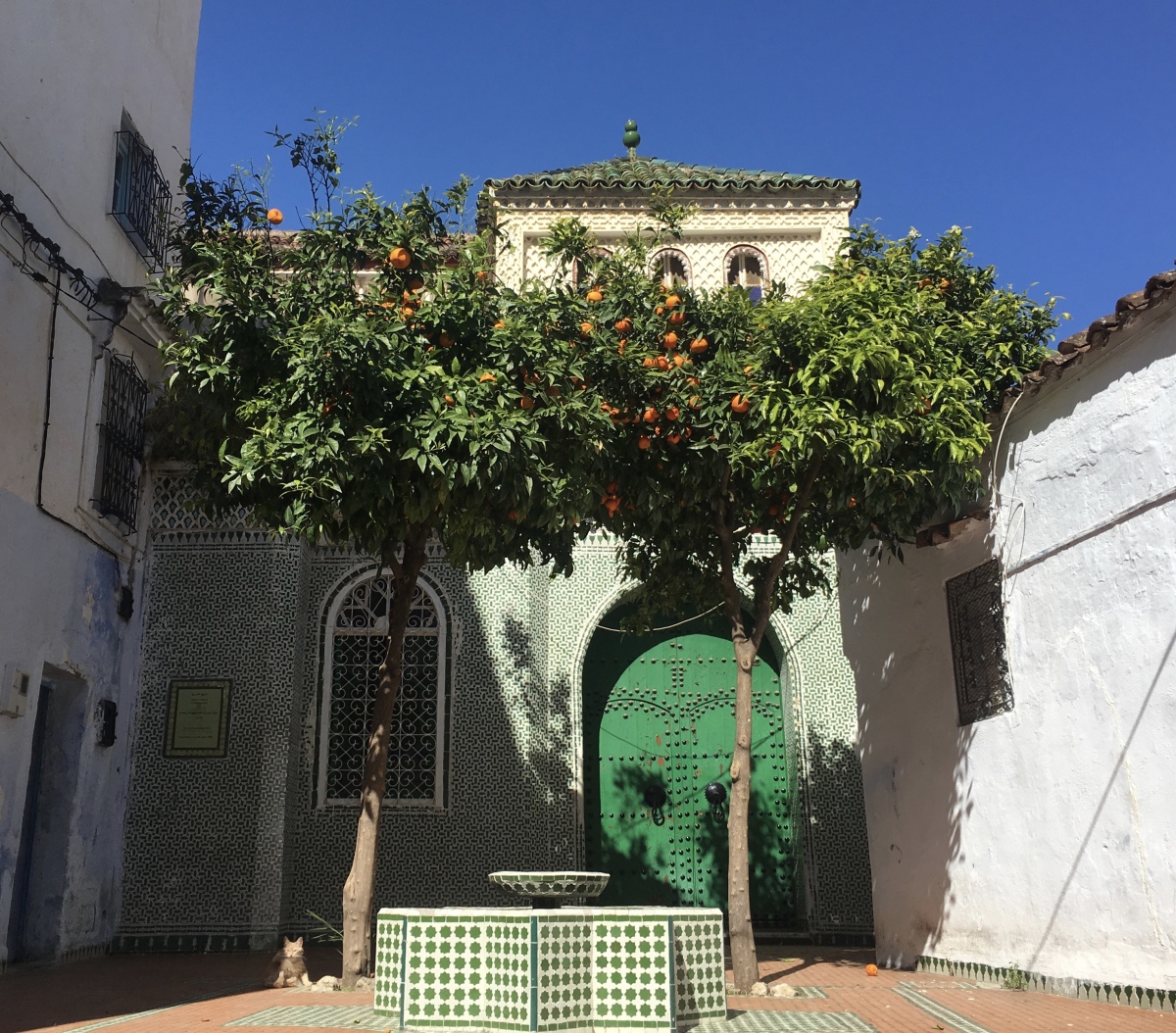 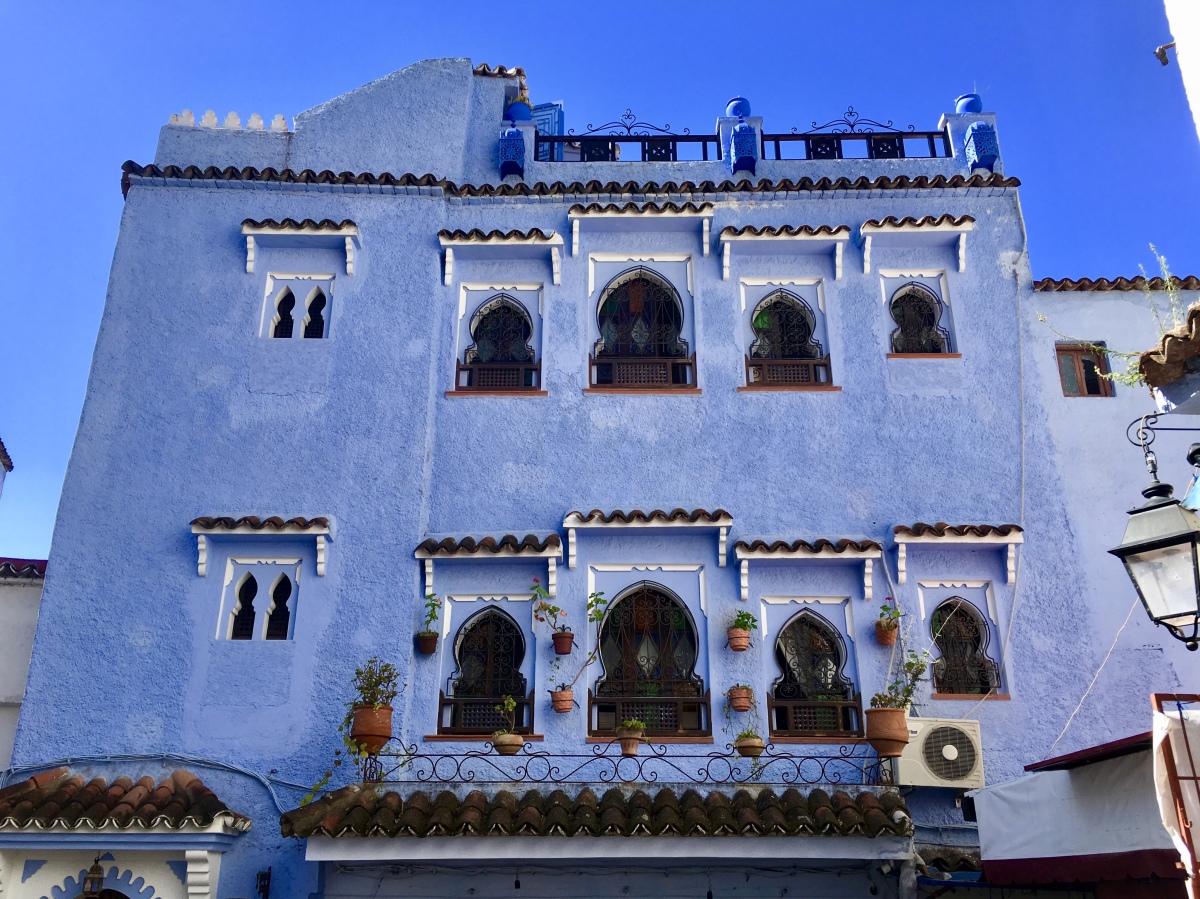 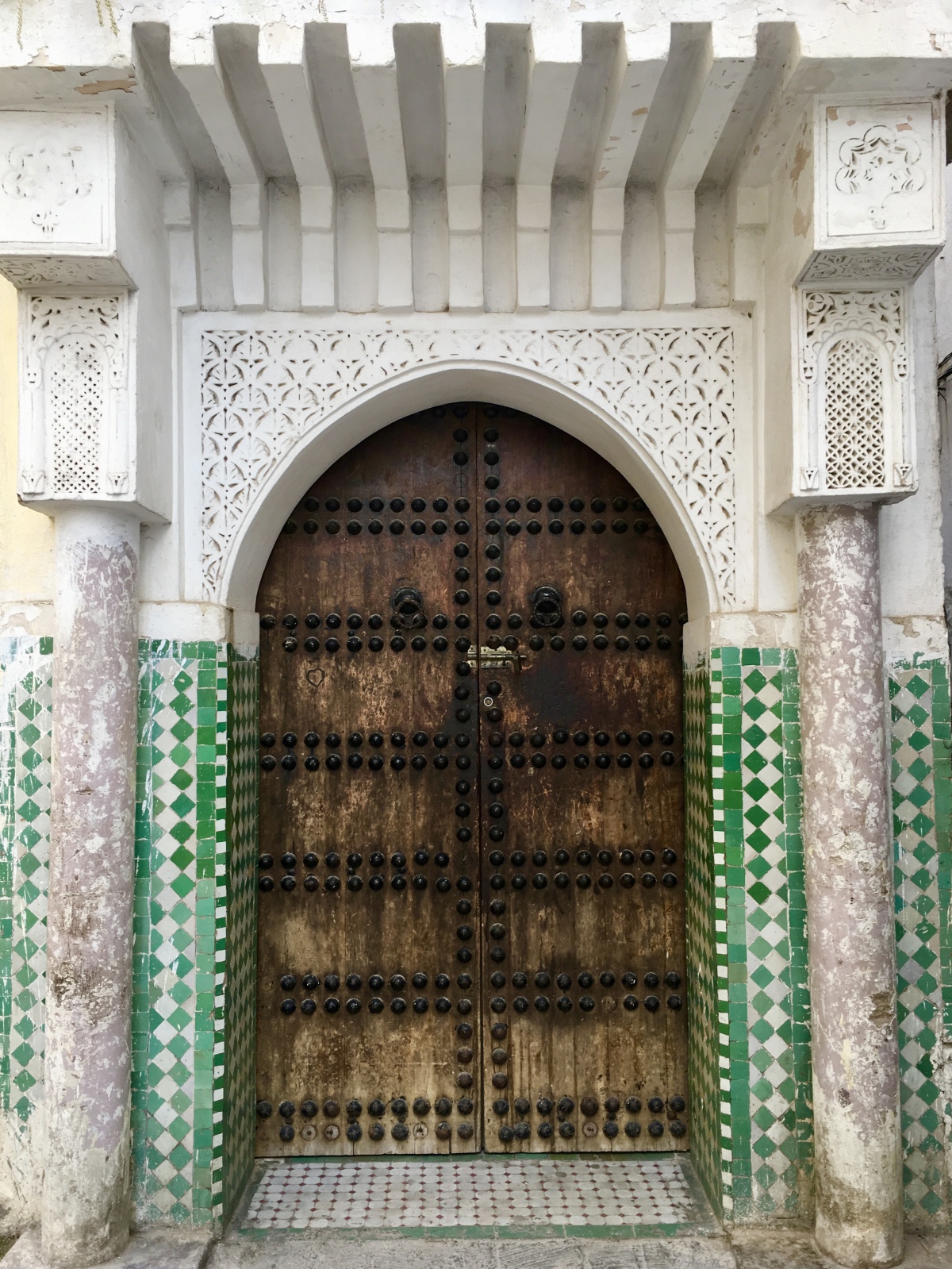 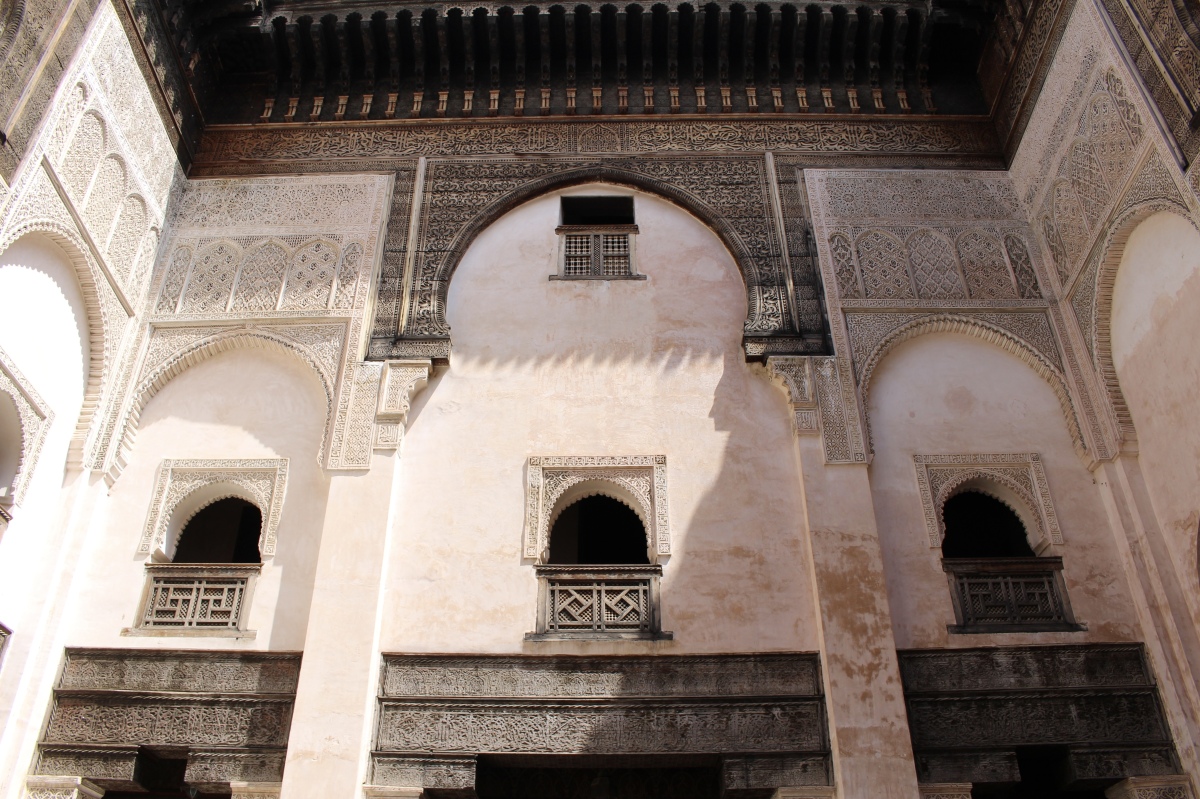 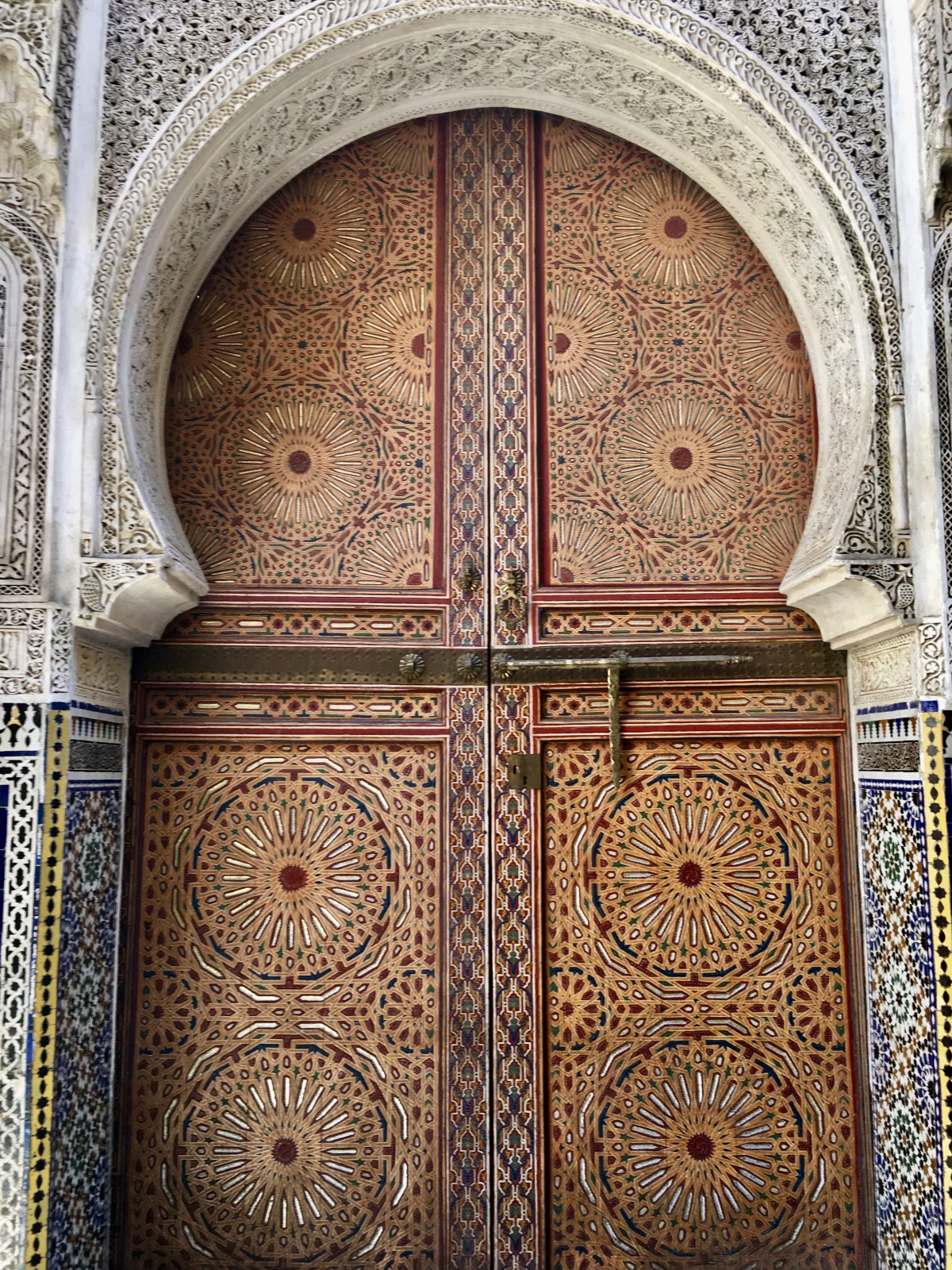 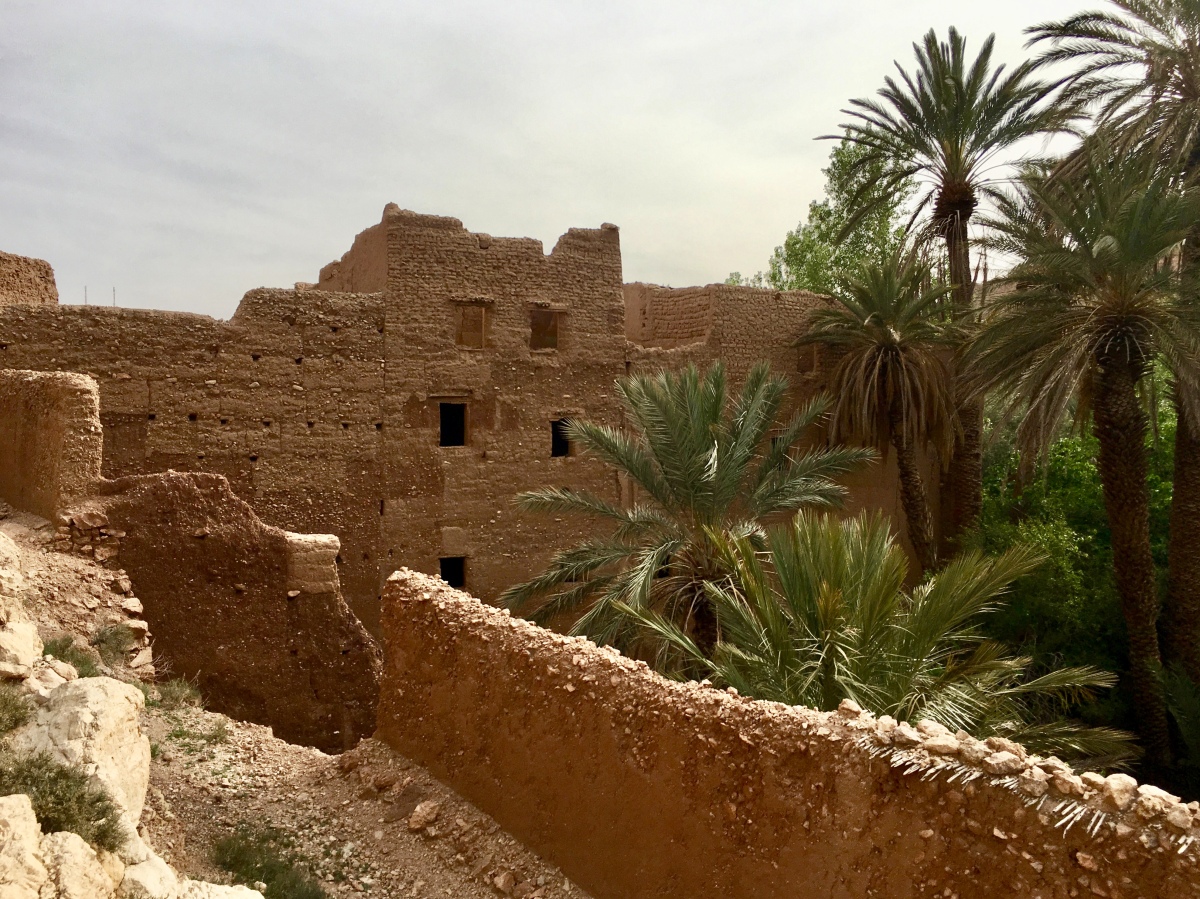 The ksar is a group of earthen buildings crowded together within defensive walls, reinforced by corner towers. Aït-Ben-Haddou, in Ouarzazate province, is a striking example of the architecture of southern Morocco. 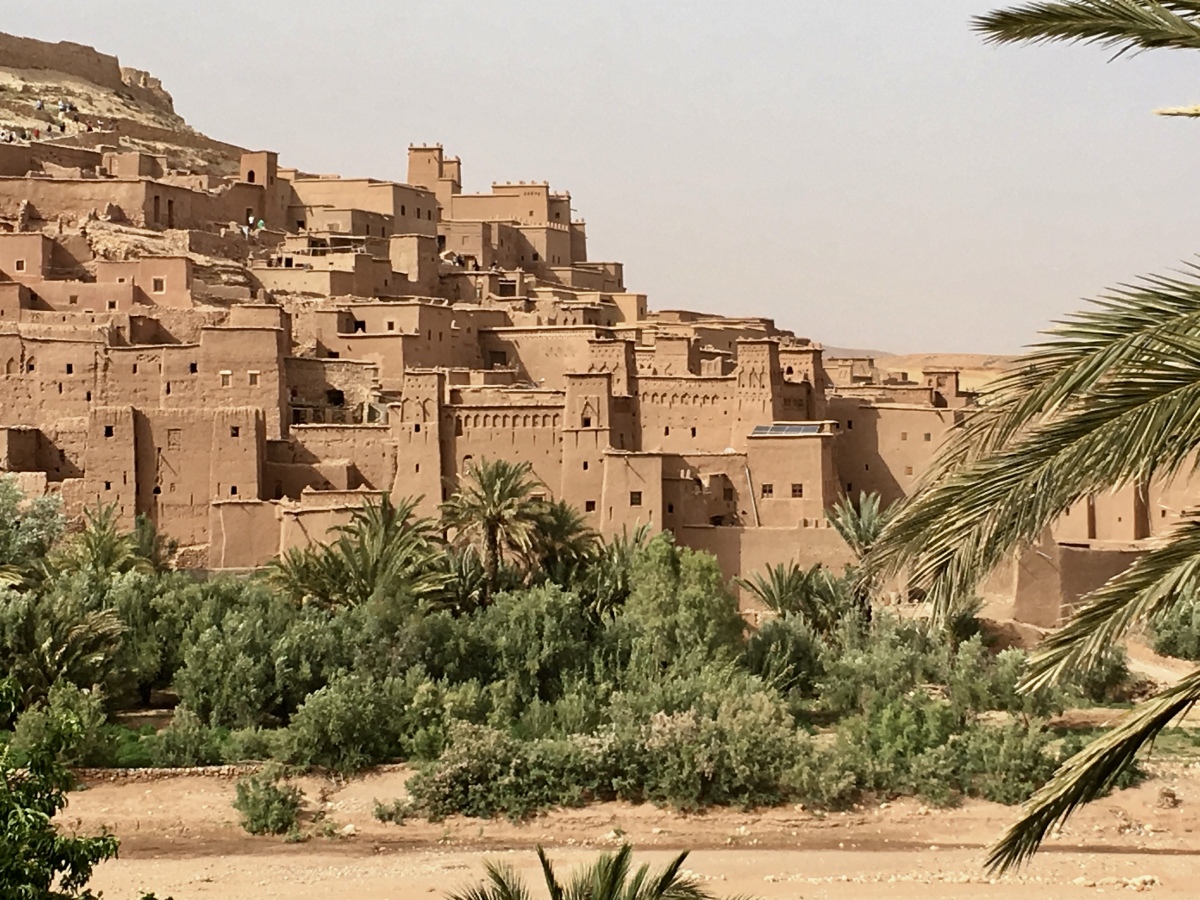 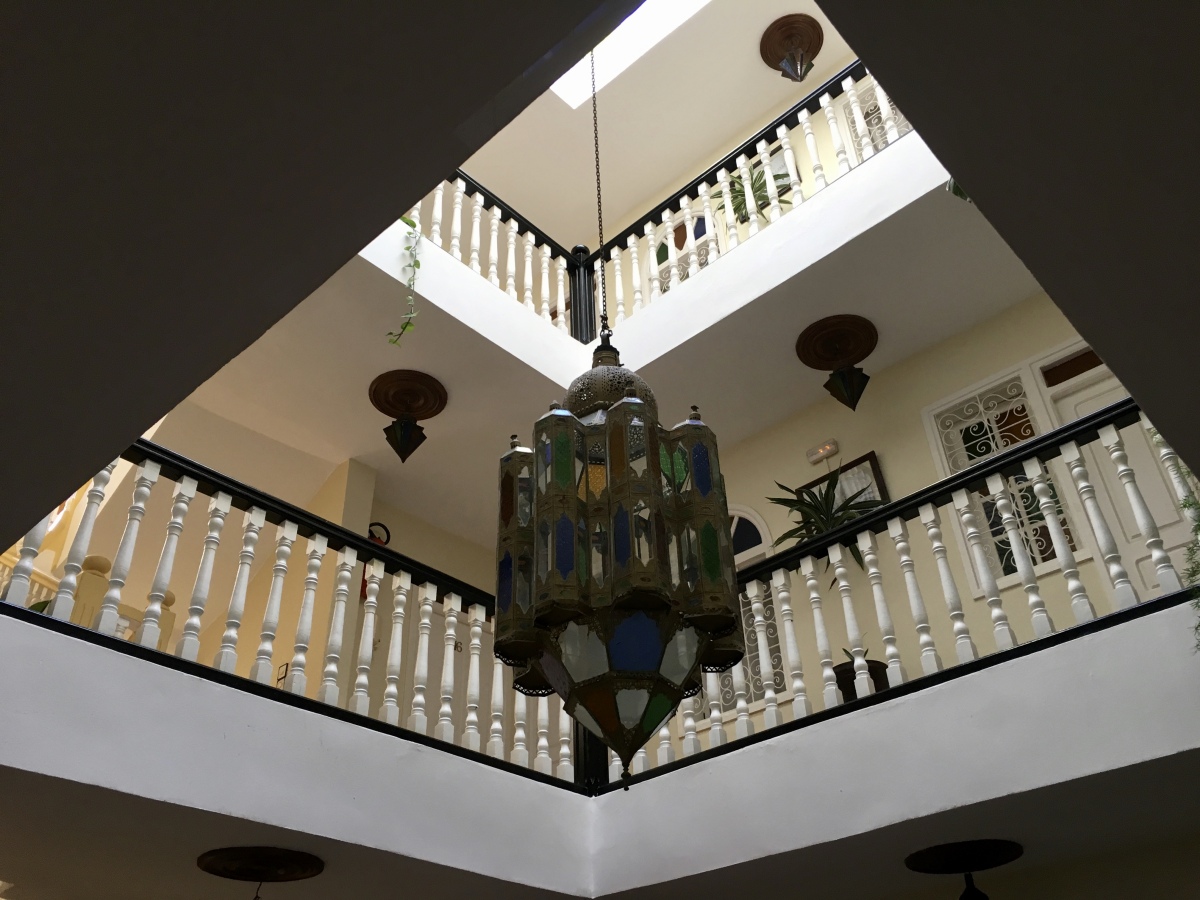 Bahia Palace is a palace and gardens in the Marrakech medina.  It was commissioned sometime between 1859-1873 and was completed in 1900. 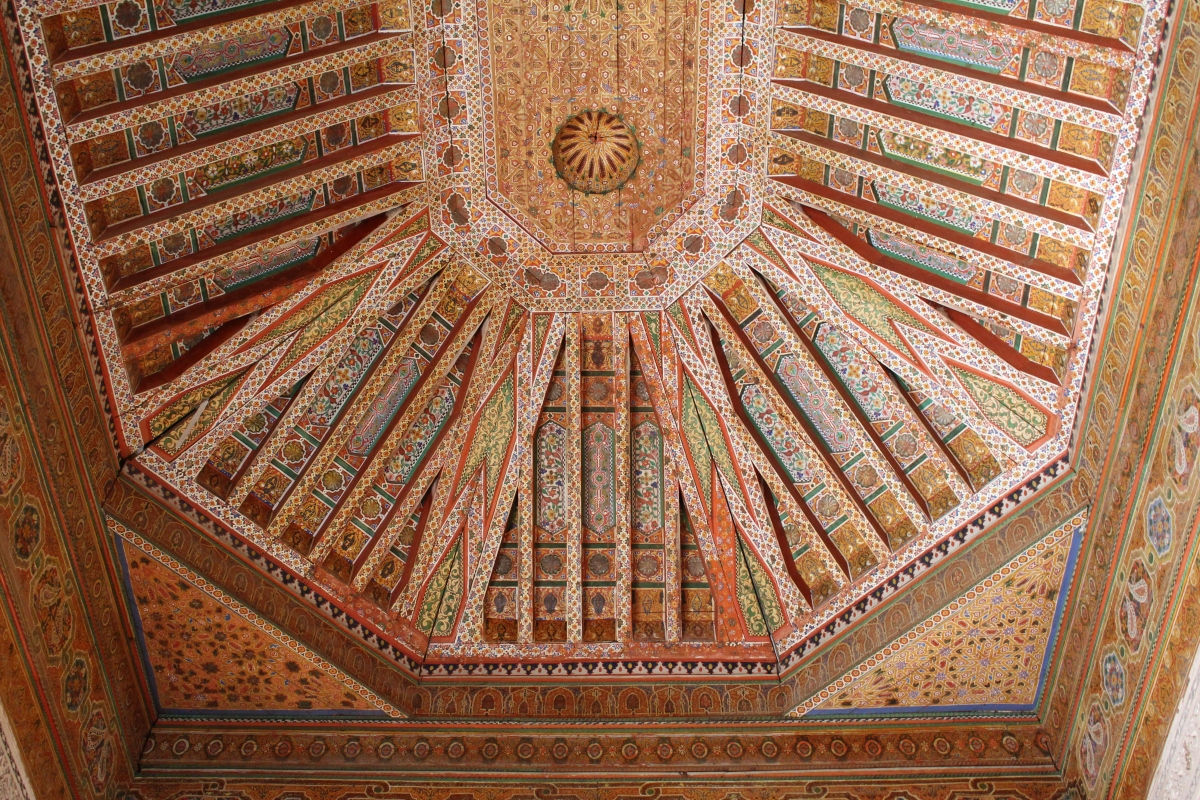 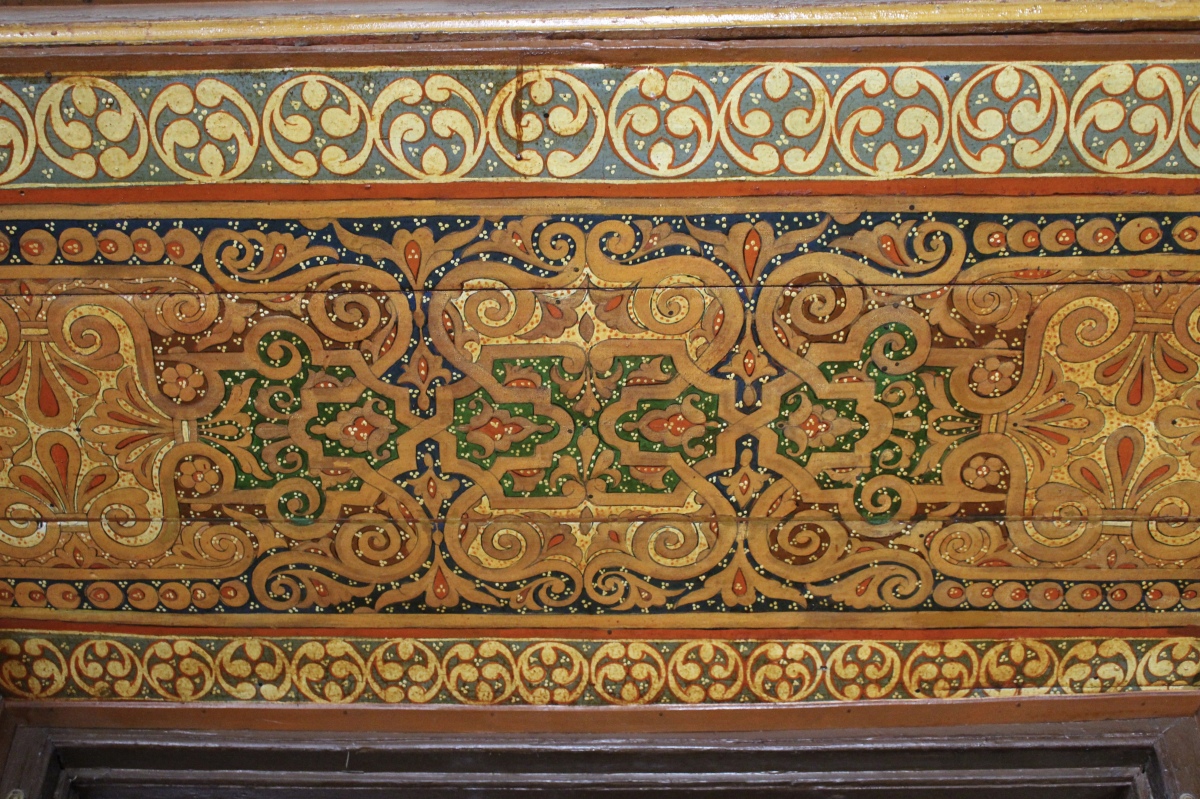 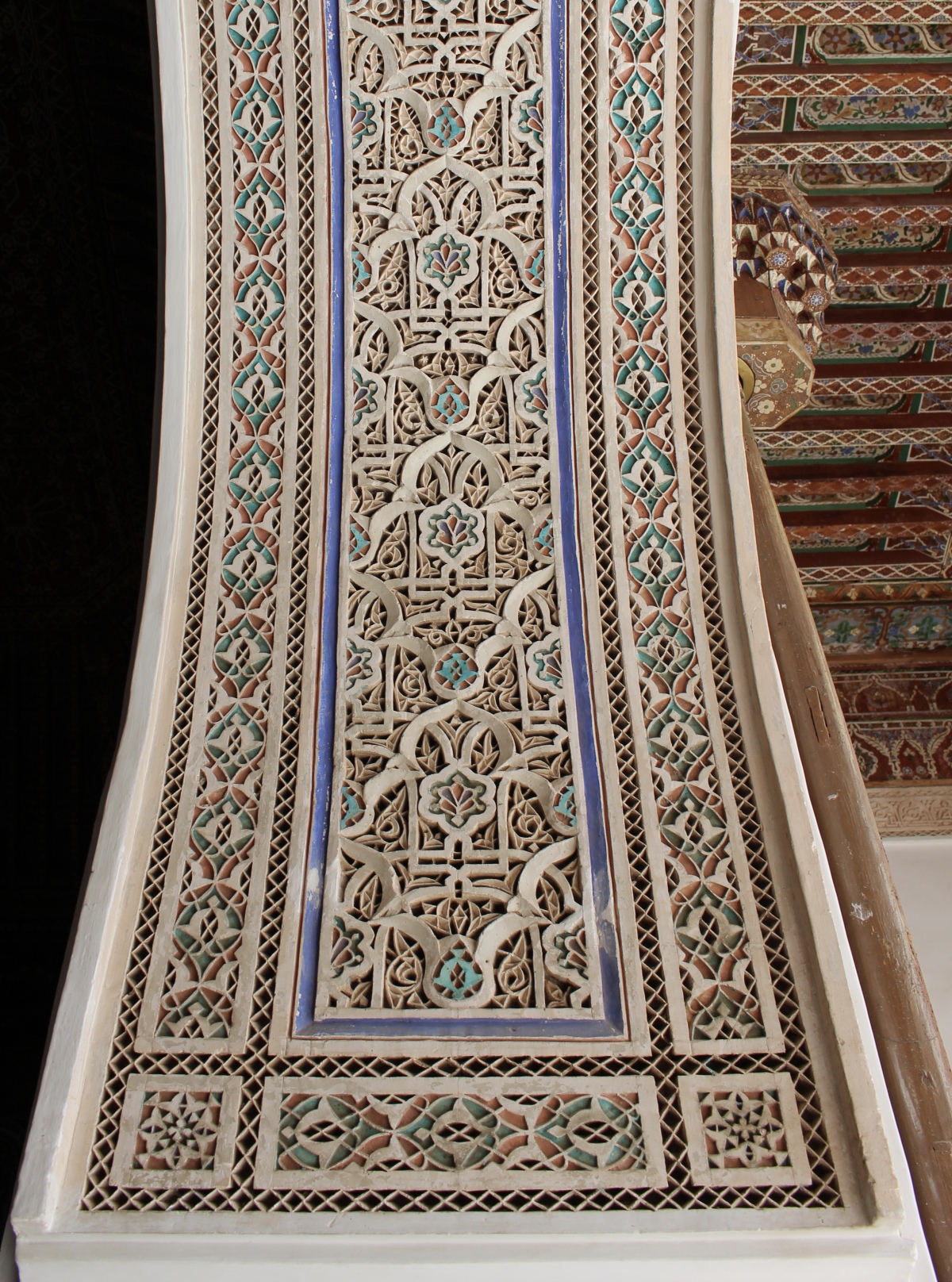 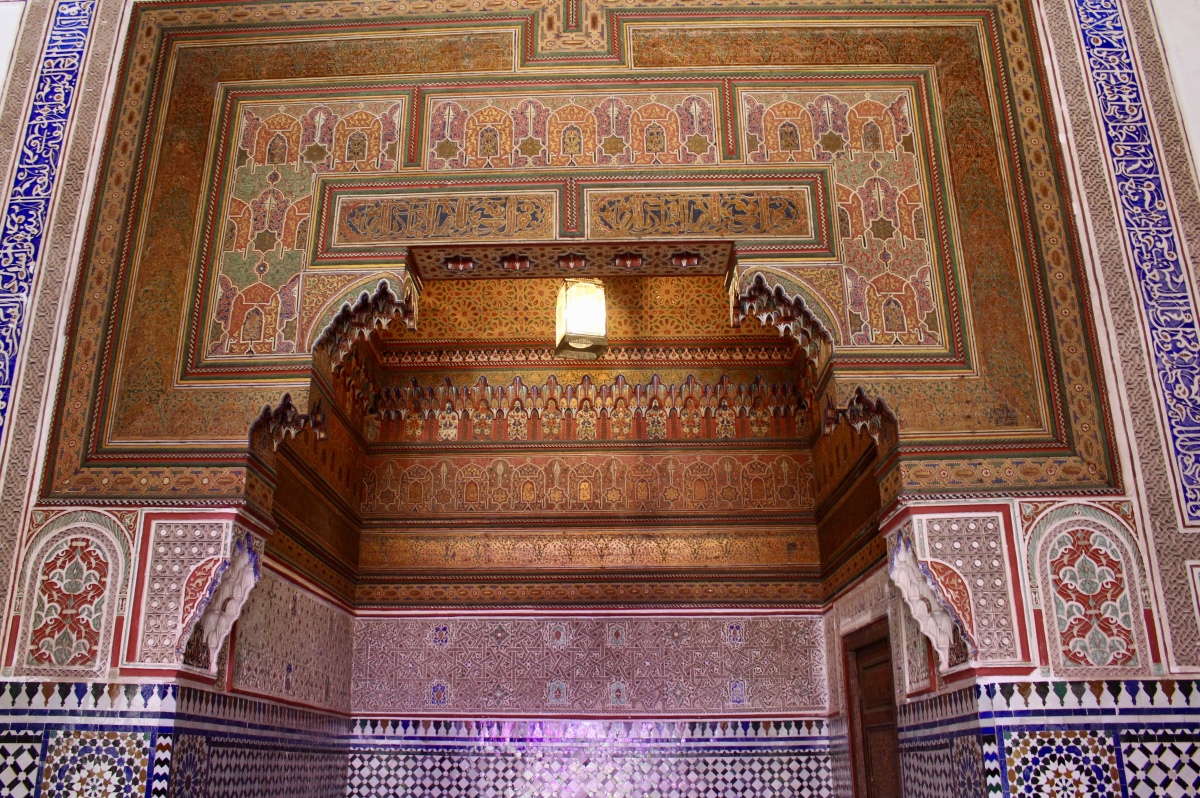 Near the famous square Jemaa el-Fna is the largest mosque in Marrakech, Koutoubia Mosque; it is ornamented with curved windows, a band of ceramic inlay, pointed crenelated parapets, and decorative arches.  The minaret tower is 77 meters, or 253 feet, and includes a spire and orbs.  It was completed under the reign of the Berber Almohad Caliph Yaqub al-Mansur (1184-1199). 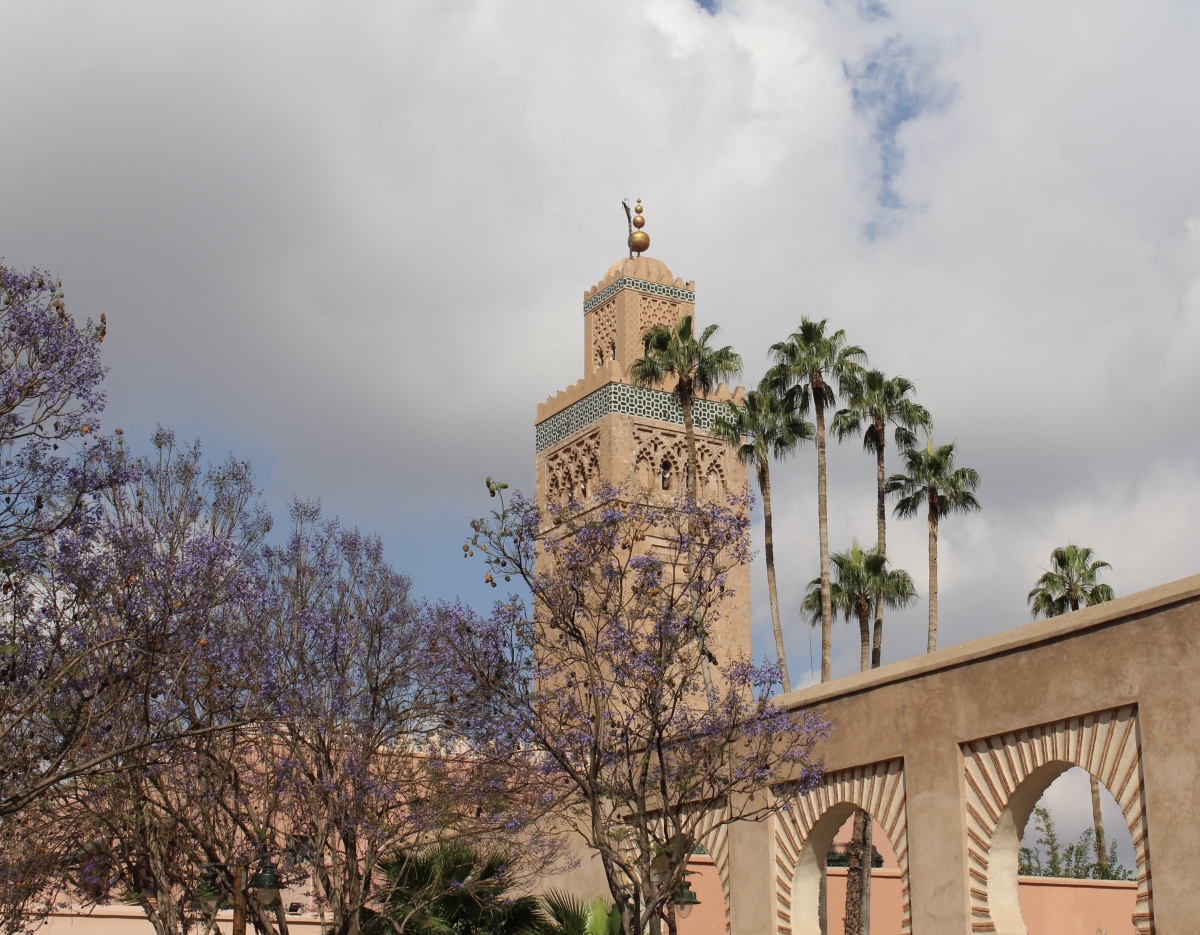 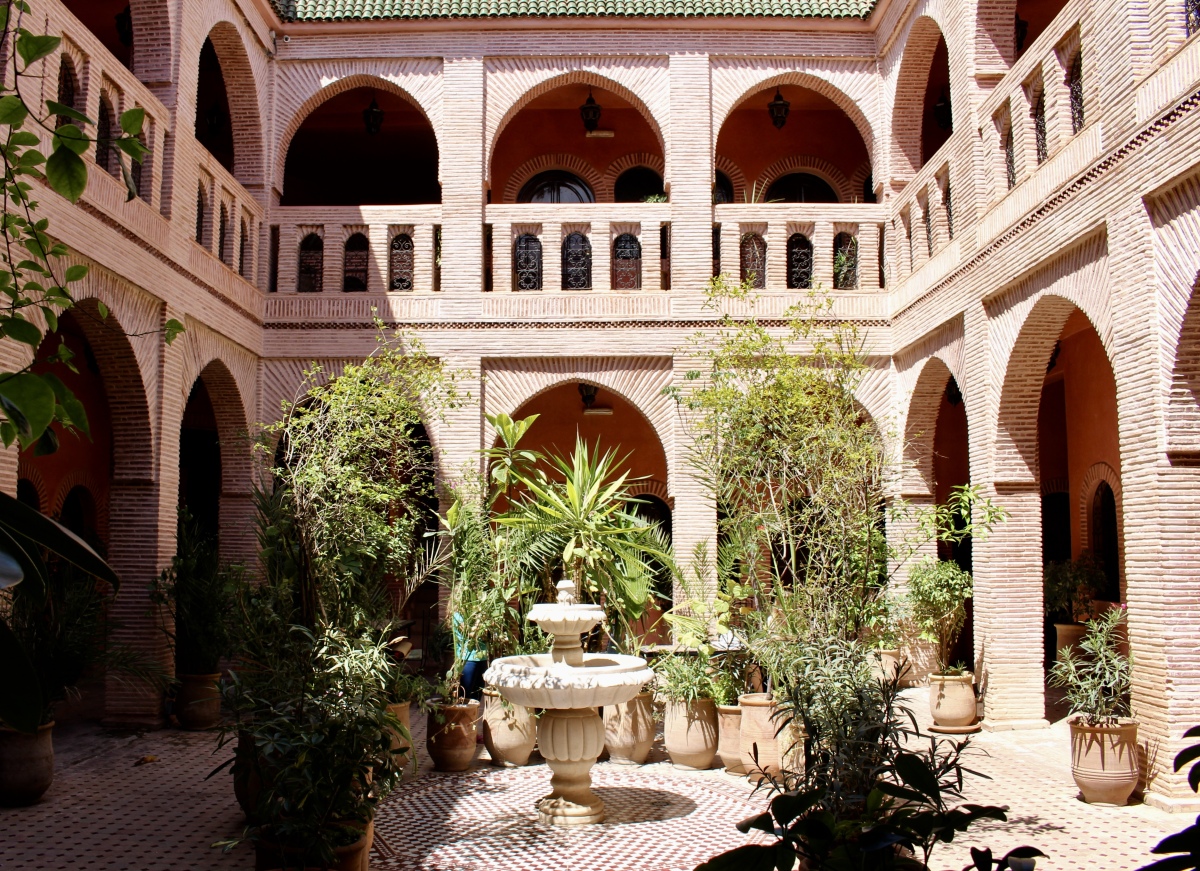 interior courtyard at a riad in Marrakech

Since I was on an economy-style G Adventures Tour, our accommodations sadly didn’t include any riads.  I was disappointed in this regard.

In my case, my intention was to look for thematic possibilities during my trip to Morocco. As Morocco has very distinctive architecture and interiors, I tried to capture the essence of architectural and interior design in photos.

I challenge you to post no more than 20-25 photos (I have more here!) and to write less than 1,500 words about any travel-related photography intention you set for yourself. Include the link in the comments below by Wednesday, December 18 at 1:00 p.m. EST.  When I write my post in response to this challenge on Thursday, December 19, I’ll include your links in that post.

This will be an ongoing invitation, every first, second, and third (& 5th, if there is one) Thursday of each month. Feel free to jump in at any time. 🙂