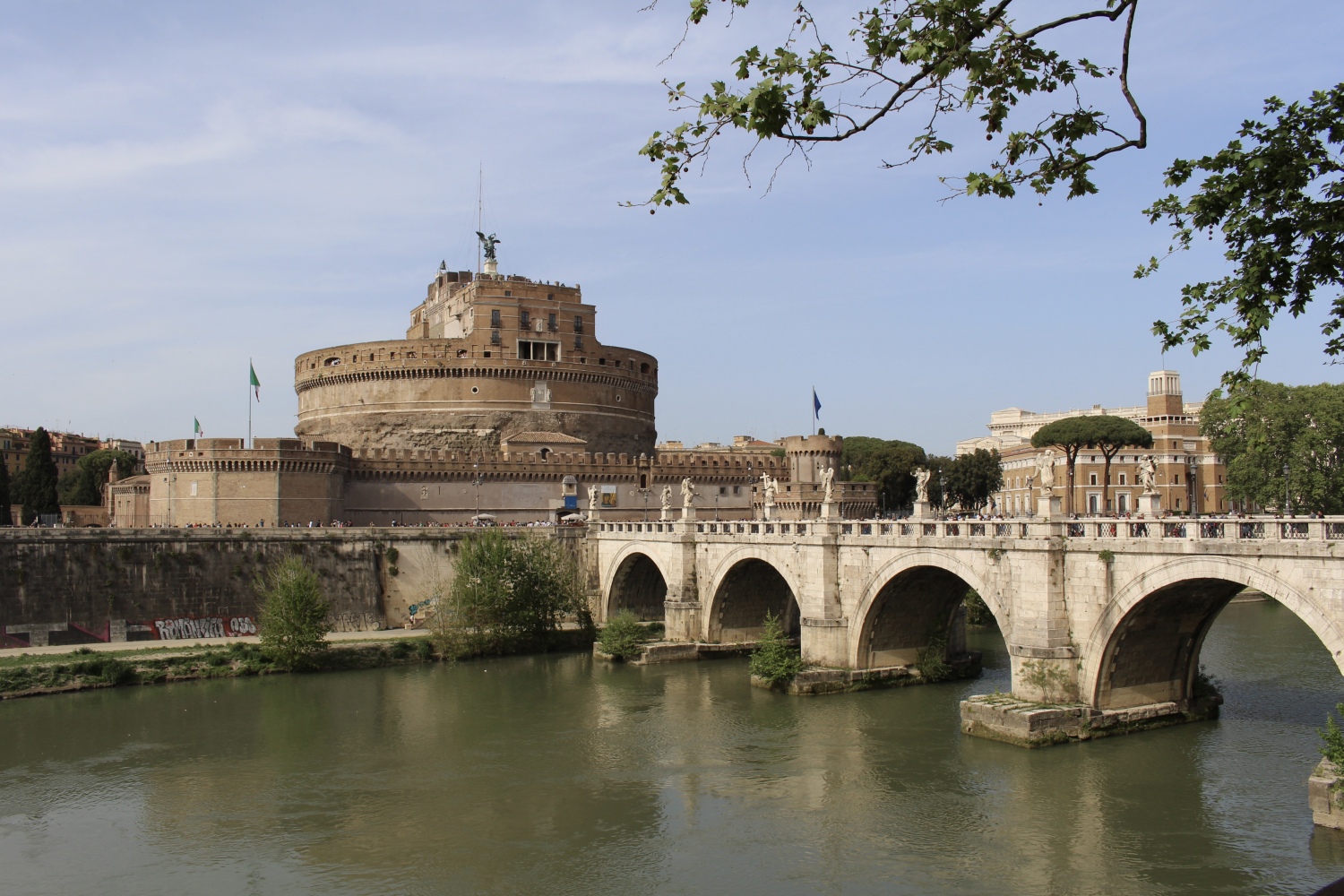 A pale tincture spread through my bedroom window; the promising springtime sun was rising over Rome, above the pastel apartments.  I had set my alarm for 6:45, but I kept hitting the snooze button because I was lost in a dream of something I couldn’t quite grasp. I finally rousted myself from bed around 8:30, threw on my clothes and went down to the basement of the Beehive for a breakfast of cappuccino, a cheese omelet, toast, jam and some vegetables, courtesy of Daniele.

I took my sweet time getting ready and finally left the hostel after 10:30.  Straightaway, I headed to the Roma Sightseeing Bus, but I had to wait for three buses before I could fit on.  An Irish couple sitting in front of me said, “It’s not really hop-on and hop-off, is it, if you have to wait in line forever to get on, and if you have to wait for three buses before there is a seat!”  I heartily agreed.  A maintenance guy was running around repairing things on the bus and people were getting testy. This was the first place I’d been where the hop-on hop-off concept didn’t work.

As we sat waiting on the bus, I could see The Basilica of St. Mary of the Angels and the Martyrs, dedicated to Christian martyrs, known and unknown.  It was built inside the ruined frigidarium of the Roman Baths of Diocletian in the Piazza della Repubblica. These public baths were built by Emperor Diocletian around A.D. 300 and sprawled over 30 acres; in these, up to 3,000 Romans could bathe at once. They functioned until A.D. 537, when barbarians attacked and plunged Rome into the Middle Ages.

Built in the 16th century following an original design by Michelangelo Buonarroti, other architects and artists added to the church over the following centuries. During the Kingdom of Italy, the church was used for religious state functions. 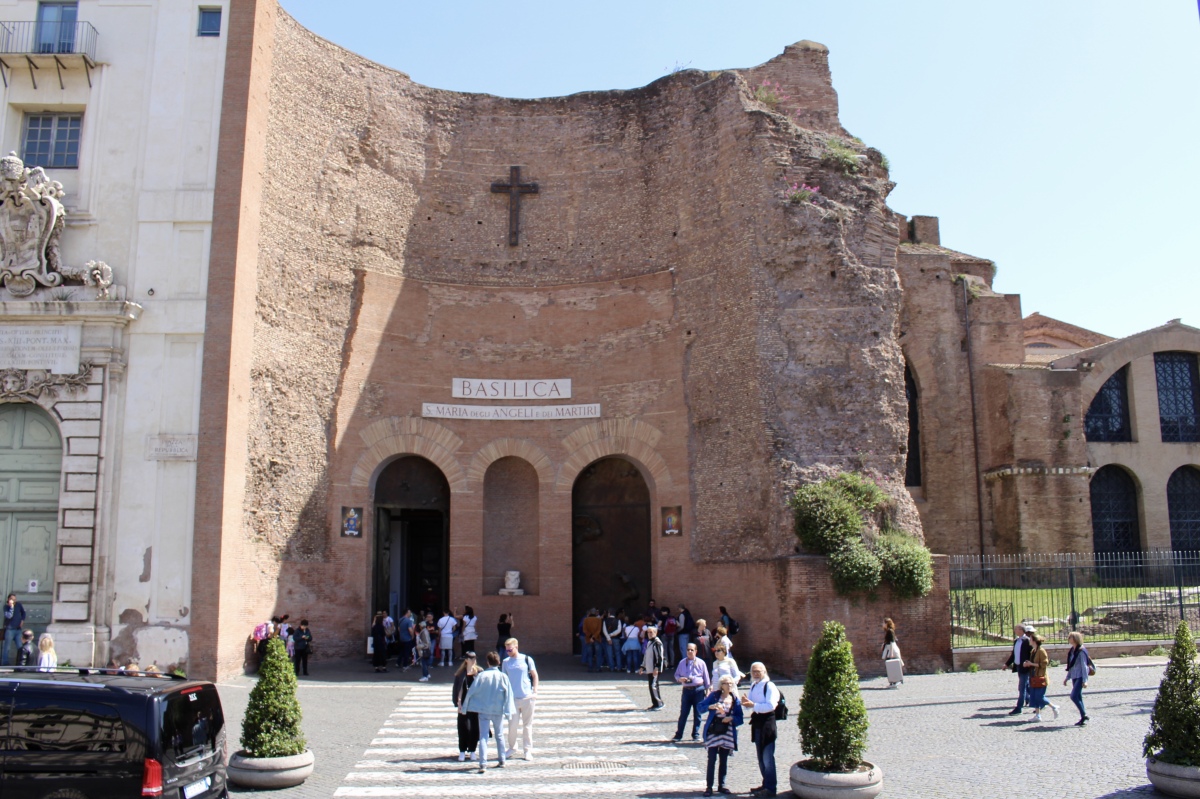 The bus took us past the Colosseum and around Circo Massimo, the giant arena from where 300,000 spectators once watched chariot races while the Emperor looked on.  Lying in a natural hollow between Palatine Hill and Aventine hill, it is Ancient Rome’s oldest and largest racetrack. 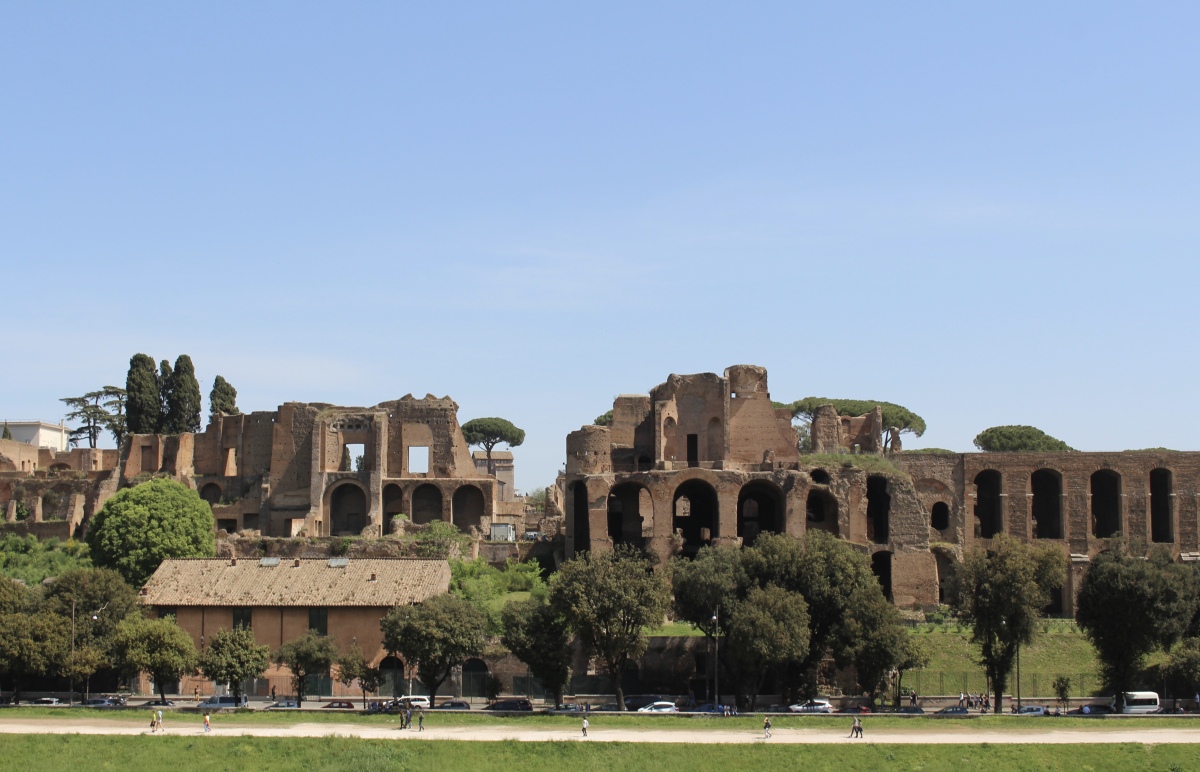 We continued riding past the impressive Il Vittoriano in Piazza Venezia. Nicknamed “The Wedding Cake” for its gleaming white marble and tiered levels, this large altar was built between 1885 – 1925 to honor Victor Emmanuel, the first king of a unified Italy. 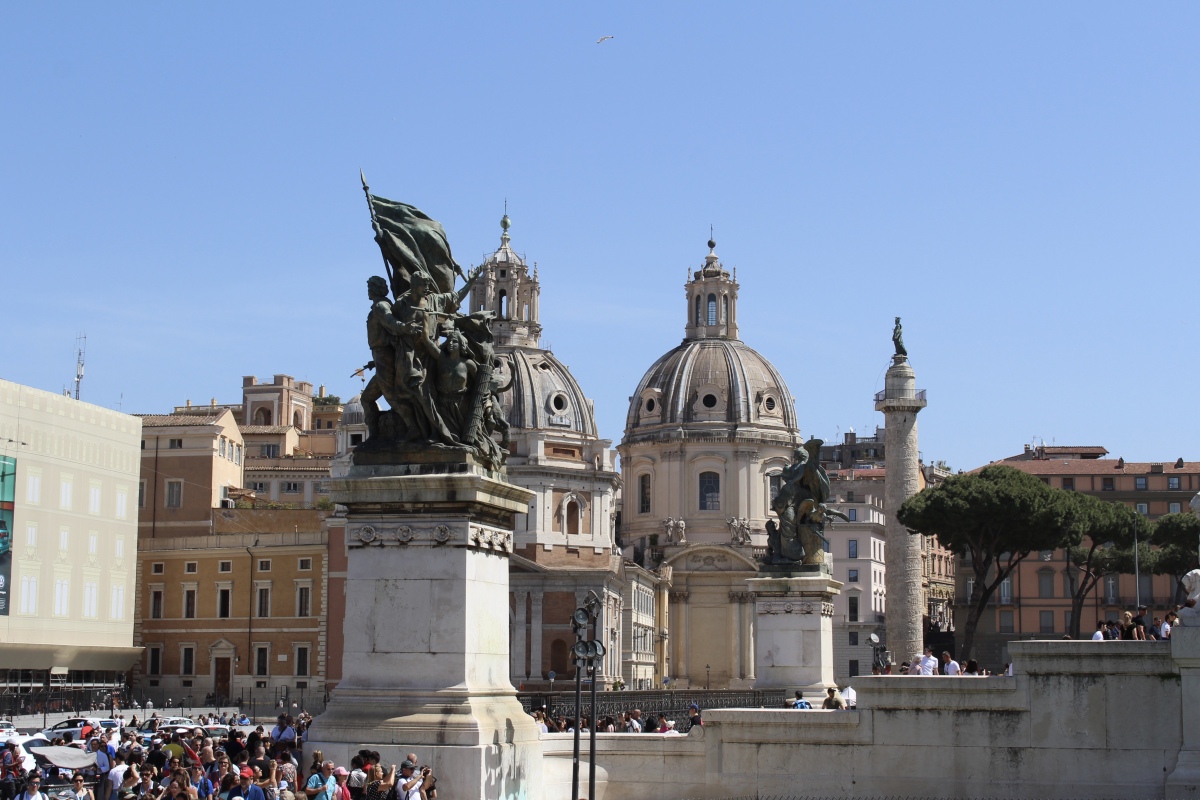 stop 6 on the hop-on hop-off bus 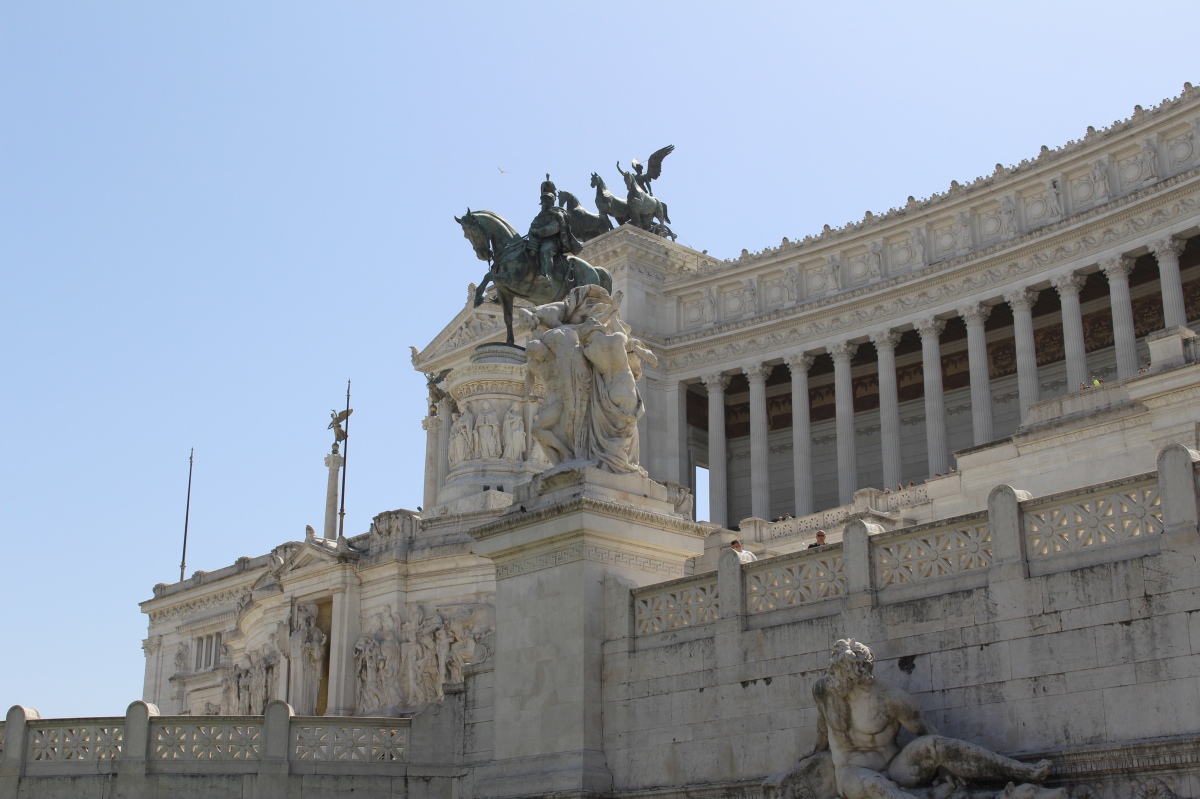 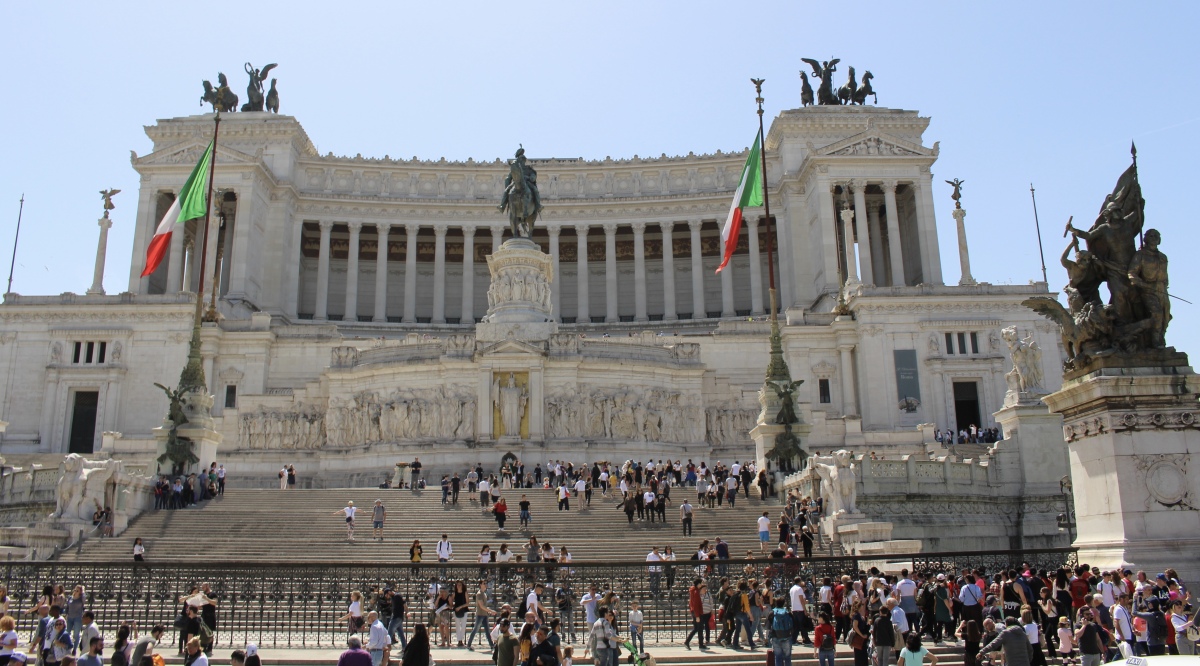 I finally got off the bus at Stop 6 near the Vatican at 11:30.  I walked around looking for a cash machine, got cash, then tried to find a restaurant.  One man at an empty restaurant pulled a small table a few inches away from another couple and beckoned for me to sit there.  I motioned that the whole restaurant was empty, so I wouldn’t sit there.  He said those were all tables for four, so I walked out.

The restaurant I finally settled on, Opera Restaurant, had an outdoor table right under the menu, so passersby kept stopping to read the menu over my table. The service was atrocious.  Waiters never asked what I wanted and were serving people who’d arrived after me.  I was so annoyed.  It took forever to get a drink of sparkling water.  I ordered just the water and gnocchi with tomato basil sauce, very bland. I really hate how some establishments have an attitude about solo diners, trying their best to either ignore them or make them feel unwelcome. 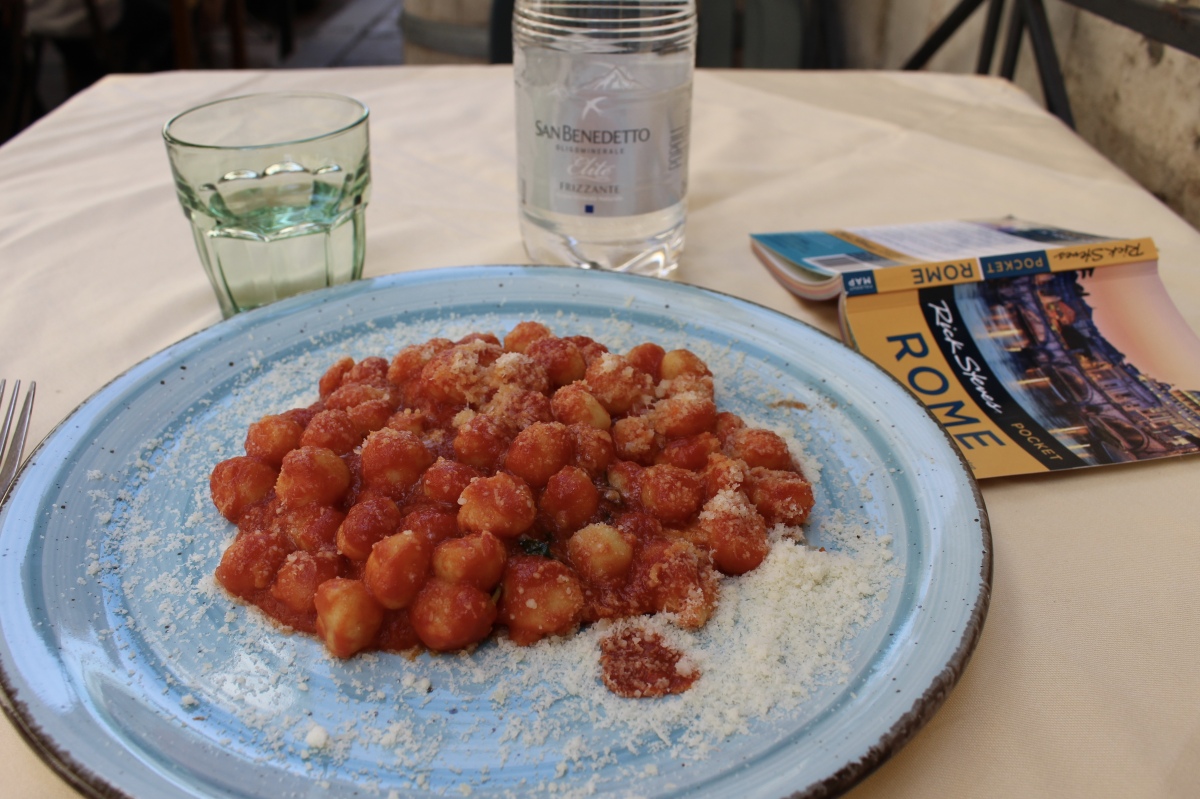 gnocchi at the Opera Restaurant

Fortified with lunch, I made my way across the Tiber River on Ponte St. Angelo. 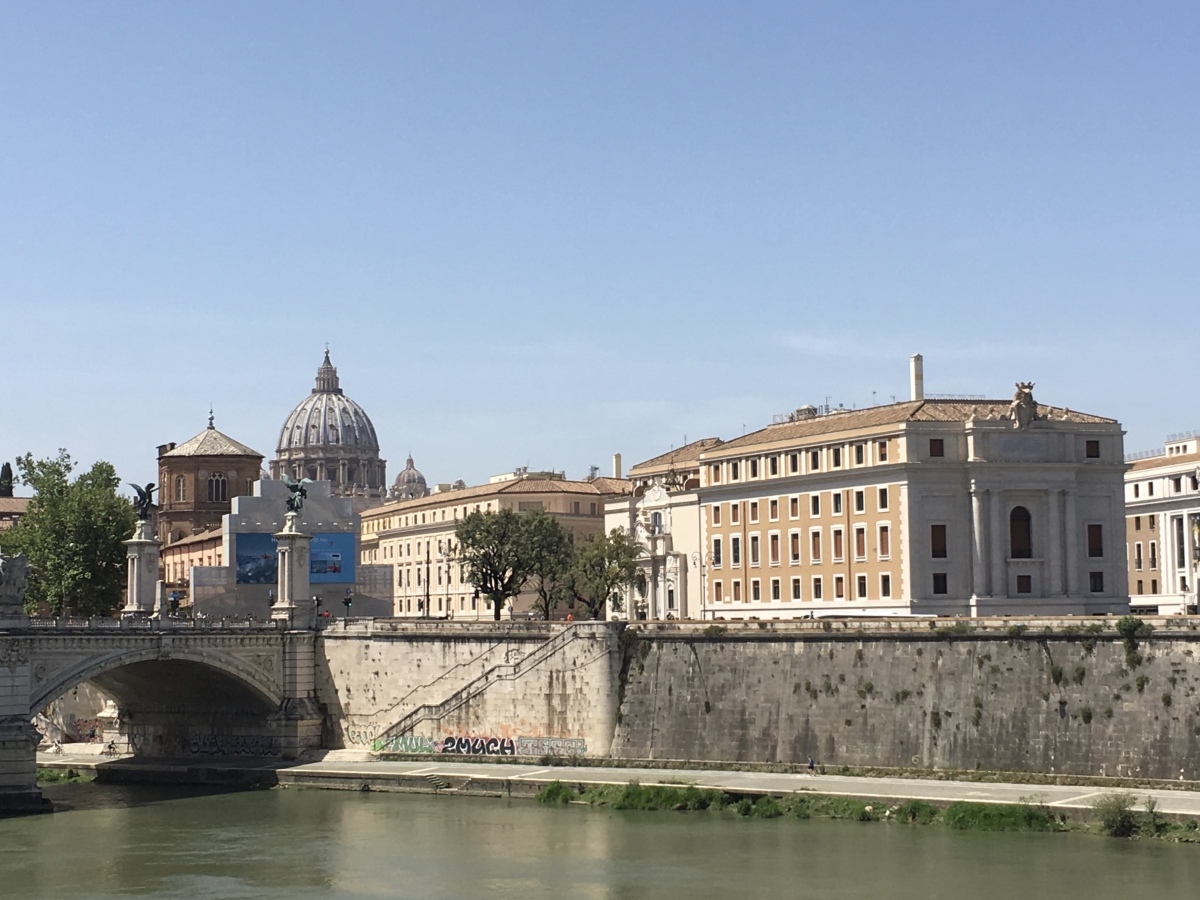 Castel Sant’Angelo is a cylindrical fortress that lies on the banks of the Tiber River. Emperor Hadrian commissioned the Castel, also known as Hadrian’s Mausoleum, as a resting place for himself and his family.  The structure was used as a papal fortress in the 6th century due to its proximity to Vatican City. At the time of its construction between 123 – 139 AD, it was the tallest building in Rome.  Today it houses the Museo Nazionale di Castel Sant’Angelo.

I took my skip-the-line ticket and went to the Roma Sightseeing Office and was given a voucher to enter the Vatican Museums between 1:30-2:15.

St. Peter’s Basilica, one of the holiest Catholic shrines in the world and an important pilgrimage site, was built above the burial site of Peter the Apostle.  The Basilica, completed in 1626, was designed by numerous artists, including Donato Bramante, Michelangelo, Carlo Maderno and Gian Lorenzo Bernini. Michelangelo’s famous dome was inspired by the Pantheon and the Duomo of Florence.

The Basilica overlooks St. Peter’s Square, the Vatican’s central square, laid out between 1656 and 1667. Designed by Gian Lorenzo Bernini, it resembles a giant keyhole with two semicircular colonnades to represent the welcoming arms of the church. Caligula brought the 25-meter obelisk in the center to Rome from Heliopolis in Egypt.  It was later used by Nero as a turning post for chariot races in his circus.

I was surprised to find I was able to enter the Vatican Museums easily, after a short stop at security.  First I wandered through the Pinacoteca, the papal picture gallery.  The collection is made up of around 520 paintings arranged in 18 rooms based on chronology and school, from the so-called Primitives (11th-13th centuries) to the 19th century.  The collection holds several masterpieces by major artists from the history of painting, including Giotto, Fra Angelico, Melazzo da Forli, Perugino, Leonardo, Cranach, Raffaella, and many more. 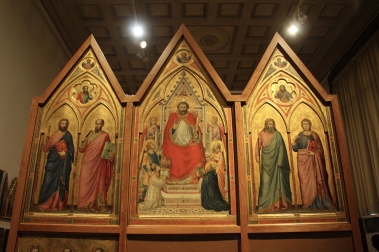 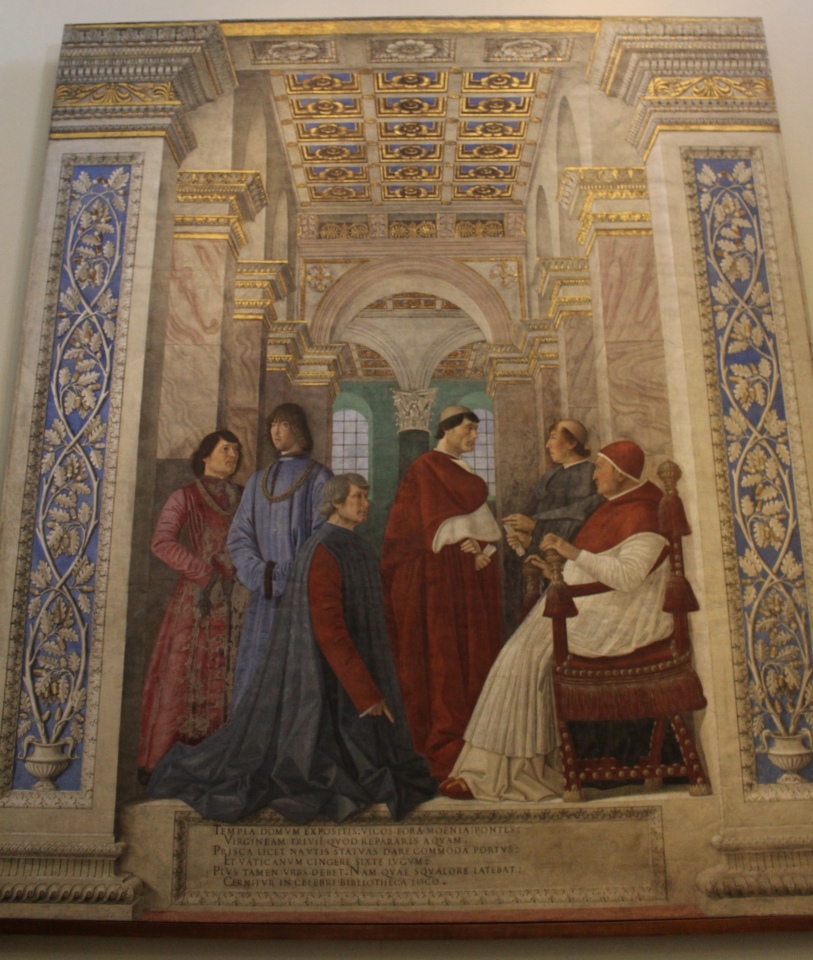 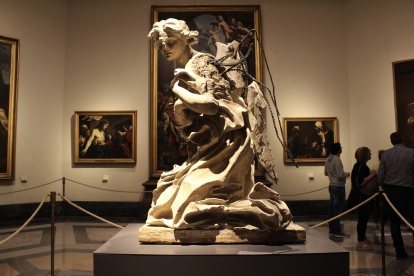 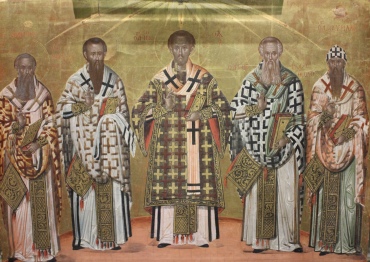 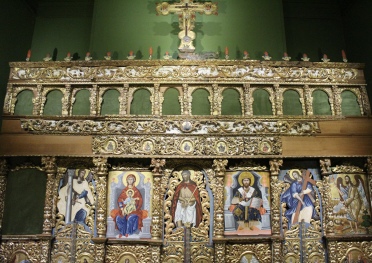 I stepped outside to see a faraway view of St. Peter’s Basilica.

view of St. Peter’s Basilica from within the Vatican Museums 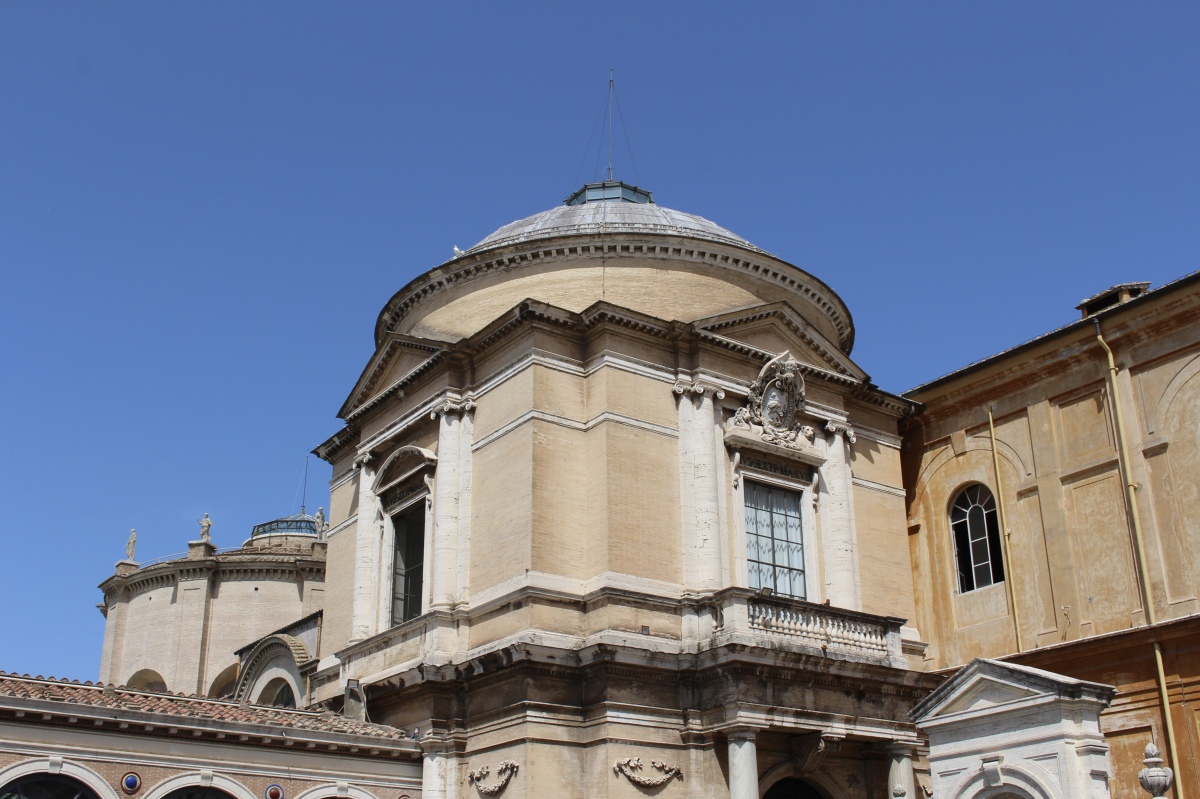 view from the Vatican Museums

Then I dove in with the crowds to the Egyptian mummies and tombs, statues and Egyptian gods as animals, as well as Sumerian writing, all from 3000-1000 B.C. 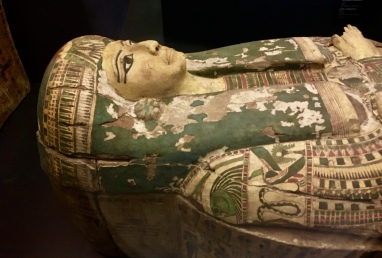 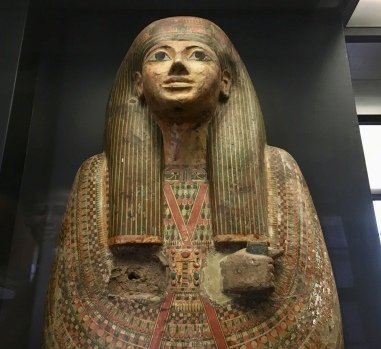 Leaving the Egyptians behind, I walked past a Roman sculpture and outside to a sprawling outdoor courtyard. 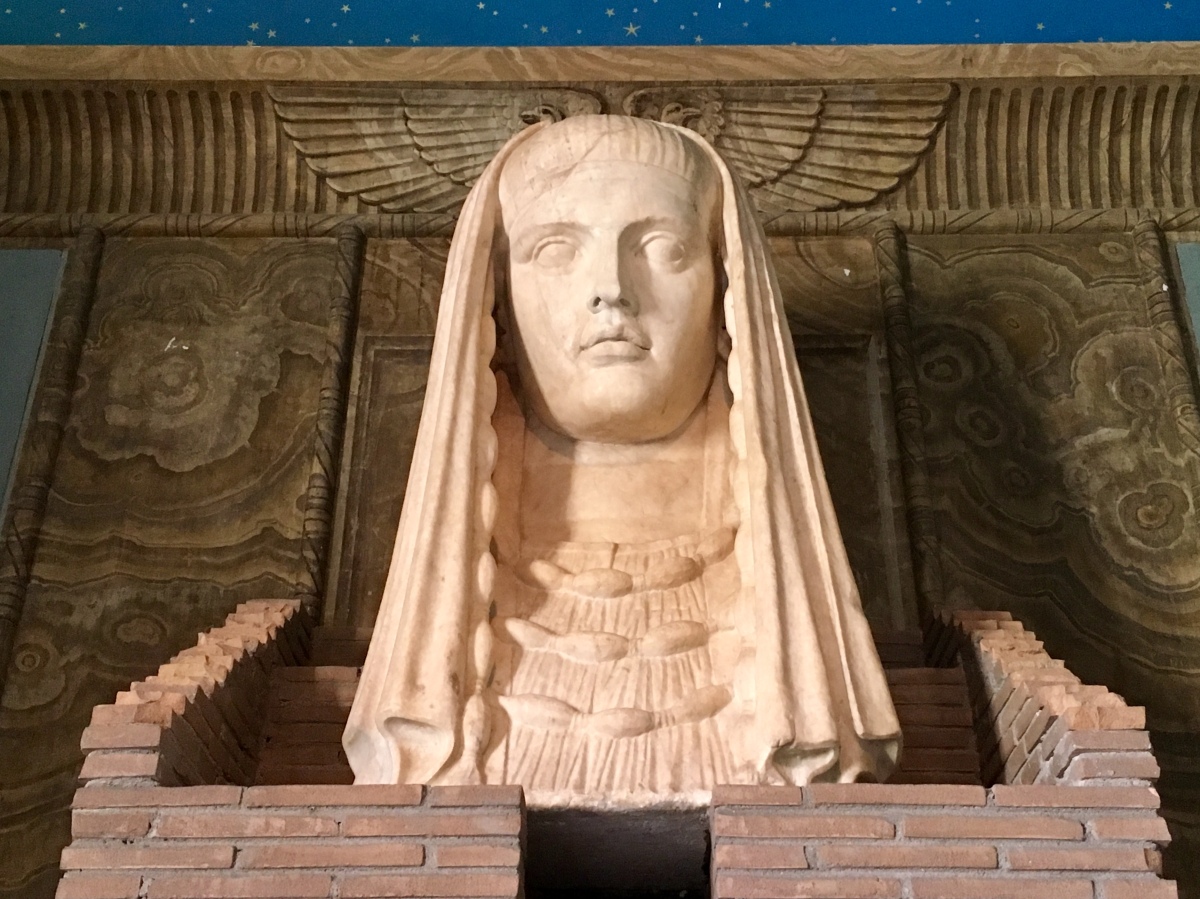 I continued on through the Greek and Roman Sculptures and more, which I will write about next week, continuing my long walk within the Vatican Museums. A presto!

After the Greek and Roman Sculptures, I was able to glimpse a view of the city. 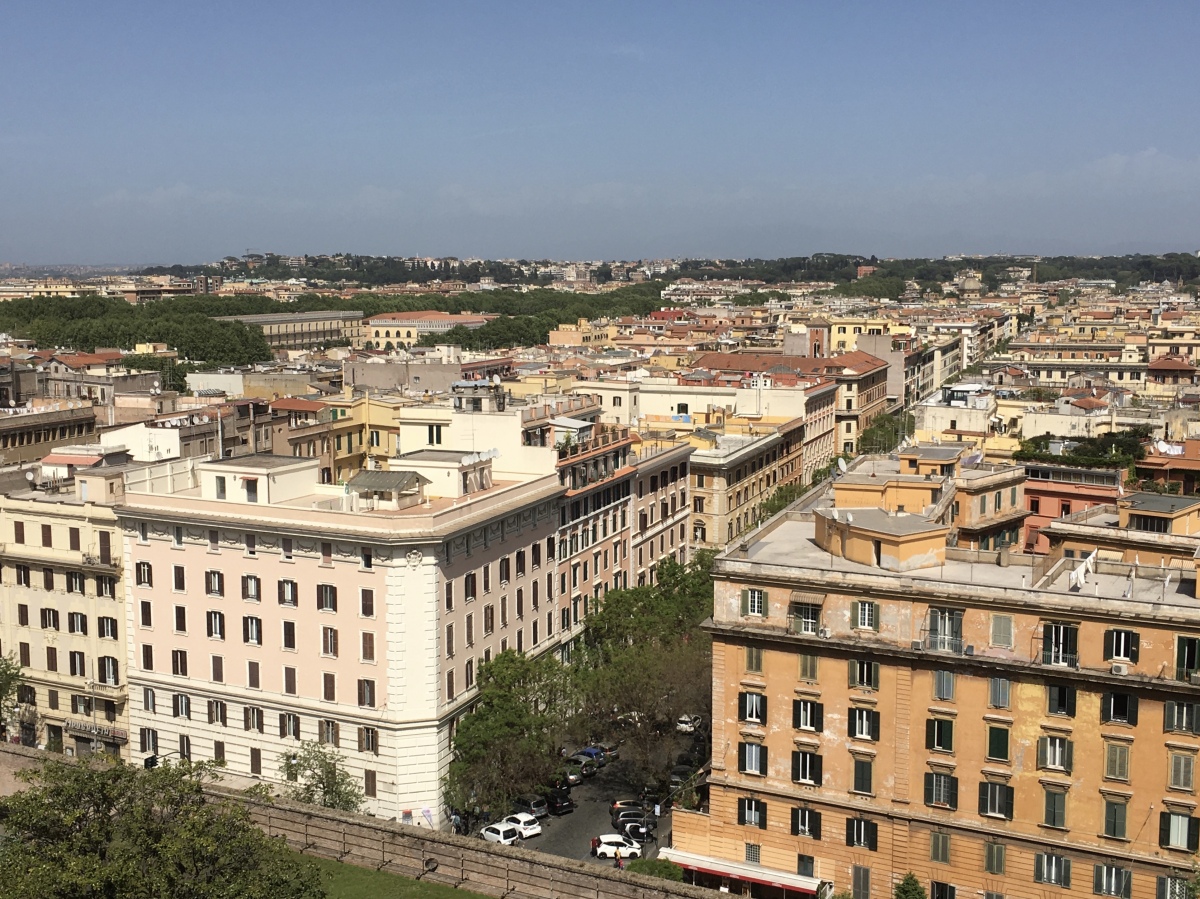 view of Rome from the Vatican Museums

view of Rome from the Vatican Museums

When I finished at the Vatican Museums, I walked the long avenue back to the bridge.  I didn’t feel like dealing with the Sightseeing Bus again, so I took a taxi to the hotel which cost me 18€ with tip. 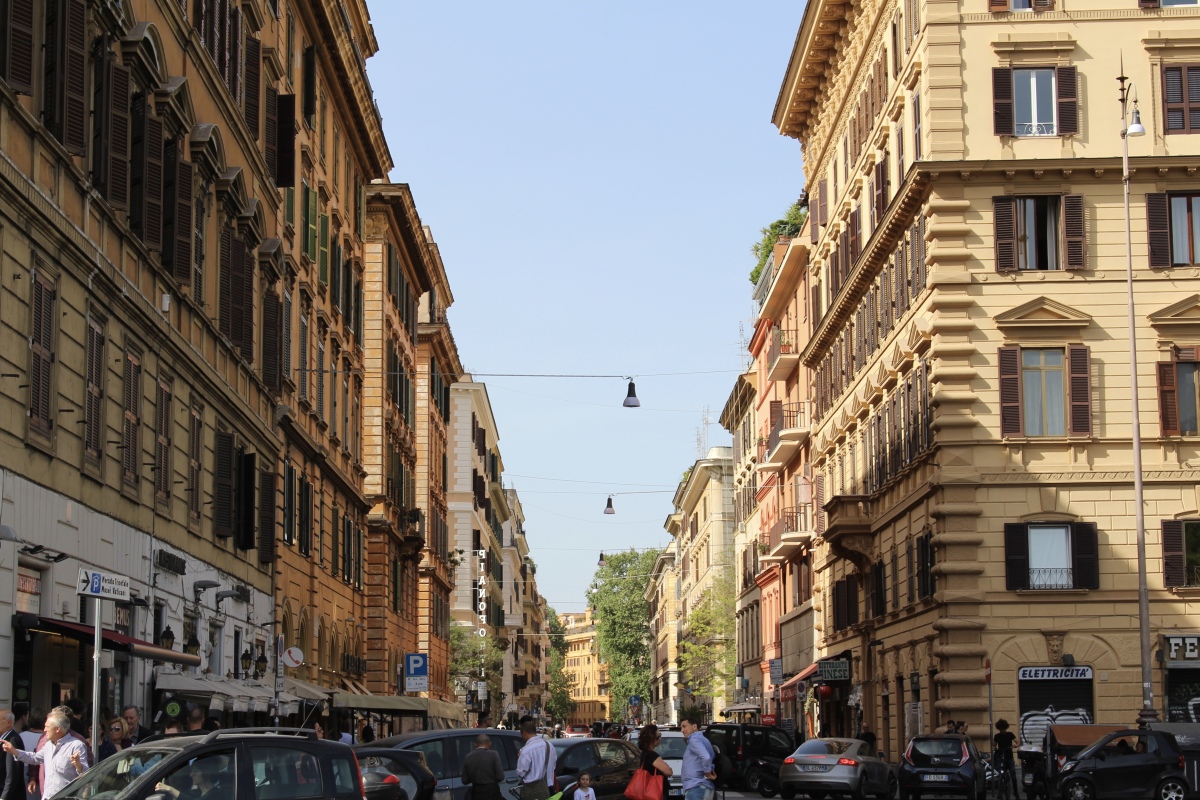 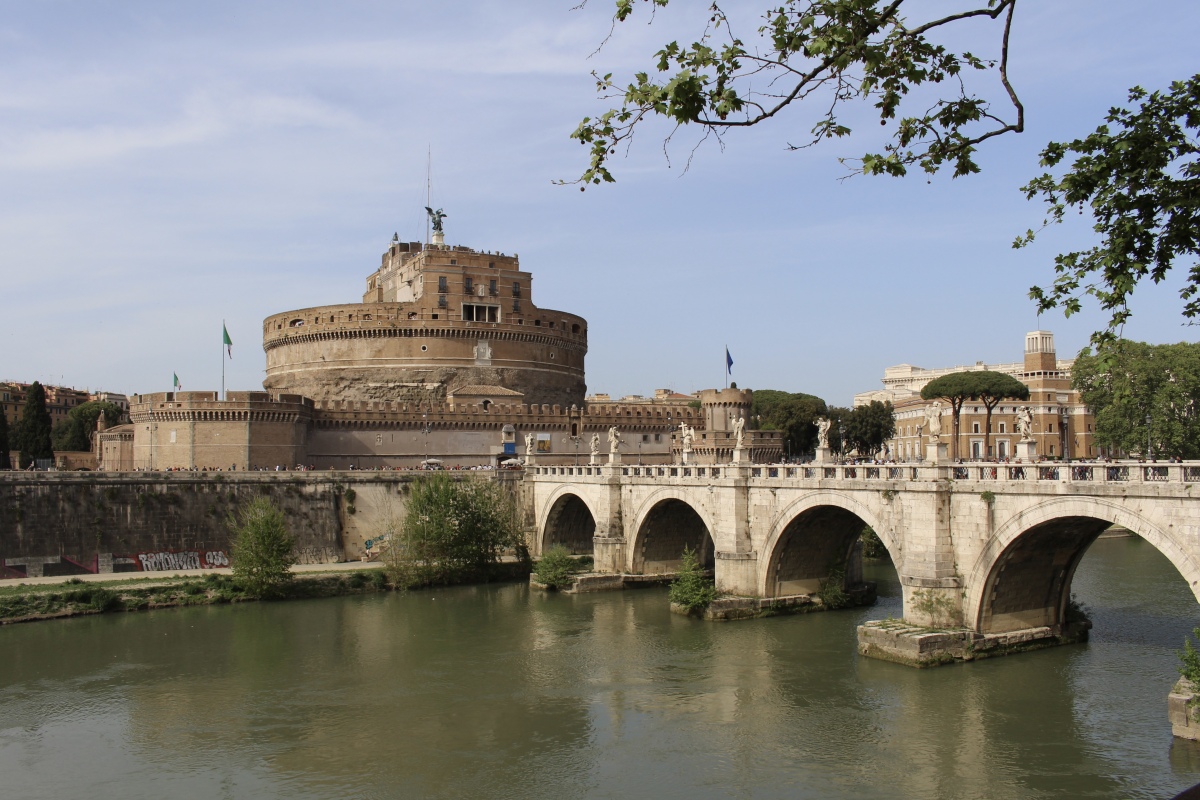 I ate a lovely dinner at Ristorante Regina right around the corner from the Beehive.  I had the Tourist Menu: Red wine, meatballs, roasted potatoes, and the highlight, tortellini in meat broth.  Its humble appearance didn’t do justice to its delectable taste!  For dessert, a bowl of fruit was served.

I chatted with a couple and their young son from California. The man told me that there were 7km of exhibits at the Vatican Museums, according to the guide they’d had; this didn’t surprise me at all. When I told them I’d be going to Florence, they said it was a small city with a lot of people packed into it.  The family was returning home the following day. 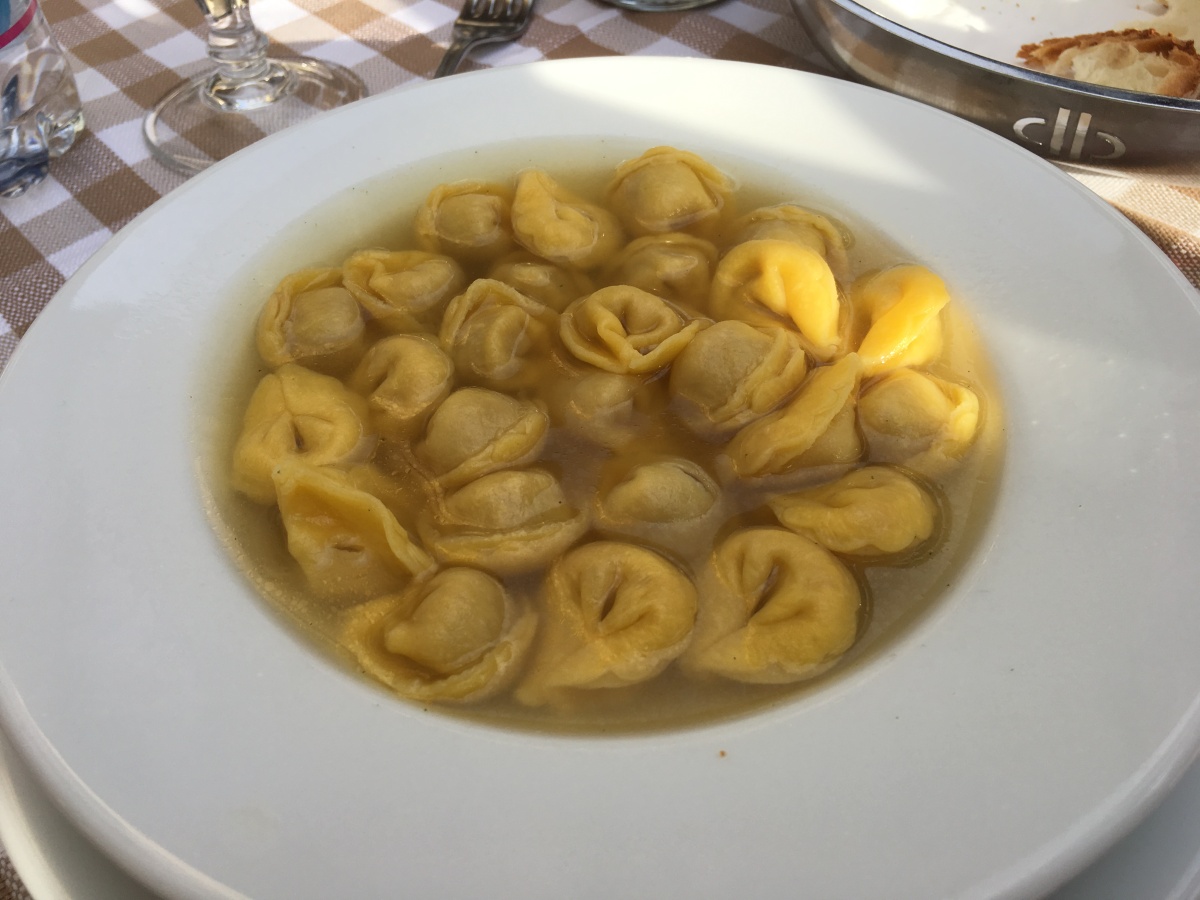 Rome near The Beehive

After dinner, during which I dropped a meatball onto my lap, staining my white shirt with tomato sauce, I returned to the Beehive and rinsed my shirt, then walked to Roma Termini Train Station.  I visited United Colors of Benetton, where I got a cute top and a scarf with golds and greens it.  Then I returned to my room to get cozy, ready to meet Mike at the airport early the next morning.

I would leave Rome after only skimming the surface in two days.  One would need a full week or more (maybe several) to see and experience Rome properly. If I ever went back again, I would go during the coldest and most miserable time of year, when the crowds might be thinned out. I certainly would avoid Easter week, when I spent most of my time fighting my way through hordes of people. 🙂

On Sundays, I post about hikes or walks that I have taken in my travels; I may also post on other unrelated subjects. In this case, my intentions for my trip to Italy were determined before I left home. One was to use a different Italian word each day.  My word for today was “A presto,” or “See you soon.” The other intention was as follows: Pick up any book you have on your shelf.  Turn to page 79.  Pick the 4th sentence on the page and write that sentence at the top of each day’s journal entry. Then brainstorm any ideas that come to your mind related to that sentence.  Write a travel essay using that sentence as your topic sentence.

The sentence I wrote in my travel journal was this: “A pale tincture spread into the study window; the pinched little winter sun was rising over the earth, above the neighbors’ buildings.” This is from a short story called “Some Other, Better Otto” from the collection Twilight of the Superheroes: Stories by Deborah Eisenberg.  Again, I modified the sentence and used a version of it to describe my second morning in Rome.

I invite you all to settle in and read posts from our wandering community. I promise, you’ll be inspired!

Thanks to Sheetal for sharing her experience at the Vatican Museums. 🙂

Nature through the eyes of a paintbrush