It would be 3 1/2 hours to Volubilis on winding mountain roads through green fields and forests. I was surprised by all the green I was finding in Morocco.  We stopped for one look back at Chefchaouen before we left the blue town behind.

We went through a poor area in a mountainous region with ramshackle dirty houses and a river snaking through the valley amidst piles of rubble and laundry hanging on rooftops. Towns were badly in need of fresh paint.

We stopped for a restroom break at a place with a swimming pool and dining tables set formally with tablecloths clustered around the pool.

The landscape flattened and eucalyptus trees lined the road under chilly gray skies.  This was farmland with neat rows of crops – barley and chickpeas – and orange orchards; yellow flowers highlighted the fields. We passed a donkey pulling a cart, a flock of sheep and lambs, a shepherd wearing the djellaba. Cows grazed beside the road.  I felt like I’d taken a trip back in time to a previous century.  Orange groves and olive trees lined up neatly on the horizon. We stopped at a roadside stand for some oranges fresh off the trees.

a stop at the orange orchards 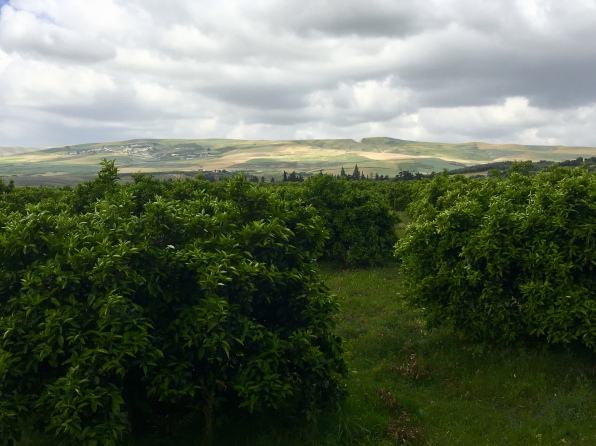 We arrived in Volubilis by noon.  The site is a large expanse of Roman ruins in the middle of a fertile plain about 33km north of Meknès. It is the best preserved archeological site in Morocco, declared a UNESCO World Heritage Site in 1997.  Excavation is slowly ongoing, with only half the site excavated. It has an amazing number of mosaics preserved in situ.

Evidence has been found, such as Neolithic pottery, indicating that this area was settled as long ago as 3000 BC due to its fertile valley. Later it was settled by Phoenicians and subsequently by Carthaginian traders in the 3rd century B.C.  One of the Roman Empire’s most remote outposts, it was annexed around 40 A.D. Up to 20,000 people lived here, planting wheat and deforesting massive swaths of land. The Romans abandoned it in 280.  It then prospered under local rule as an Amazigh capital, and its population of Berbers, Greeks, Jews and Syrians spoke Latin until the arrival of Islam. Moulay Idriss founded a sanctuary here in the 8th century before moving the capital to Fès.

Volubilis and its fertile plains 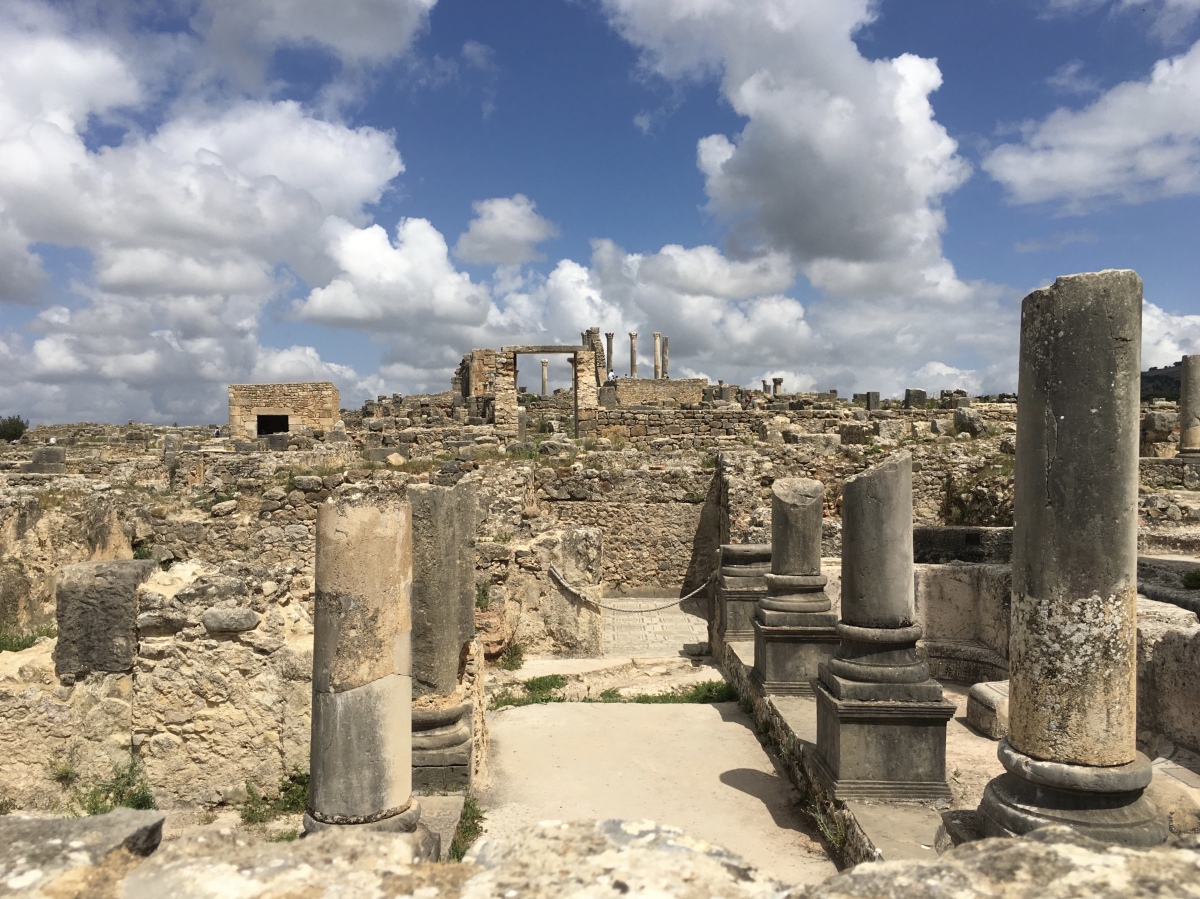 Volubilis was inhabited until the 18th century when its marble and precious stone was plundered for Moulay Ismail’s palaces in Meknès.  The buildings were finally destroyed in the Lisbon earthquake of 1755. 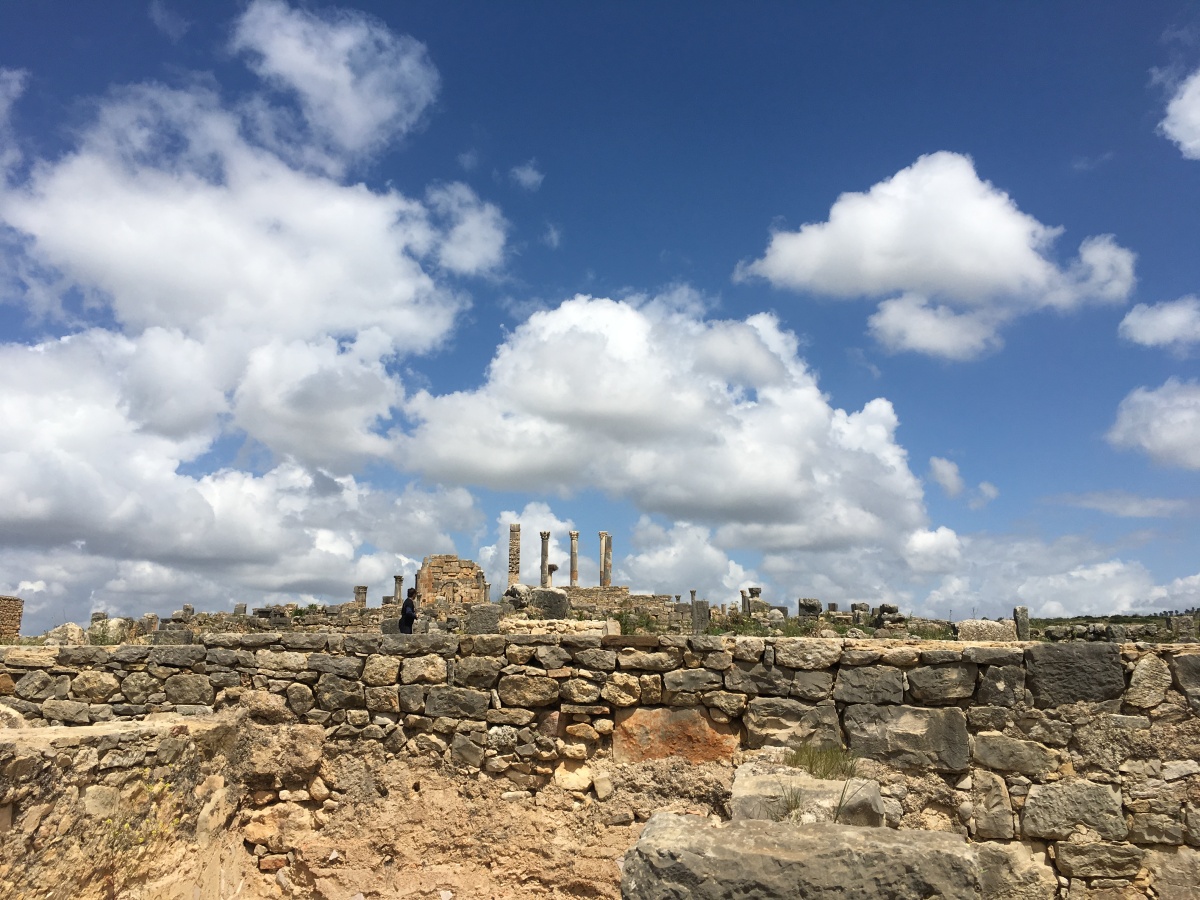 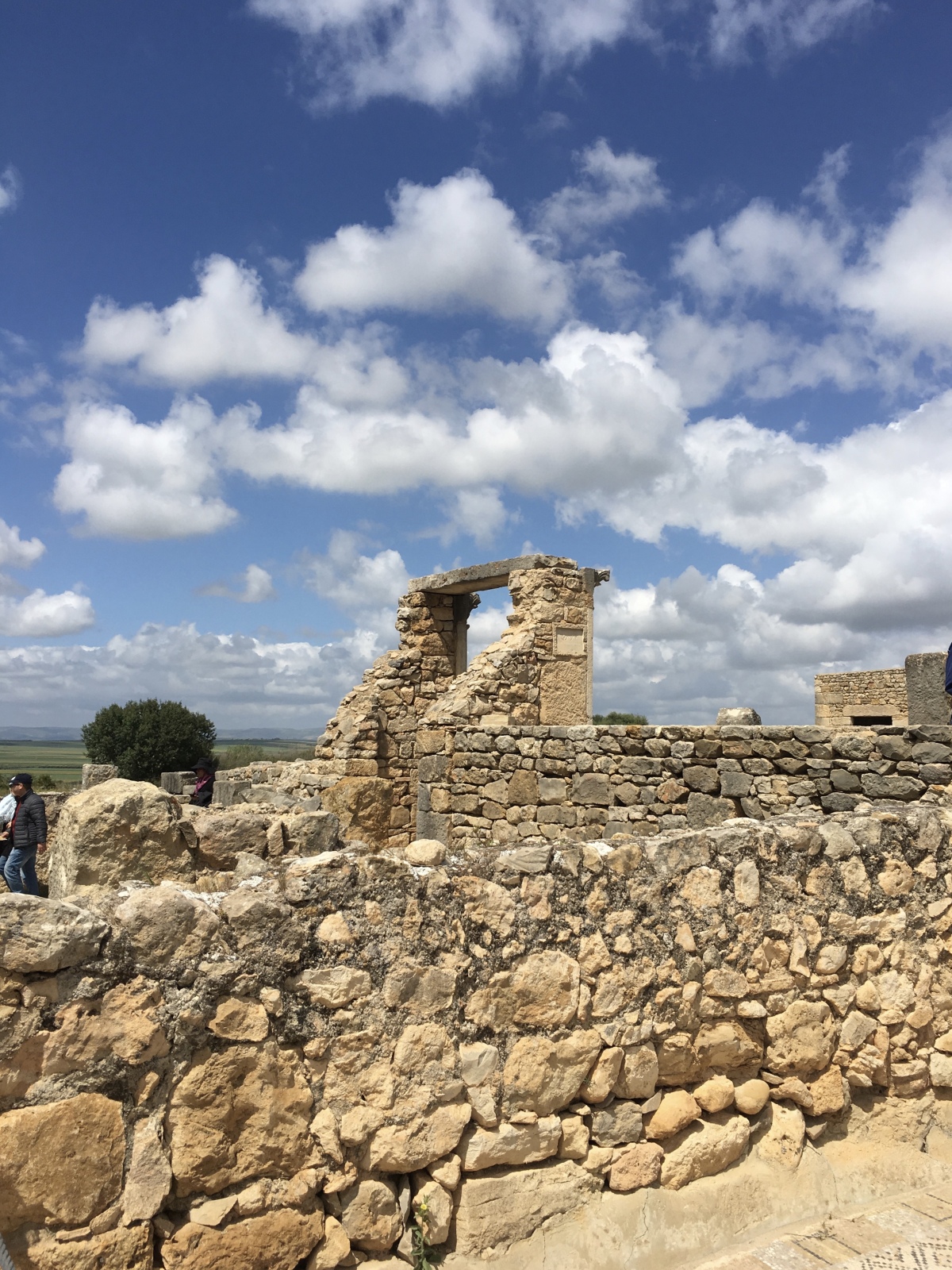 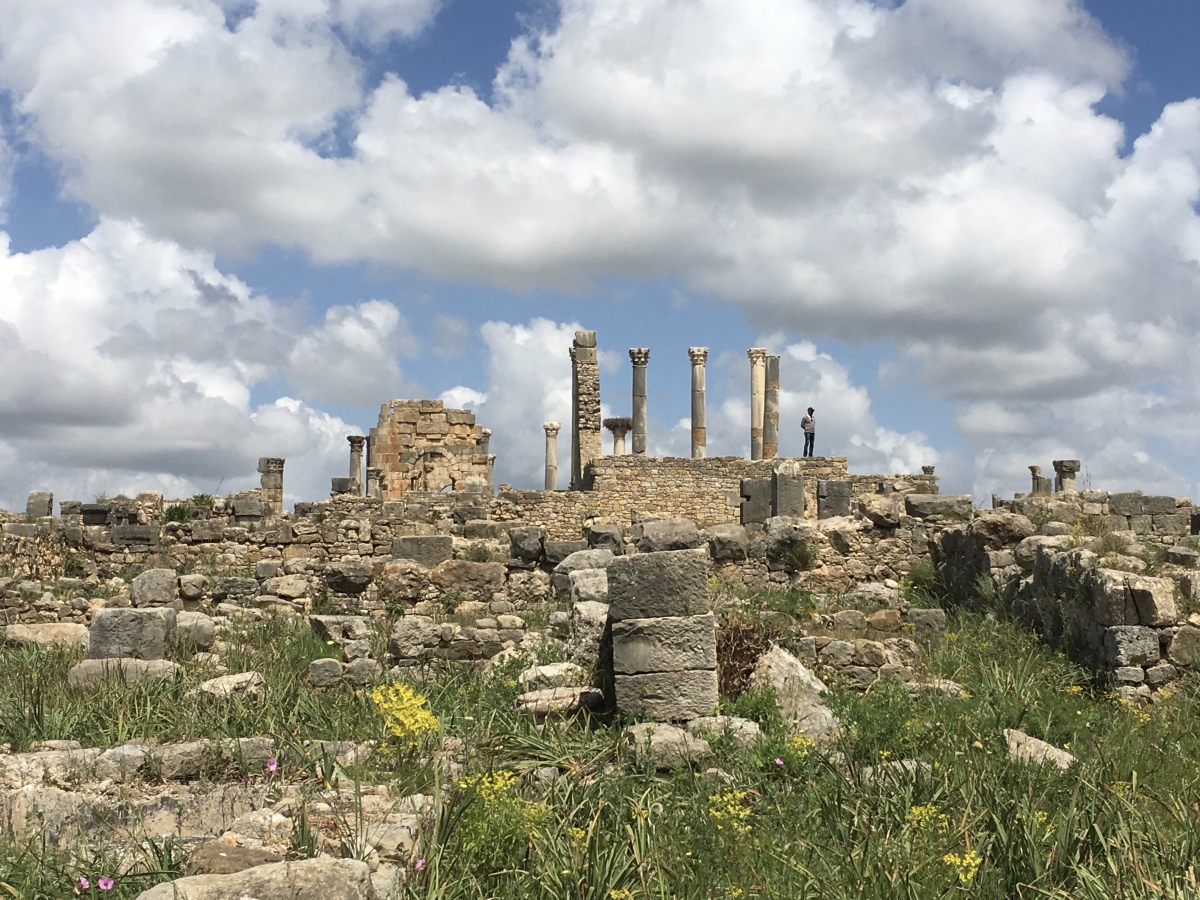 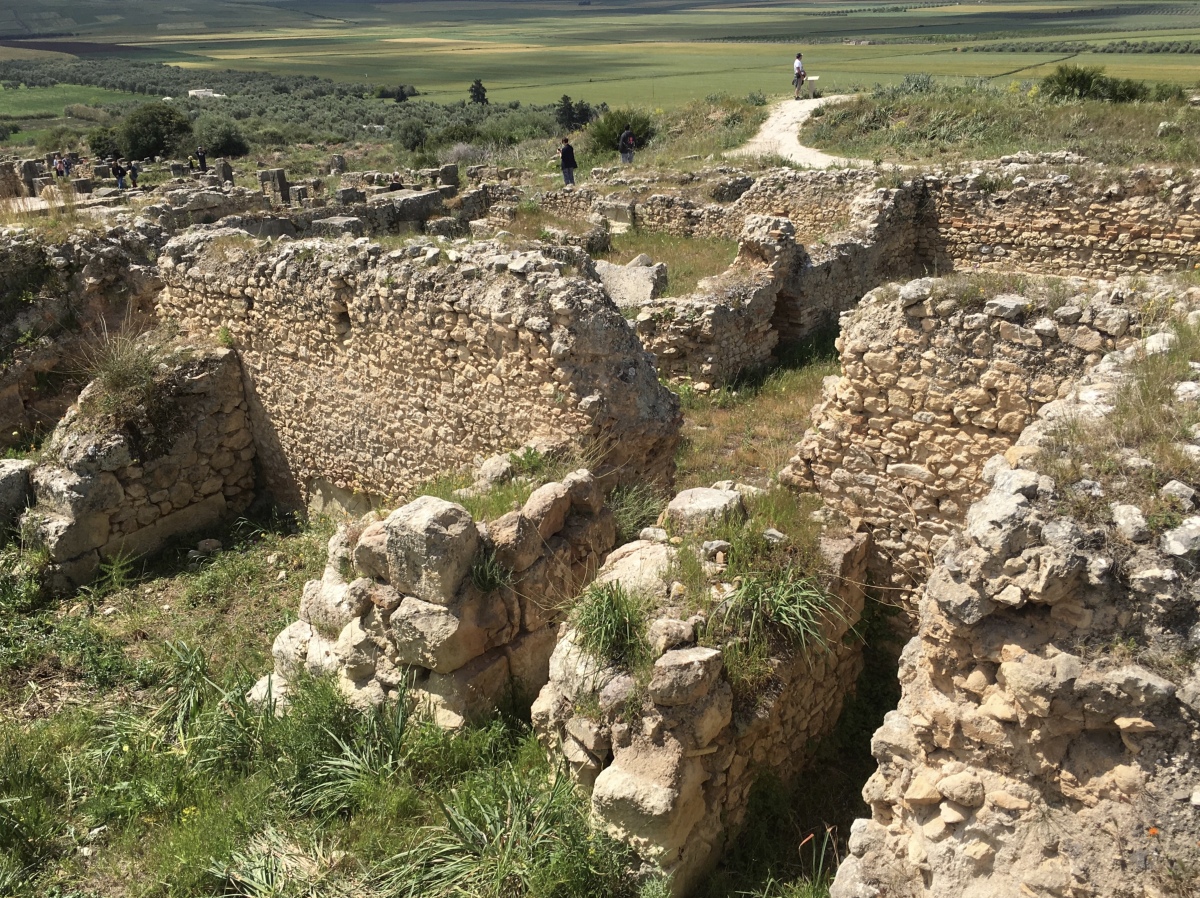 At Volubilis, olive groves and nearly 60 olive presses were found, indicating olive oil was the economic backbone of the settlement.  A female skeleton was found facing Mecca, indicating she was Muslim.

Galen’s Baths was a Roman hammam with underfloor heating and communal toilets. 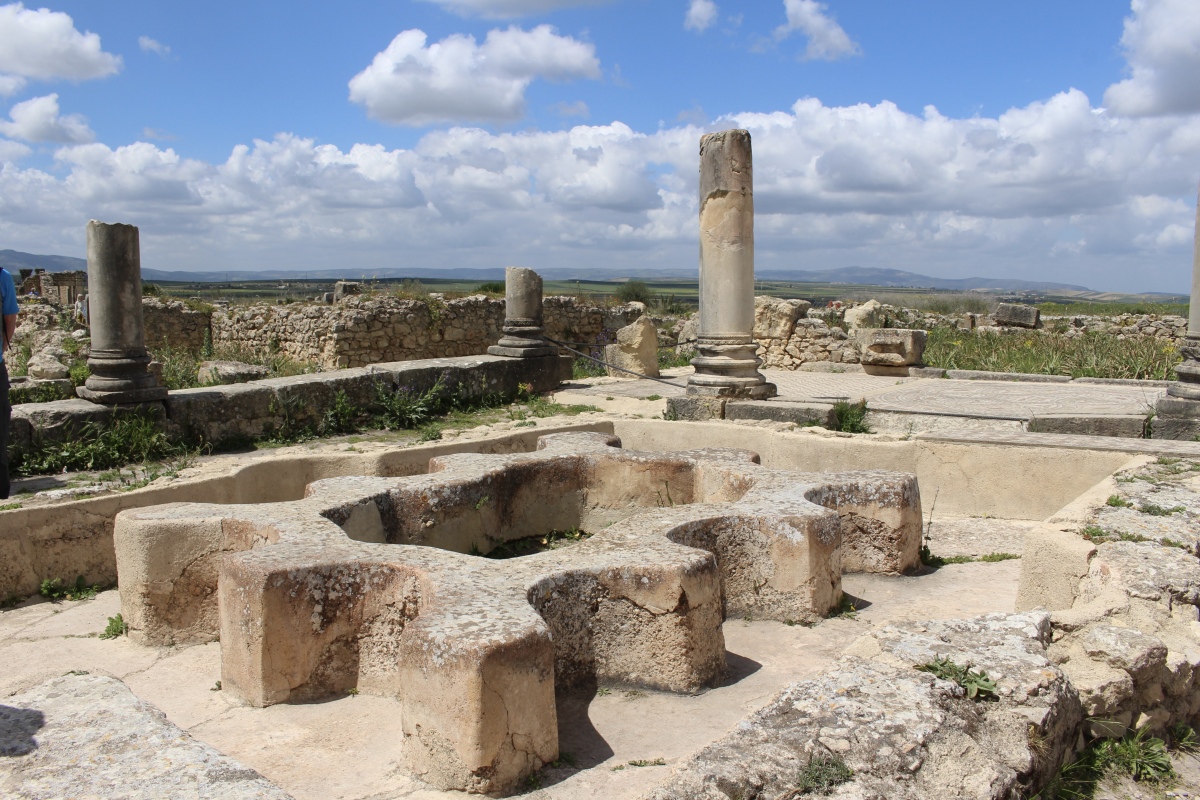 The Capitol from 218 was dedicated to the triad Jupiter, Juno and Minerva. 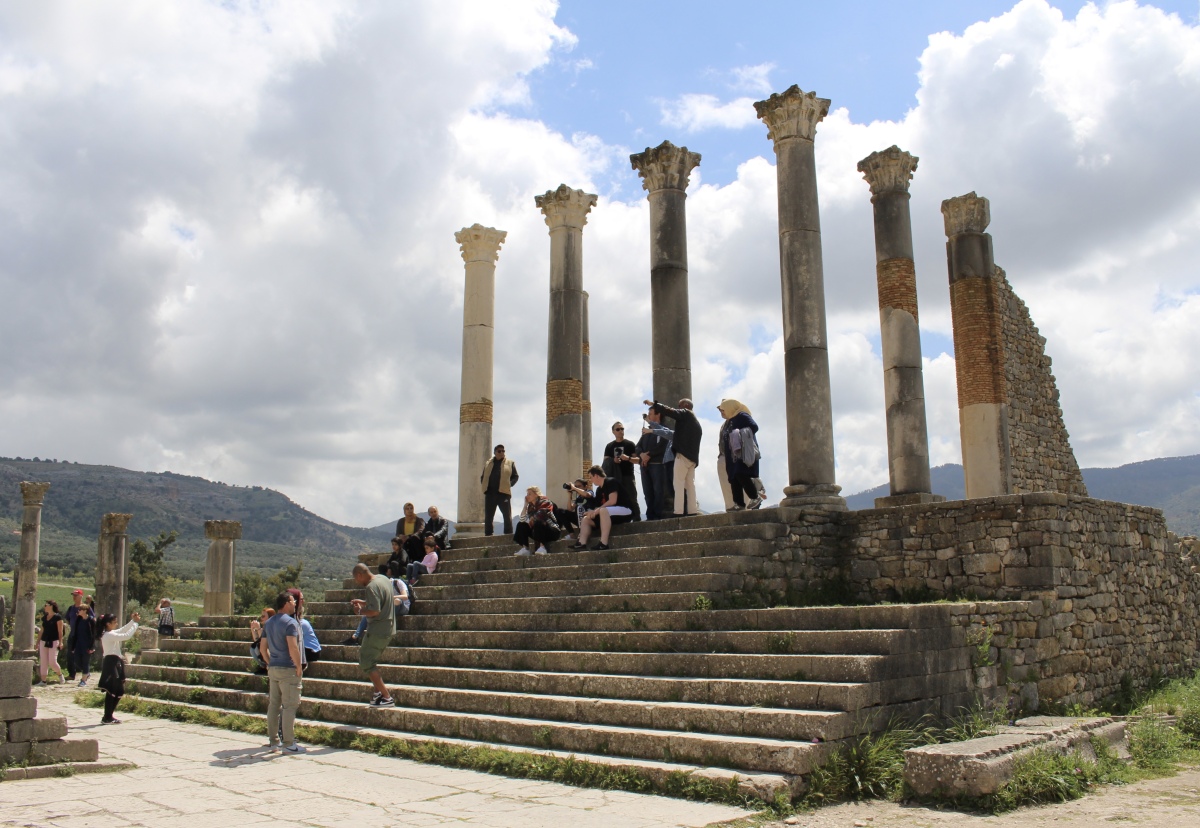 A Roman Basilica to the north had columns topped with storks’ nests. The original building was two stories tall. Local markets were held in the surrounding forum.

stork’s nest at the Roman Basilica 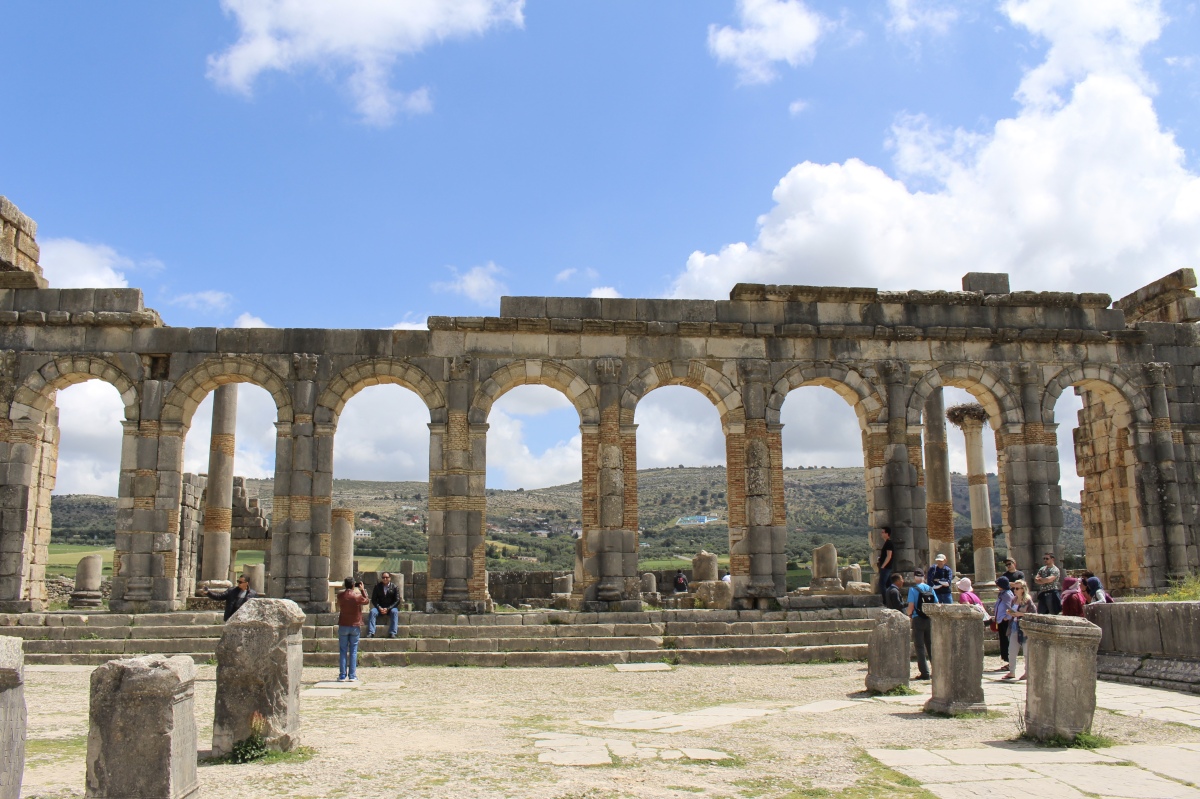 The marble triumphal arch, called the Arch of Caracalla, dated from 217 AD, was built to honor Emperor Caracalla and his powerful mother, Julia Domna. 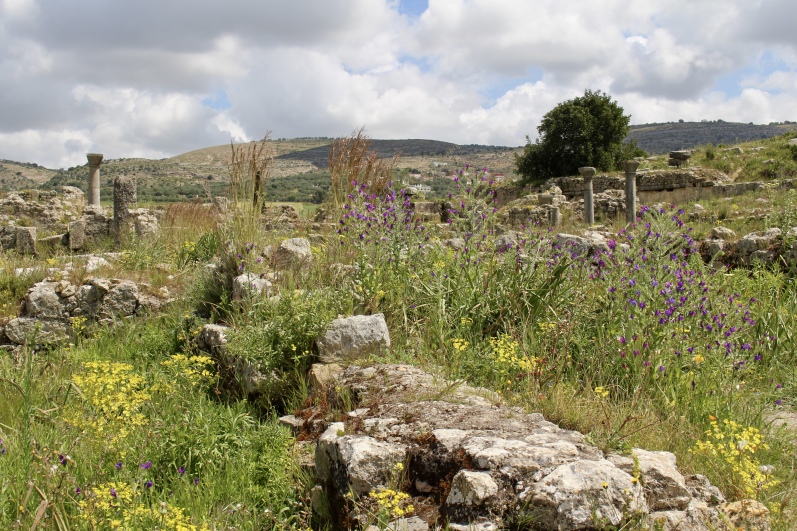 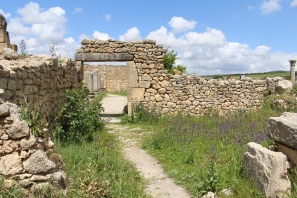 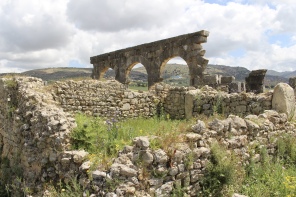 There are a number of houses with mosaics along the main thoroughfare and ceremonial road: Decumanus Maximus. 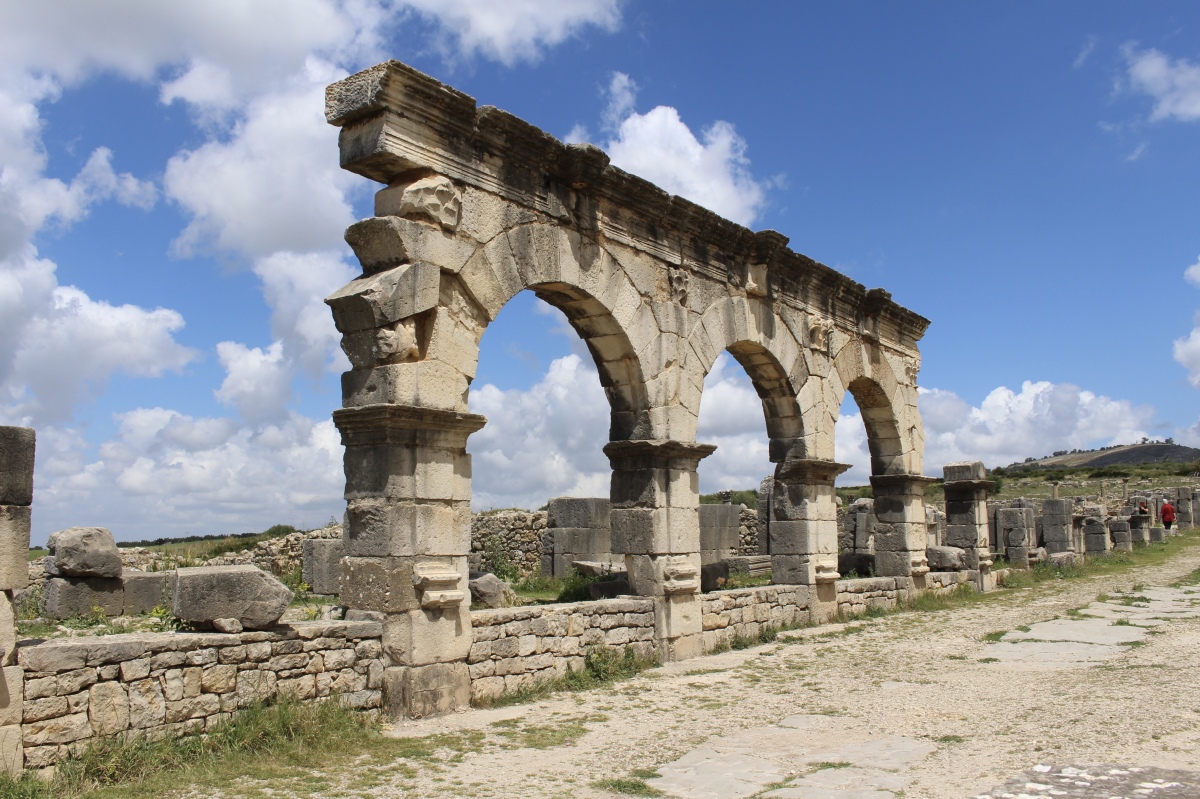 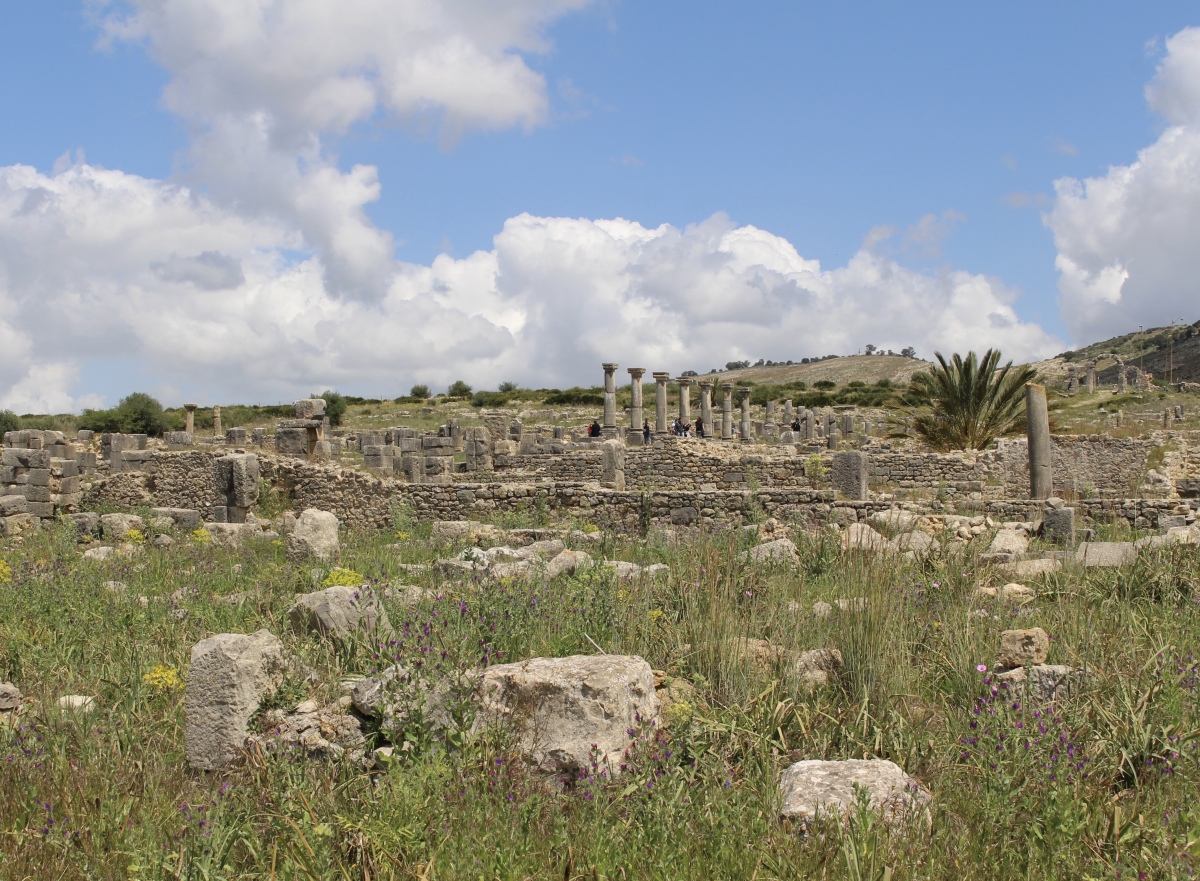 The House of the Acrobat showed an athlete getting a trophy for a race in which he dismounted and jumped back on as the horse raced along. 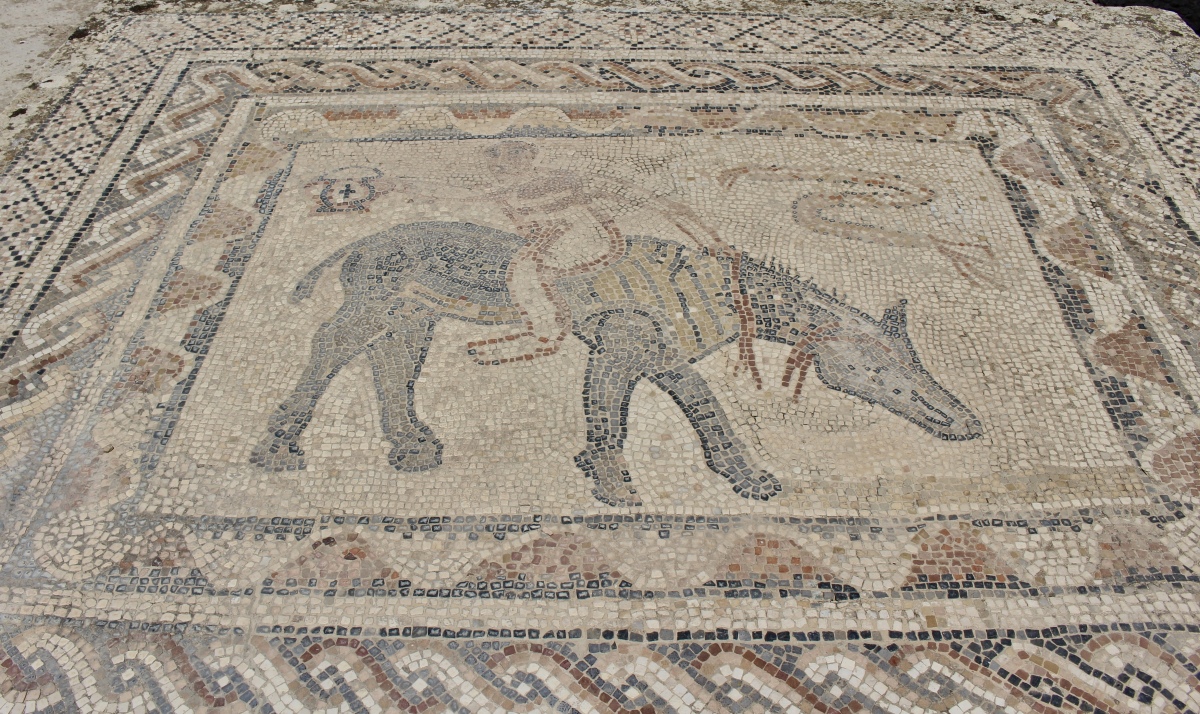 House of the Acrobat

The House of Ephebe showed a man who seems to be fishing with a lot of text and graffiti in a jumble all around him. 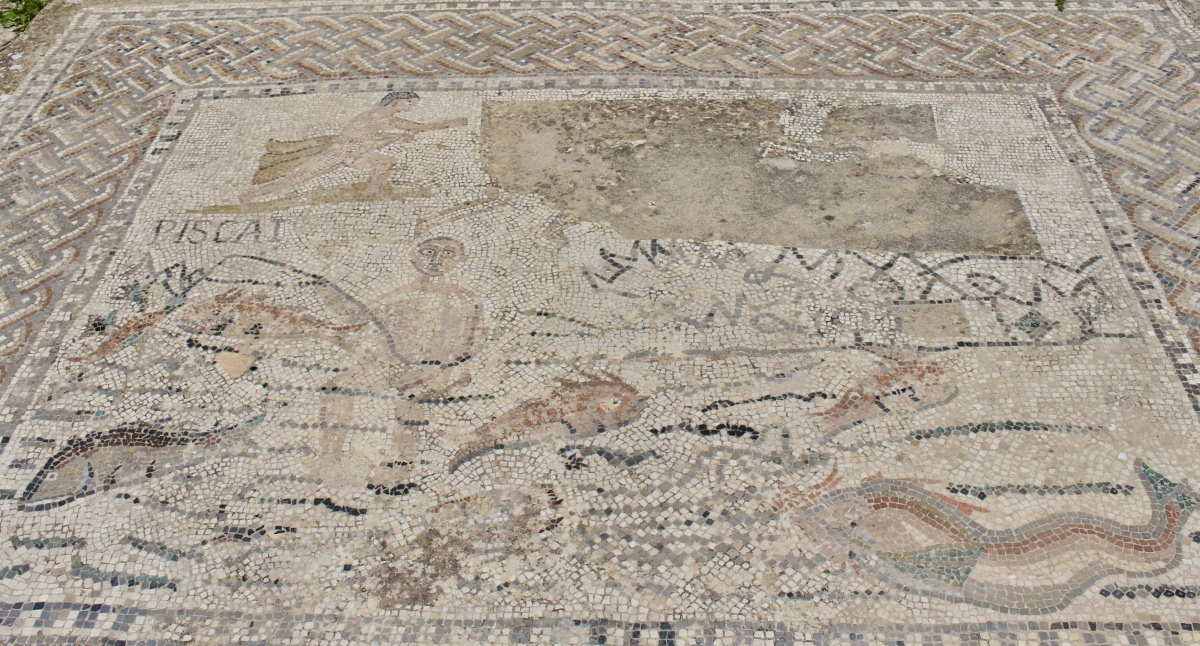 The Orpheus mosaic showed Orpheus taming the animals with his music.

The House of Columns had columns around an interior court. 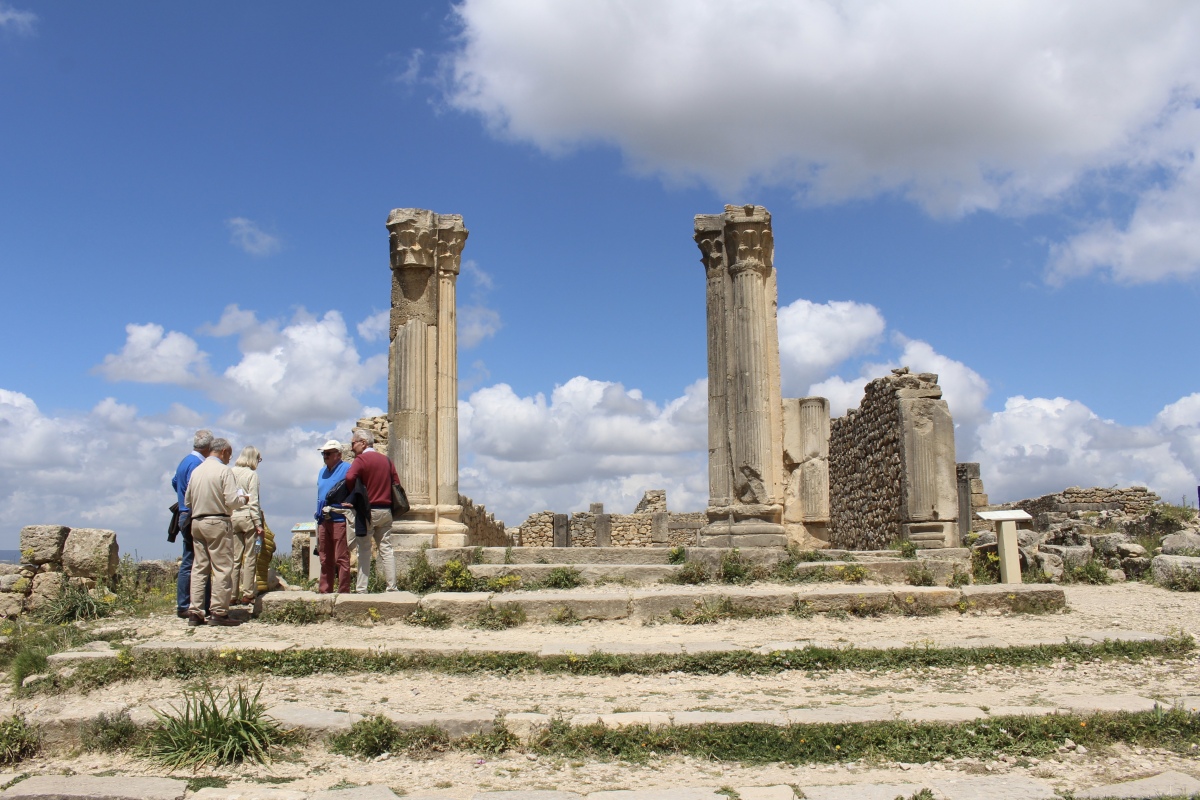 The House of the Knight had an incomplete mosaic of Bacchus and naked Ariadne.

Bacchus and naked Ariadne in the House of the Knight

The House of the Labors of Hercules had a circular mosaic showing the twelve labors.

House of the Labors of Hercules

In the House of Orpheus was a mosaic with nine dolphins.

We didn’t spend much time in the Interpretation Center, but I was caught by one mosaic: Mosaic of the Triton; its dolphins were a symbol of good fortune in Roman times.

Mosaic of the Triton

We stopped outside of Meknès for a lunch made by a women’s cooperative.  It was a rather derelict building in a rural area with mangy dogs wandering around. The ladies there served up a cucumber tomato salad, a delicious aubergine, lentils, chicken roasted with a nice sauce and olives, oranges and mint tea for dessert. 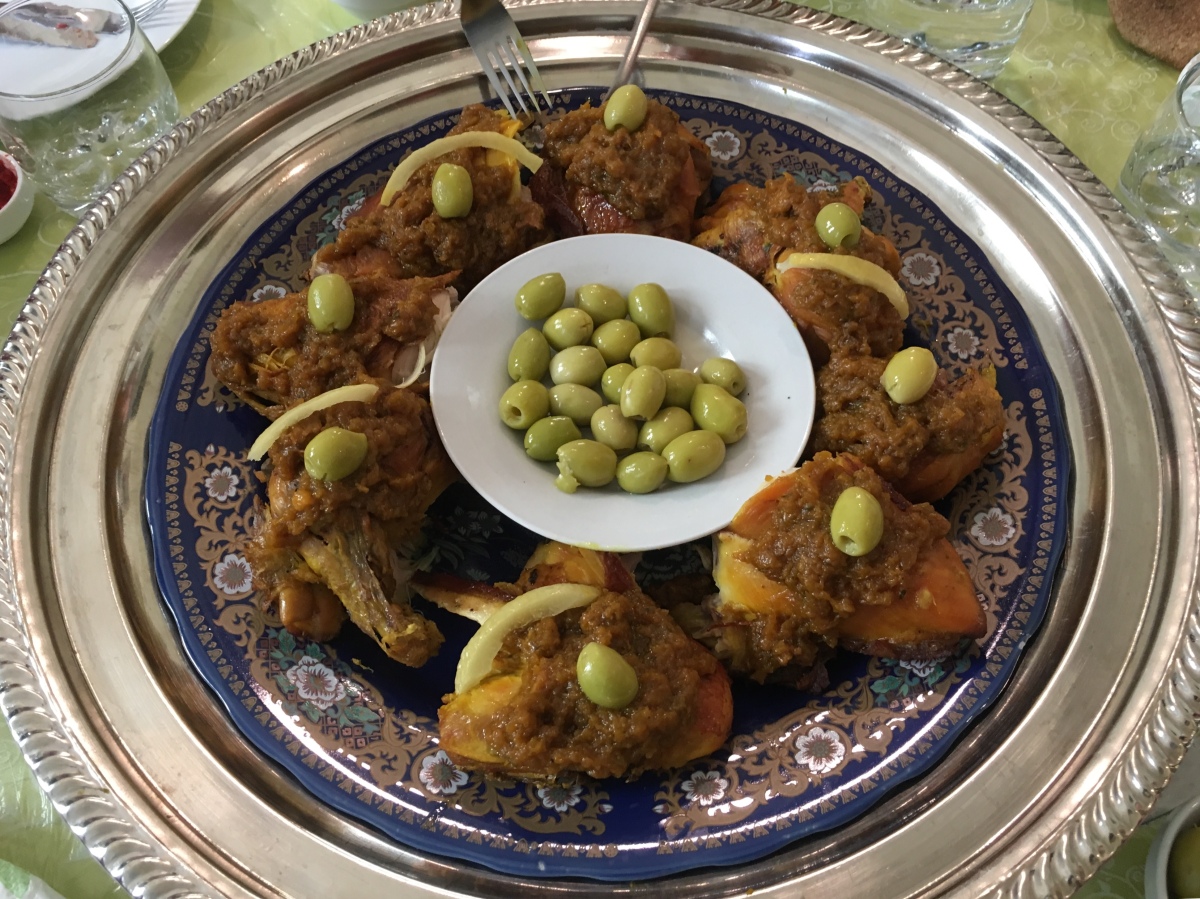 I said “Dusharufna” (an archaic form of “pleased to meet you”) to our driver Saeed and he got a hoot out of that.  He kept laughing and greeting me with a handshake and speaking to me in Arabic. It was funny when he laughed and smiled because he had braces, a mouth full of shiny metal.

As we drove the final half hour to Fès, Aziz told us that there are 35 CEOs with G Adventures in Morocco.  He told us habibi means sweetheart, but could also mean best friends for men.  I already knew about the “sweetheart” meaning, but not about the best friends between men.

We arrived in Fès around 5:00.  After settling into our room at Hotel Mounia, Susan and I walked past the food stalls and street vendors selling socks, belts, electronics and juices.  We walked down the wide avenue Hassan II, known by locals as the Camps d’Elysses.  We stopped at a café where I had a small Flag beer and Susan had a coffee.  Christian from Germany joined us for a beer as well.

It was a shame our hotel was in the new town, because it made it impossible to wander freely around the ancient medina of Fès.

After returning to the hotel, we met the group at 7:00 to go out for street food.  We had Moroccan soup with chick peas along with various kebabs – heart & liver, chicken, beef.  I only ate six kofta kebabs. While at dinner, Christian and I told Aziz we’d had a Flag beer at an outdoor cafe, and he argued that we couldn’t have done so because it’s illegal to drink in public in Morocco.  However, we did it, openly and without problem, so he was wrong, yet he continued to argue that we couldn’t have done so!

We went back to Symphonique, the bar in the basement of the hotel, and had another Flag beer and smoked some apple tobacco shisha, which brought back memories of smoking shisha along the Nile in Egypt, but not nearly as nice.  Chai, Gabe, Rene, Natalie, Christian and Susan were all there.

I finally started getting into my book, The Forgiven.  It had been a slow read thus far, but I liked the writing.

“PROSE” INVITATION: I invite you to write up to a post on your own blog about a recently visited particular destination (not journeys in general). Concentrate on any intention you set for your prose. One of my intentions was to write using my five senses, which I still struggle with, but tried to incorporate here.

It doesn’t matter whether you write fiction or non-fiction for this invitation.  You can either set your own writing intentions, or use one of the prompts I’ve listed on this page: writing prompts: prose. (This page is a work in process.) You can also include photos, of course.

Include the link in the comments below by Monday, February 10 at 1:00 p.m. EST.  When I write my post in response to this invitation on Tuesday, February 11, I’ll include your links in that post.

This will be an ongoing invitation. Feel free to jump in at any time. 🙂

Now, Here and Somewhere Else