The streets of Casablanca were deserted on Sunday morning. At Café de France, where we went for breakfast when we found our cafe next-door was closed, I enjoyed toast with cream cheese, olive oil and thyme, a café au lait, and orange juice. The servers were friendly; one enjoyed conversing with me in my elementary Arabic and teaching us a few Arabic words.  I had to give a coin to the bathroom guard upstairs.

This time, rather than fighting our way through construction debris, we took a Petit Taxi to the Hassan II Mosque. We walked around and took a few pictures of the outside, then backtracked east along the sea again. 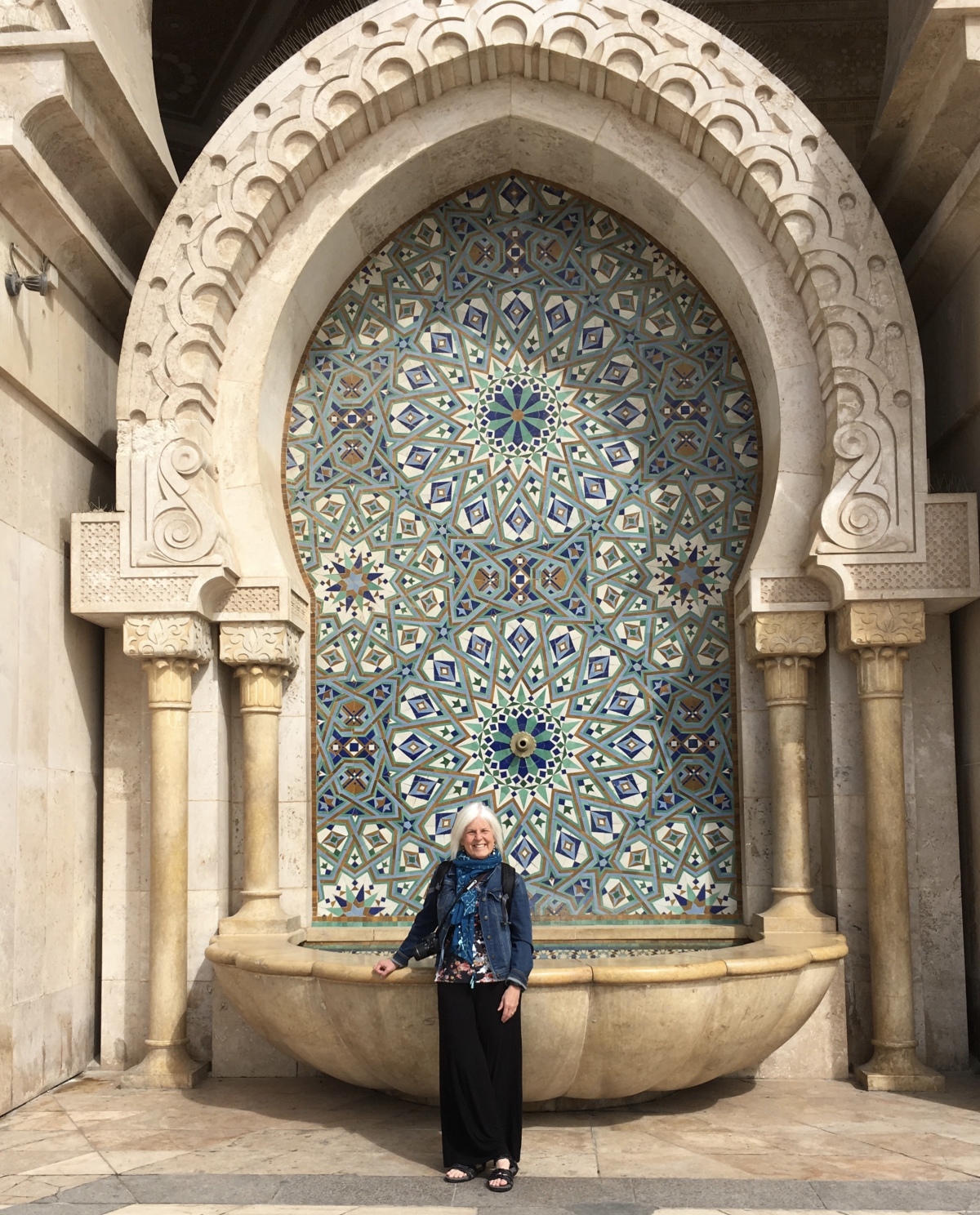 me at Hassan II Mosque

From the east, we had wonderful views of the mosque along with some interesting murals on the sea wall.

looking east at the mosque

After seeing all we wanted of the mosque, we continued west along Boulevard de la Corniche, overflowing with trash. Somehow we ended up in a derelict neighborhood that soon turned into a shanty town.  It was a horrible place.  Apparently a quarter to a third of Casablanca’s population lives in shanty towns in harsh conditions, in makeshift houses made of cardboard or  plastic, or in ruined buildings. There is no running water, sewage system or electricity, no schools, and no work. I could imagine the hopelessness and could see that this place might be a breeding ground for terrorism.

Here was the strong stench of garbage, piled everywhere, scattered around the containers.  It smelled like the stench outside my “villa” in Oman where feral cats were always getting into the garbage and spreading it everywhere. It was disgusting.  Trash was scattered all along the corniche.

view of Hassan II Mosque from the west, along Boulevard de Corniche 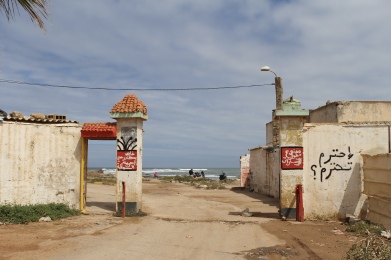 the sea off Casablanca

the sea off Casablanca

In the midst of all this, we suddenly came upon the upscale French restaurant with an ocean view – Cabestan. We sat outdoors on the patio, glassed in to keep the cold wind at bay, and watched the waves dashing against the rocky shore. After gobbling down too much warm bread, I ate four big pasta shells stuffed with smoked salmon, ricotta and spinach.  Susan had a seafood ravioli; I treated her as a belated birthday treat. It was lovely but a stark contrast to the shanty town all around.

Even the bathroom had a view of the ocean; the whole wall was glass and the toilet was in the corner, so when you sat on the toilet, your whole backside could be viewed from the sea.  Luckily no one was out swimming or boating in the water. 🙂

the toilet at Cabestan

After lunch, we continued our walk down the Boulevard de la Corniche.  The northern part was trashy; a big wall blocked views of the sea and another wall had an oddly out-of-place mural of Brooklyn. Derelict ruined concrete buildings tumbled into the sea.  Finally we got to a nicer area with beachside cafes, the Tahiti Beach Club and other beach clubs, empty and full pools, waves dashing against and over walls, palm trees, playgrounds, derelict hotels, little sand piles shaped like pyramids, and the the upscale Anfa Place Shopping Center. 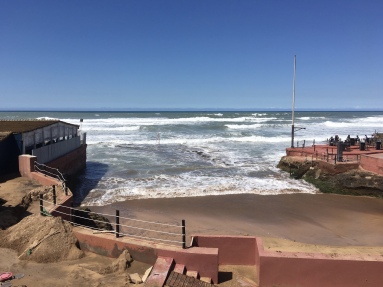 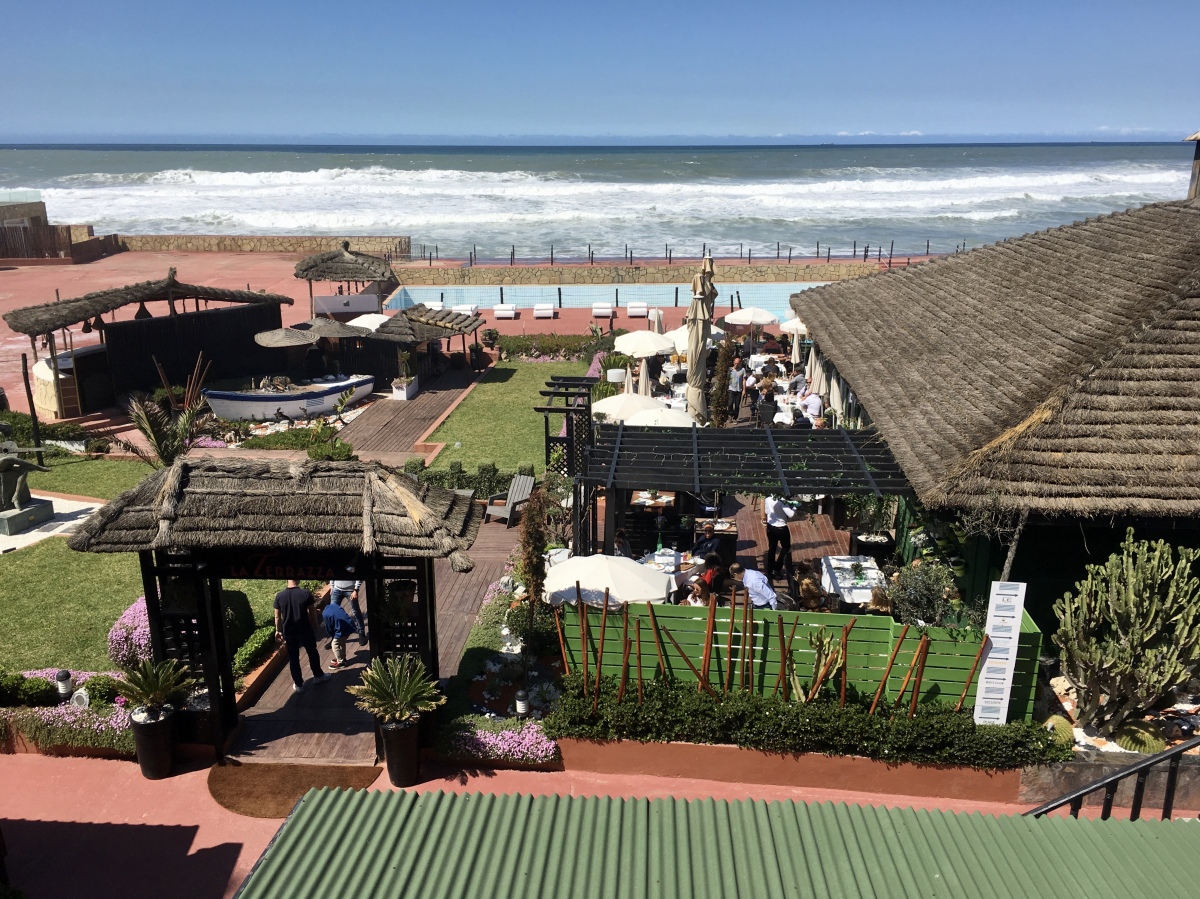 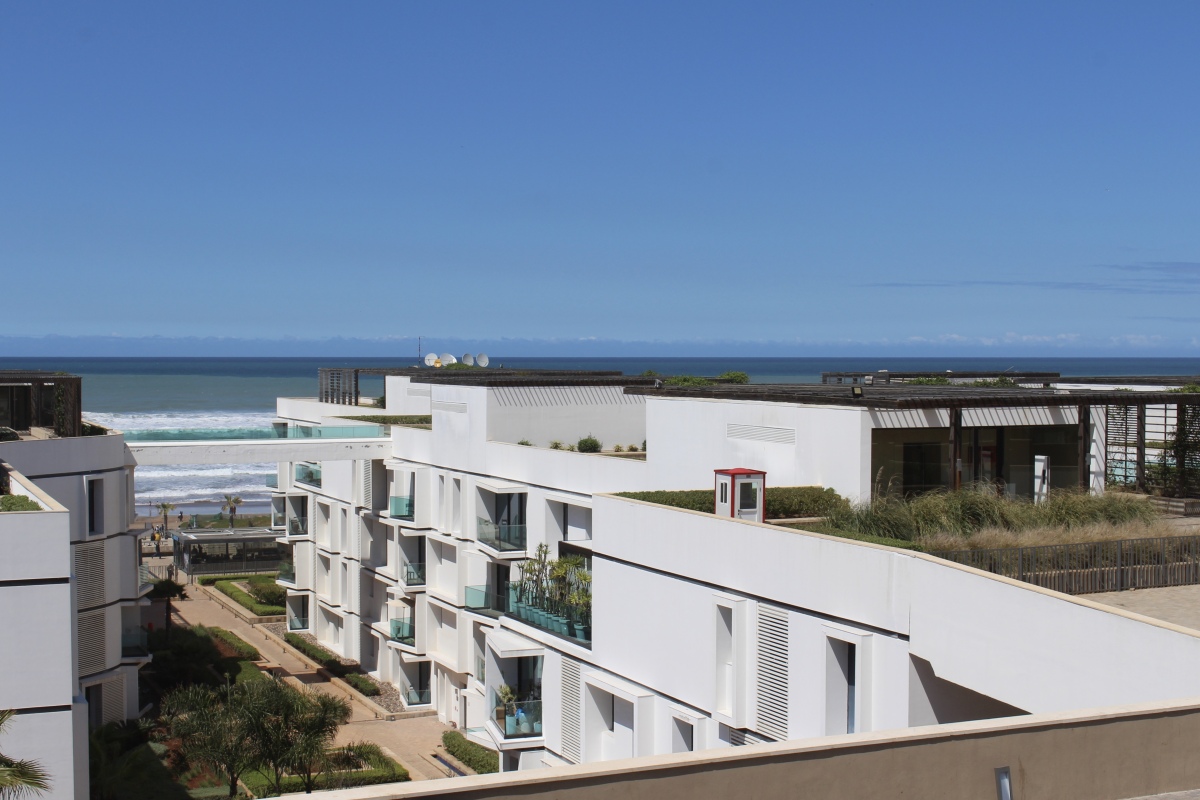 hotel along the beach

We stopped at a cafe under purple umbrellas overlooking the sea.  I sipped on fresh papaya juice while Susan had a cafe au lait. My feet were sore, so I was happy to give them a break. The corniche was swarming with people, women in djellabas and headscarves, skinny boys in ripped jeans and black or striped shirts.

me at Terrasse Café

In front of a mosque with a yellow front, we caught a Petit Taxi with Mohammed, decked out in gray sweatpants and a sweatshirt. A song blared on the radio, “Big in Japan,” that made me want to dance.  He drove like a maniac, passing cars into oncoming traffic and swerving to the right at the last possible moment.  He asked Susan how old she was, and she said “28, same as you.” He laughed and said, “You mean the reverse – 82?” We all laughed.

He dropped us at Quartier des Habous, or the Nouvelle Medina, an idealized modern version of a traditional medina, with neat rows of streets, shop stalls, and arcades.  Built by the French in the 1930s, it catered to western standards. It blended Moroccan architecture with French ideals. We found rugs, leather goods, djellabas, pointy slippers, and brass lanterns.  I bought a magnet and two bookmarks. One shopkeeper said his friend told him, “Don’t talk to Americans.  They’ll come in to shop but if you talk, they’ll walk away.” 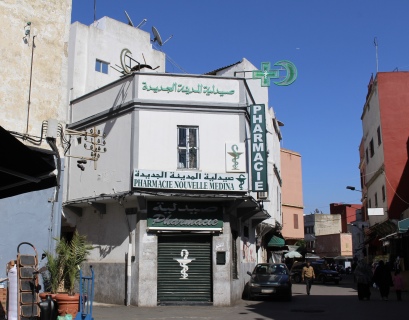 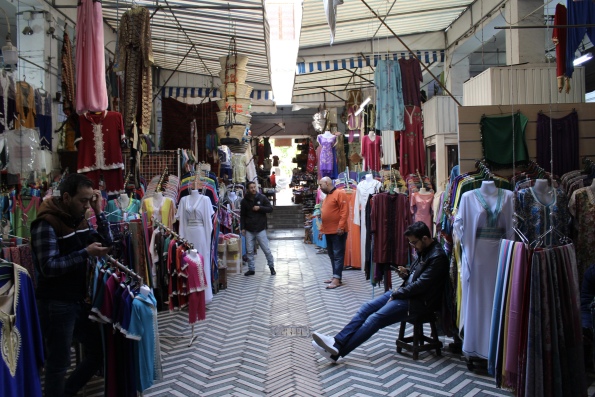 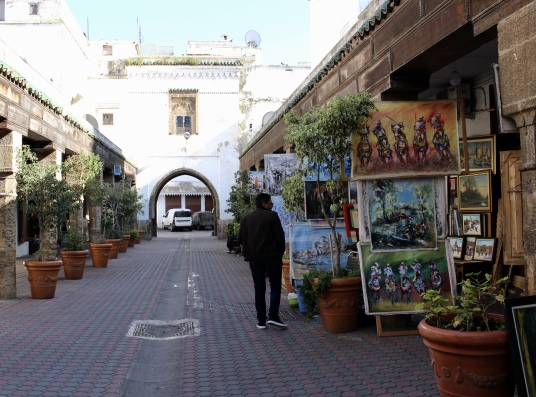 The call to prayer wafted over a loudspeaker as we admired colorful Moroccan paintings.

We walked back to town a long way through an abandoned and derelict commercial area, then finally caught a white taxi to Prince de Paris Hotel, catty-corner from our Airbnb. Susan picked up two oranges and I got a 7-Up, and we relaxed on the balcony of our apartment for a while.  It was a beautiful day – blue skies, a slight breeze, with temps in the mid-60s.  Absolutely perfect.

In search of dinner, we walked past Bab Marrakech to Casa José, a Spanish tapas bar.  The menu was only in Spanish and French so a bit baffling.  We relaxed in a nice wood-paneled room with high ceilings and large windows, high and low tables, and a bar.  I ordered gambas pil-pil (shrimp) and tortilla Espagnole.  Susan ordered chicken brochettes. I had a Corona but Susan didn’t seem to care to drink. I looked forward to being with a larger group, and hoped some would have a glass of wine or a beer with meals.  I enjoy having drinks with other people. 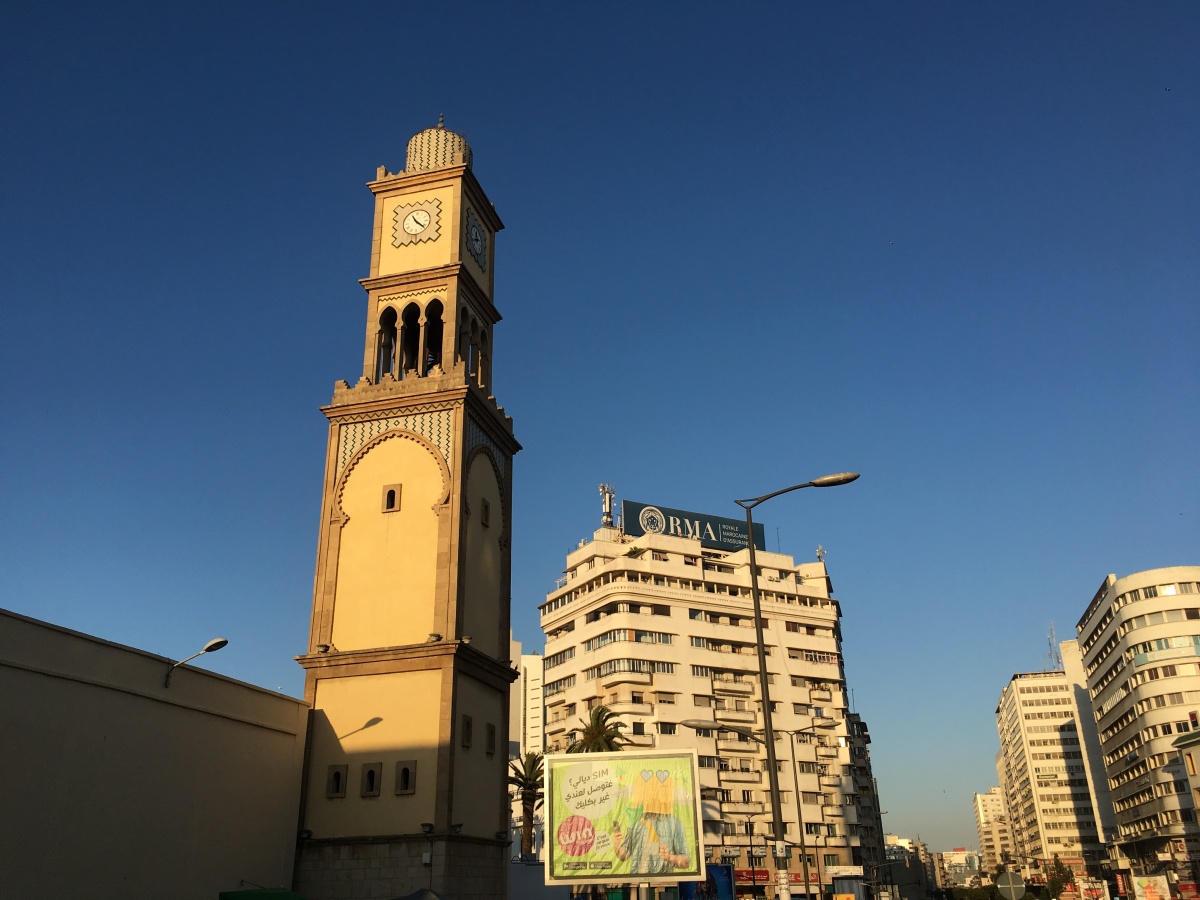 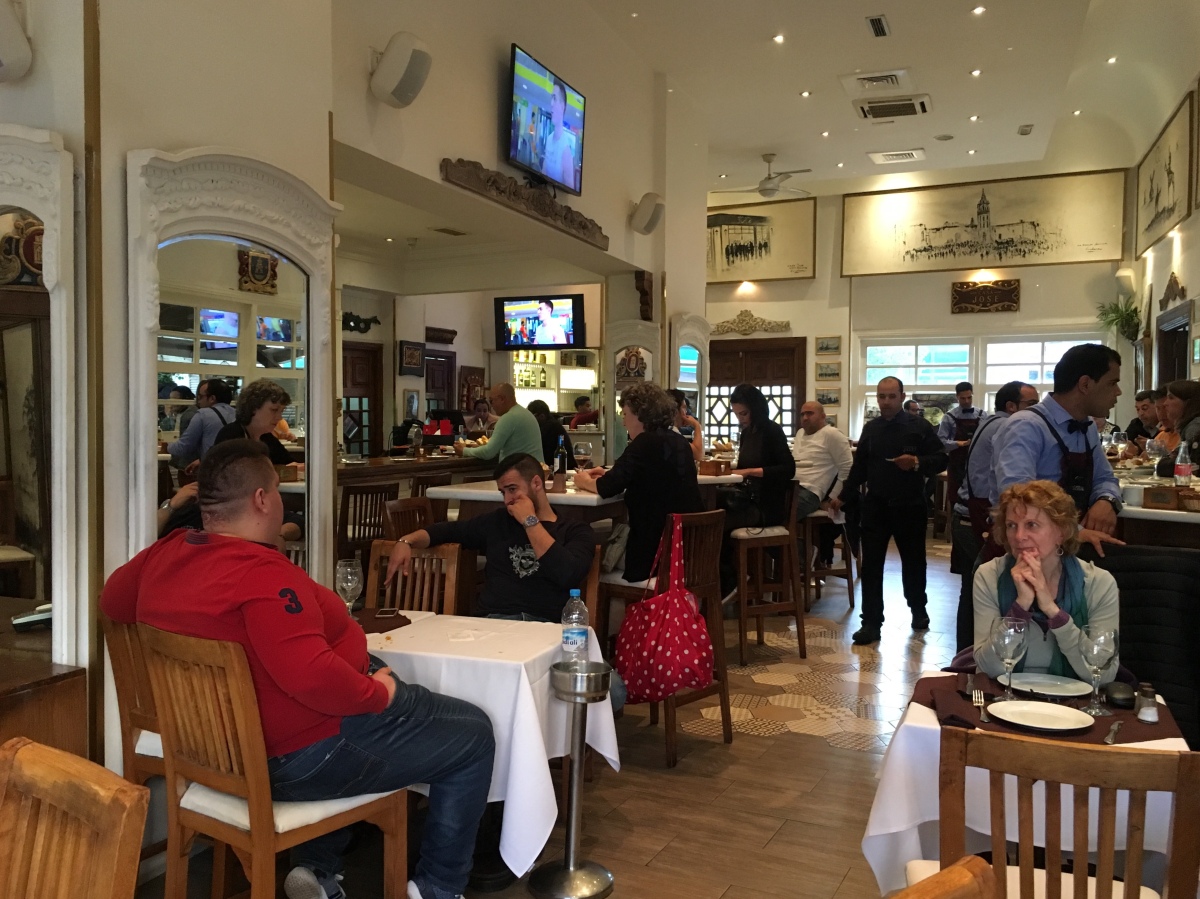 As we were walking back from Casa José, with my tortilla Espagnole in a take-out bag, a little girl came up beside me and fell into step.  She repeatedly put her hand to her mouth.  I simply took out the potato tortilla in its container and handed it over to her. I felt it was better to give her food than money.  I hoped she would eat it before taking it home to her parents. It was 3/4 of the tortilla I hadn’t been able to eat.

In the big square near our apartment, Place des Nations Unies, kids were driving motorized cars around in circles, much like I saw in Korea. Kids were playing soccer, riding on scooters, yelping, hollering and chattering. Big crowds milled about or sat on concrete barriers.  It was blur of motion and bustle. Most women wore the hijab, but some of the younger ones didn’t.  The clothes sold in shops were shiny, glittery and gaudy, and these were the clothes the women seemed to wear when they were out on the town.

This post is in response to Jo’s Monday Walk: Benafim to Alte.