Before taking a bitter-cold walk through the Clifton Gaslight District in Cincinnati, we stopped for lunch at Skyline Chili. This 1966 store is supposedly the busiest location in the franchise and still retains an old-time feel.

I was warmed by a Cincinnati Chili 4-way (the 3-way signature dish of “steaming spaghetti, covered with the original secret-recipe chili and topped with a mound of shredded cheddar cheese,” with the addition of diced onions to make it a 4-way).  Mike ordered two Cheese Coneys (“a specially-made hot dog in a steamed bun, with mustard, covered with … original secret-recipe chili, diced onions and a mound of shredded cheddar cheese”).  We shared them and they hit the spot.

Cincinnati Chili is different from most types of chili; for one, it is rarely served in a bowl.  It is more of a Mediterranean-spiced meat sauce used to top spaghetti or hot dogs. These dishes are regional dishes in the Cincinnati area and were created in the 1920s by Slavic-Macedonian immigrants from Greece. Common spices include cinnamon, nutmeg, allspice, clove, cumin, chili powder and bay leaf. Specific combinations are known as “ways,” and are often served with oyster crackers and mild hot sauce. 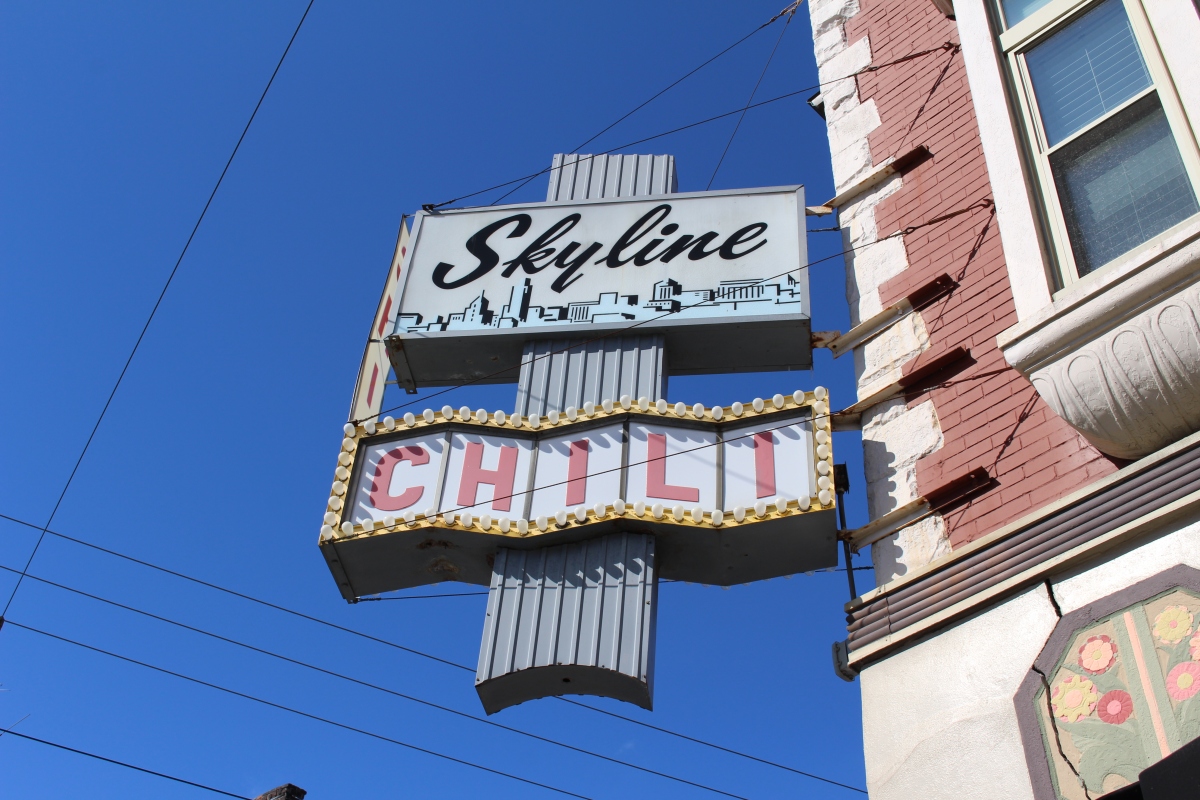 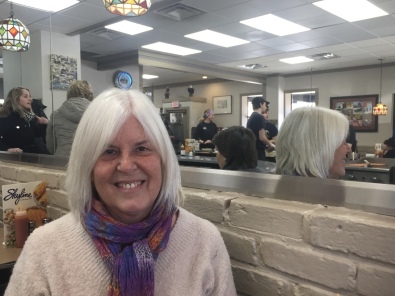 me at Skyline Chili 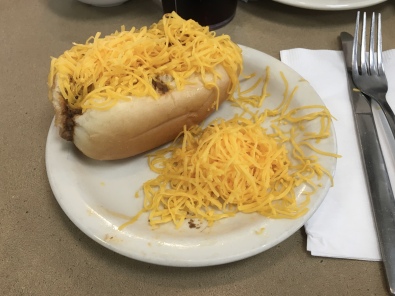 After fueling up with our “ways,” we took a long walk through the Historic Clifton Gaslight District’s tree-lined lanes (although the trees were bare because it was winter).

We admired the sturdy brick homes, huge brownstones, and Victorian-style mansions with their turrets and porches. The neighborhood was a bit hilly but very pretty.

The Public Library of Cincinnati and Hamilton County 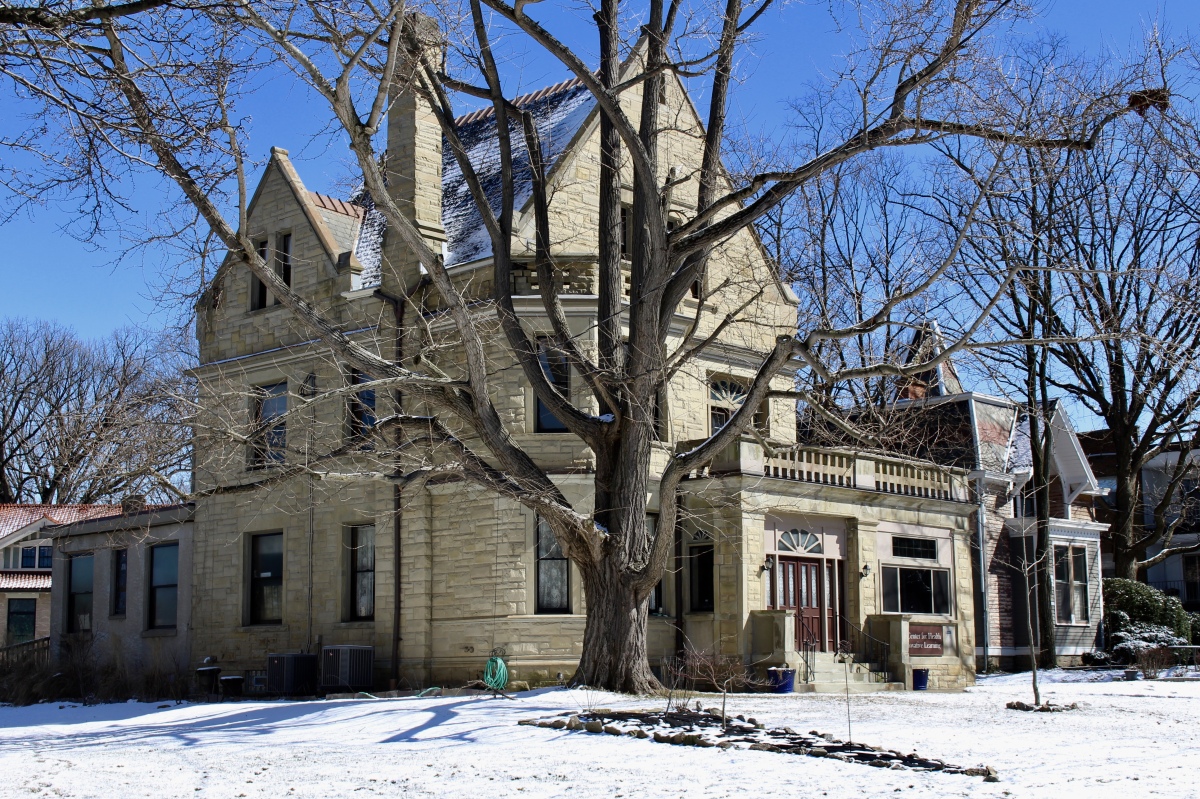 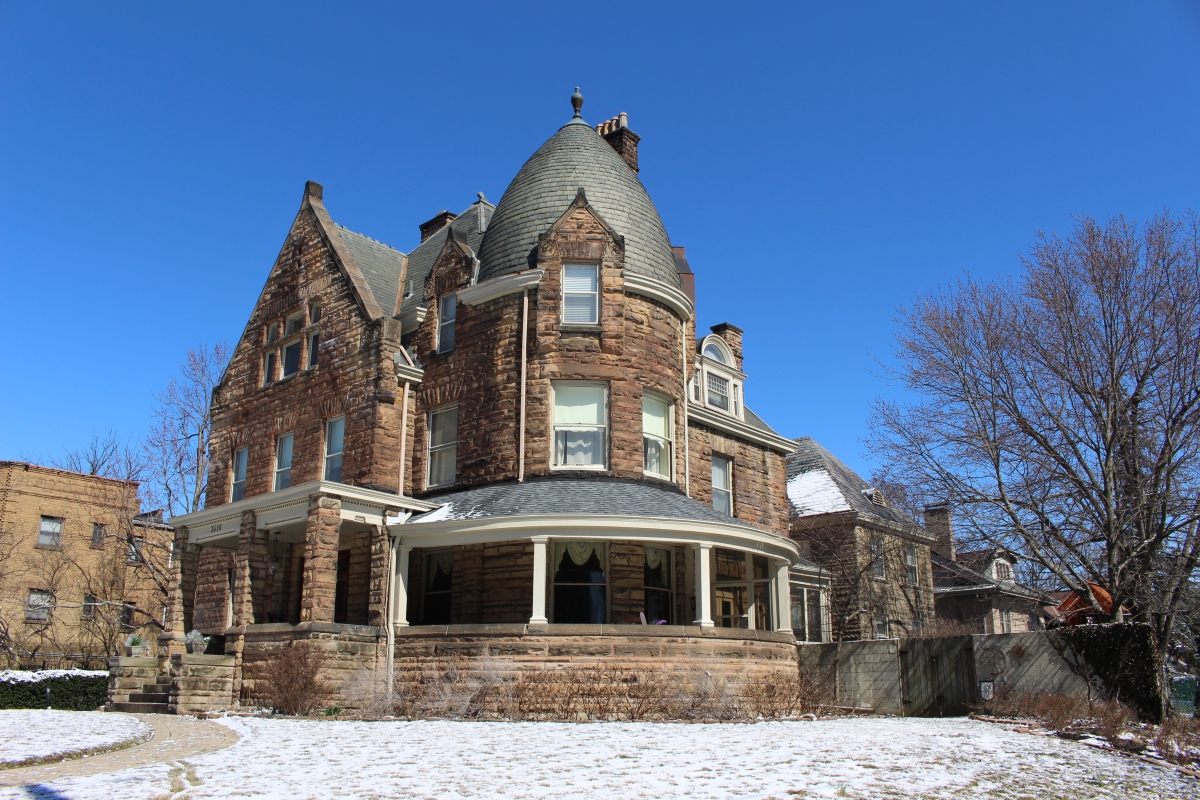 Clifton is known as a gaslight district because of the gas lamps that were installed in the 1840s by Cincinnati Gas Light and Coke Company.  By 1875, the city had more than 5,000 public gas lamps.  By 1901, it became clear that electricity was the way of the future, yet even to this day more than 1,100 of the gas lamps are still in use in many Cincinnati neighborhoods, according to Walking Cincinnati.

gaslight in the Clifton Gaslight District 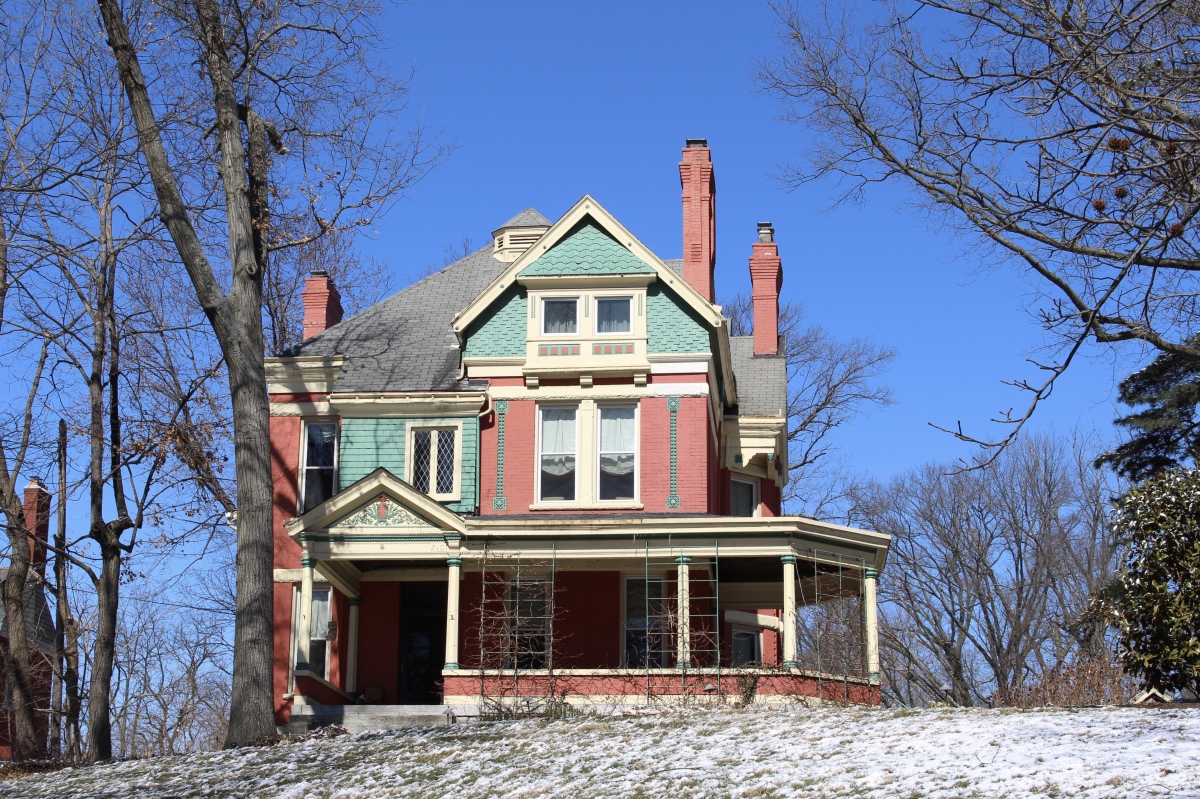 Annunciation of the Blessed Virgin Mary Parish, founded in 1910, is located in the heart of the Gaslight District of Clifton. 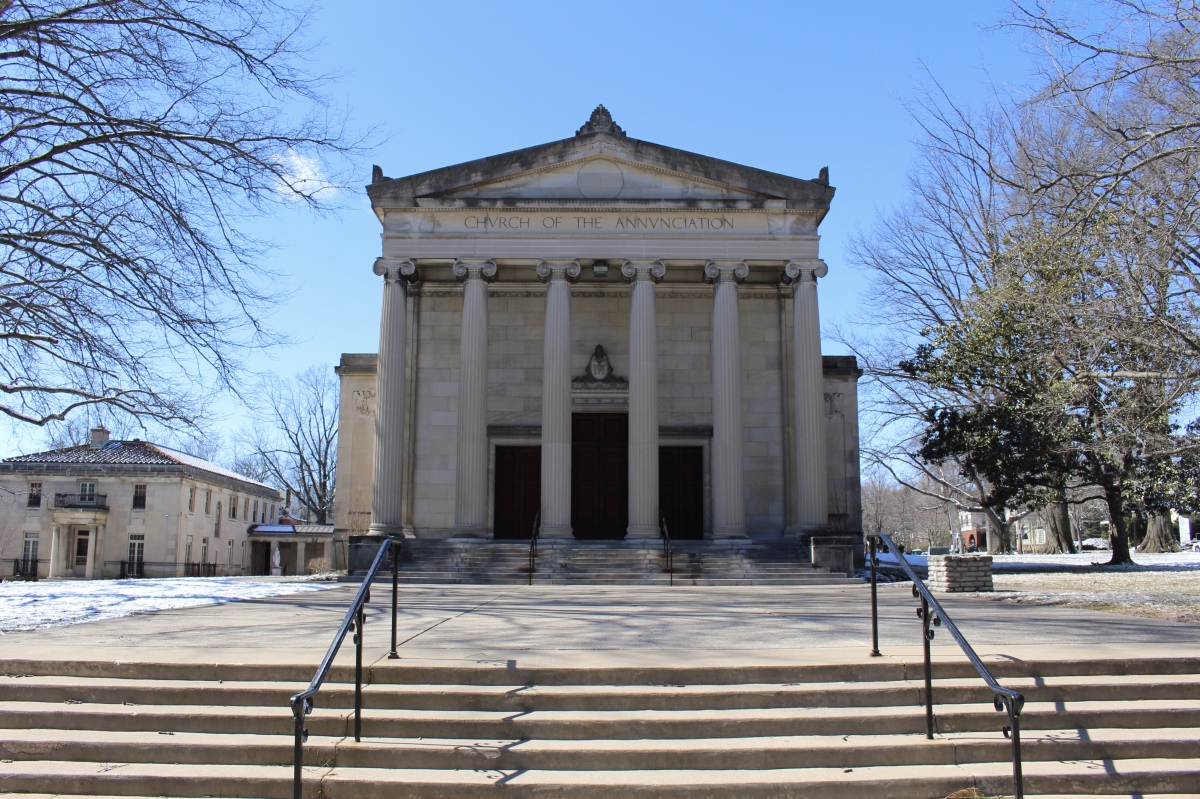 Church of the Annunciation 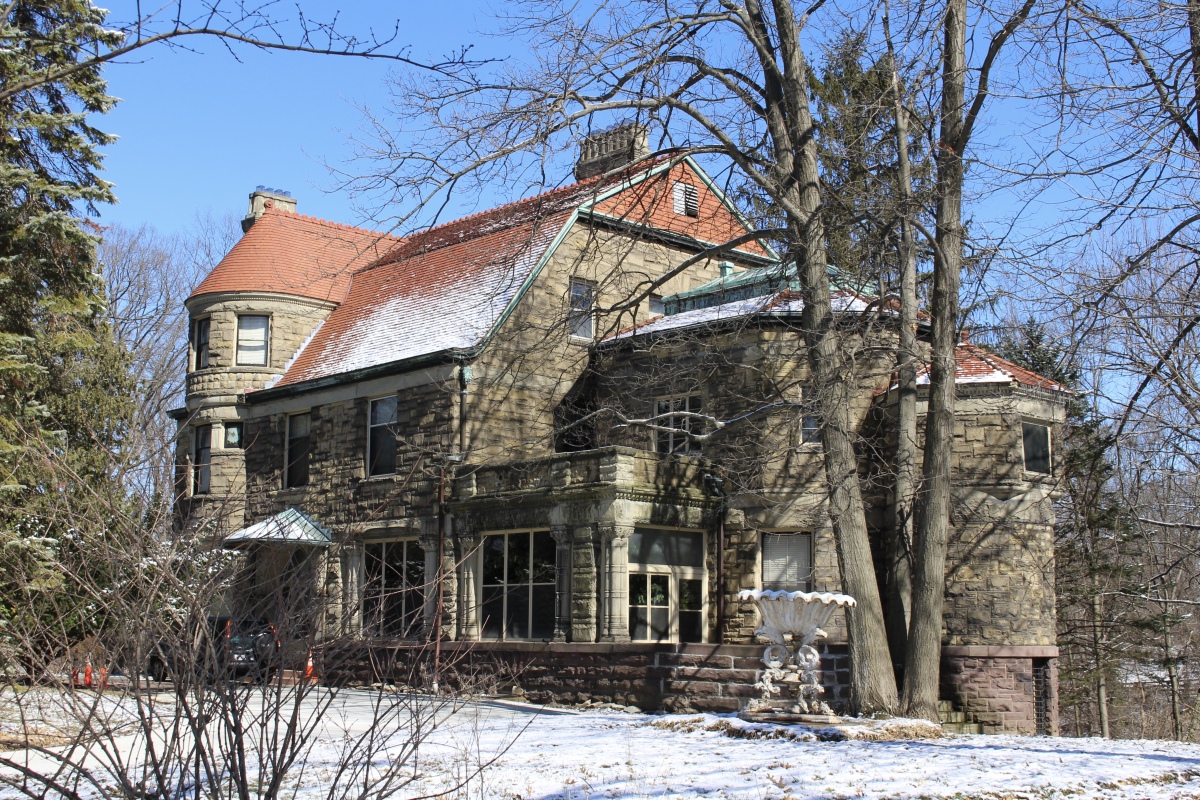 The house at 334 Thrall Street, or Blenheim, is designed in more of a Dutch style than many of its German neighbors, and has a painting of Mespelbrunn Castle in Germany on its front wall. 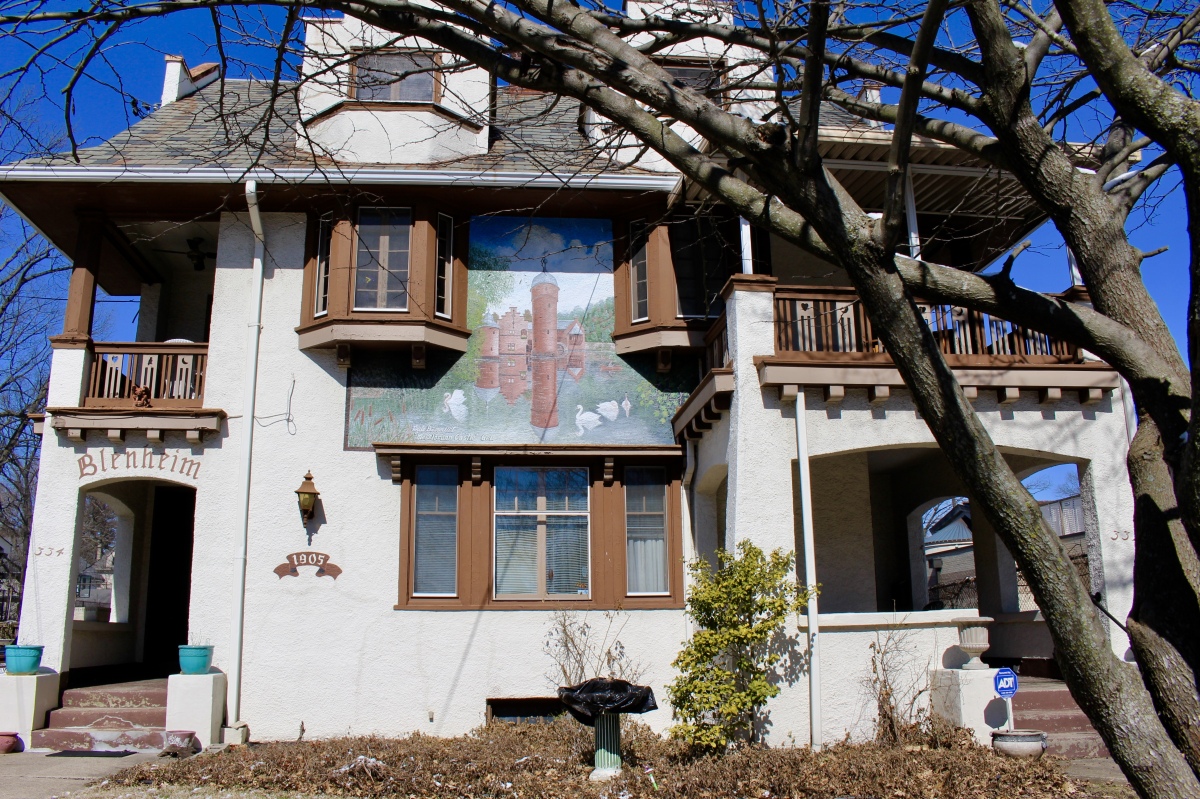 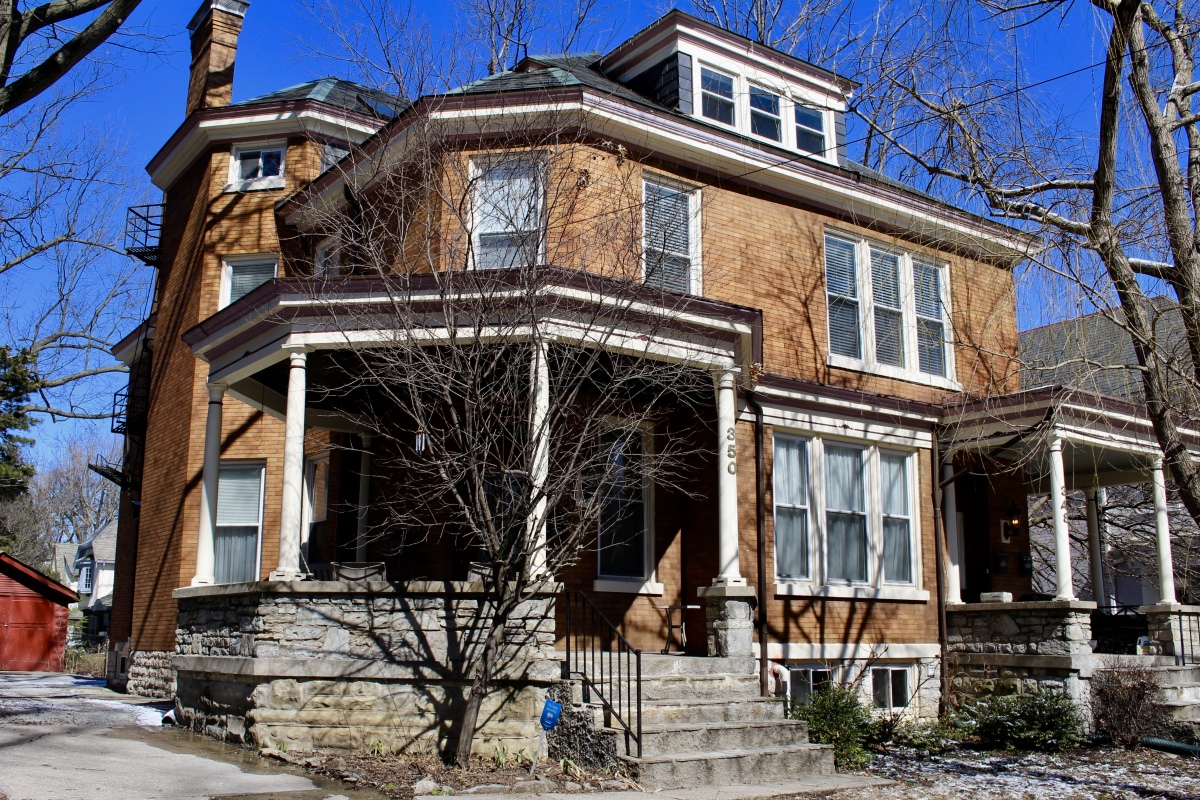 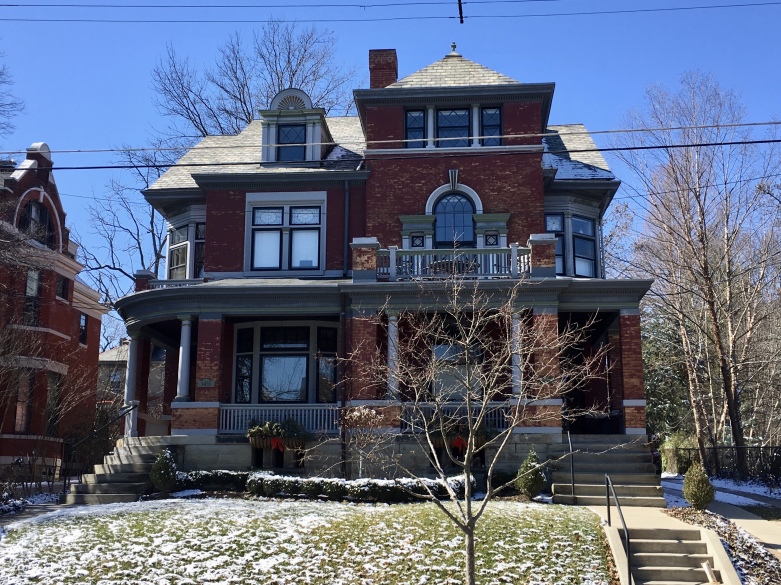 We approached Ludlow Avenue, which is the main commercial strip, where historical Clifton residents came to get their goods. We popped into a few shops, and admired the theater and a couple of murals.

The old Ludlow Garage was originally an automobile shop.  For two years, from 1969-1971, it became a rock-and-roll venue.  Now, part of the building holds the local independent Ace Hardware but there are apparently plans to turn the building back into a music venue.

Habañero is a burrito place. 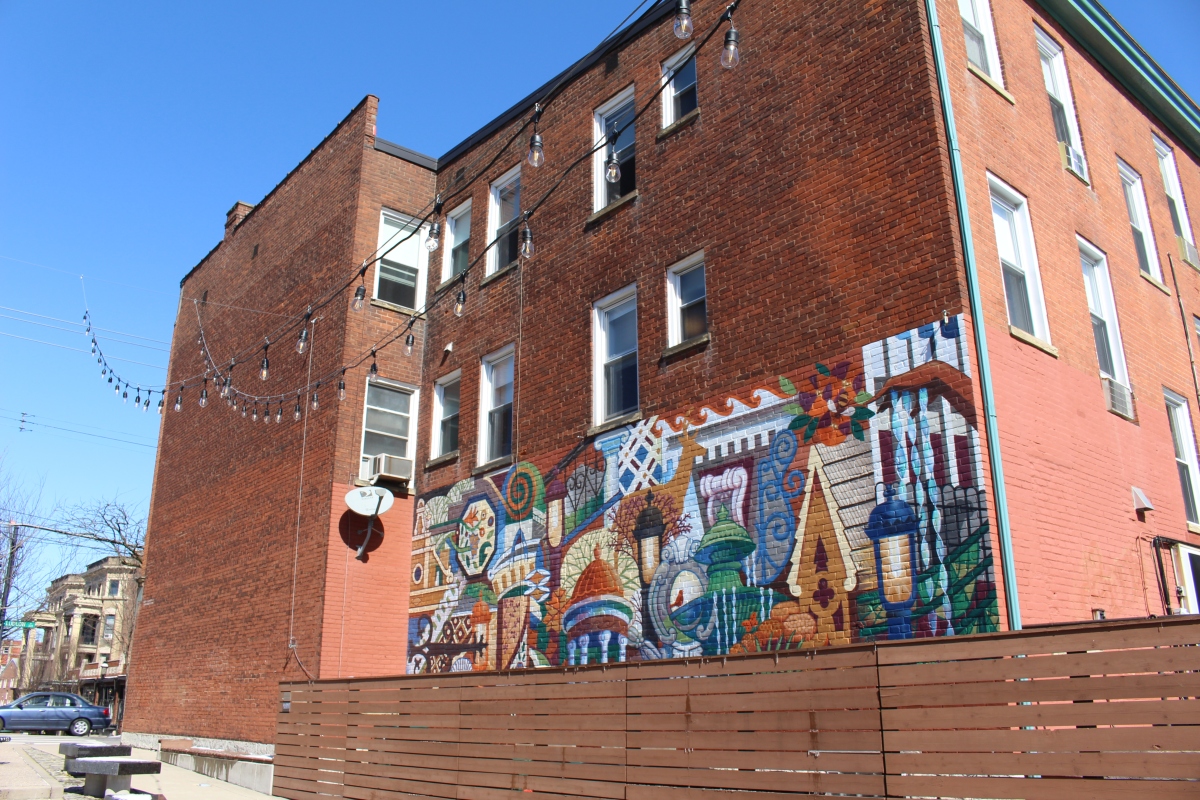 The Esquire Theater is an independent theater that opened in 1911 to show silent films.  It now has six screens and shows movies that are outside the mainstream, drawing moviegoers from all over the city. It shows first-run feature films, as well as independent, foreign and low-budget films. 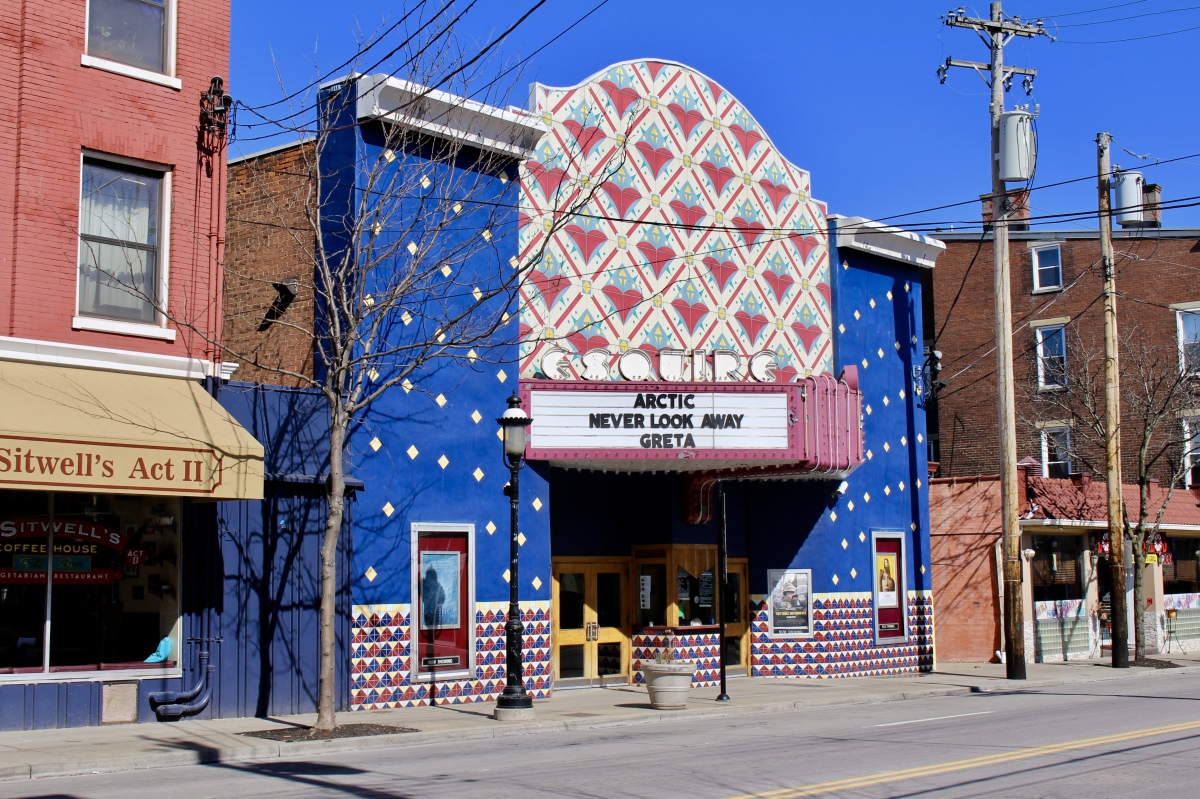 The Esquire Theater on Ludlow

We enjoyed some warmth and a hot fudge sundae at Graeter’s Ice Cream, begun in 1868 by a young Louis Graeter.  For more on the history of this Cincinnati icon, see Our History – Graeter’s. 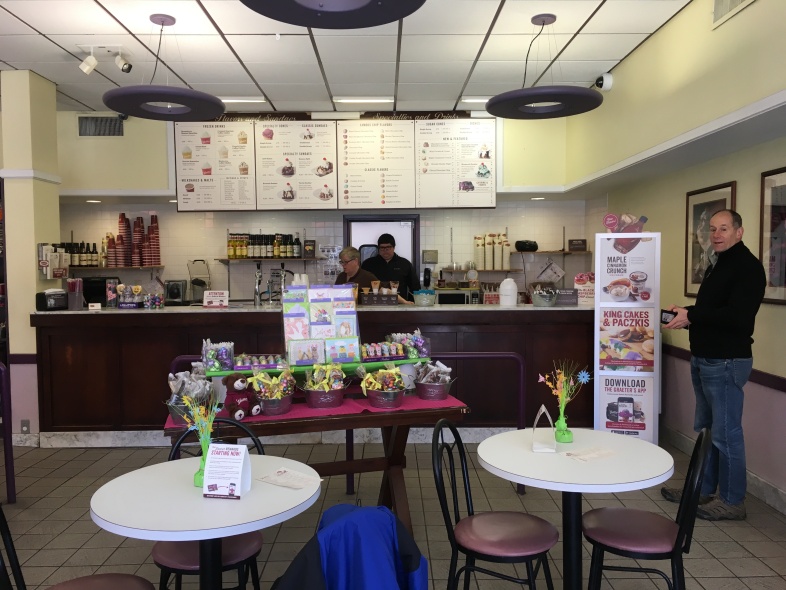 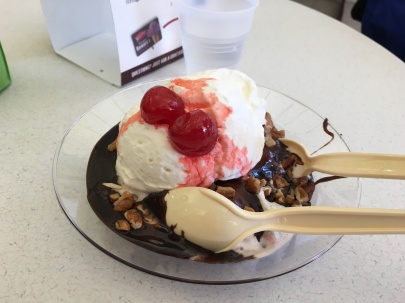 It was too cold to continue walking, so we got in the car and drove around through the “Clifton Historic Mansions: Mannered Streets” walk from Walking Cincinnati.

Clifton was originally a wealthy residential suburb of Cincinnati in the 1840s.  Many of the beautiful 19th century houses in the neighborhood are included in the National Register of Historic Places.

The Duhme House, built in the American Colonial Revival Style, was built in 1892 for the jeweler Charles Duhme and his wife, Ophelia. 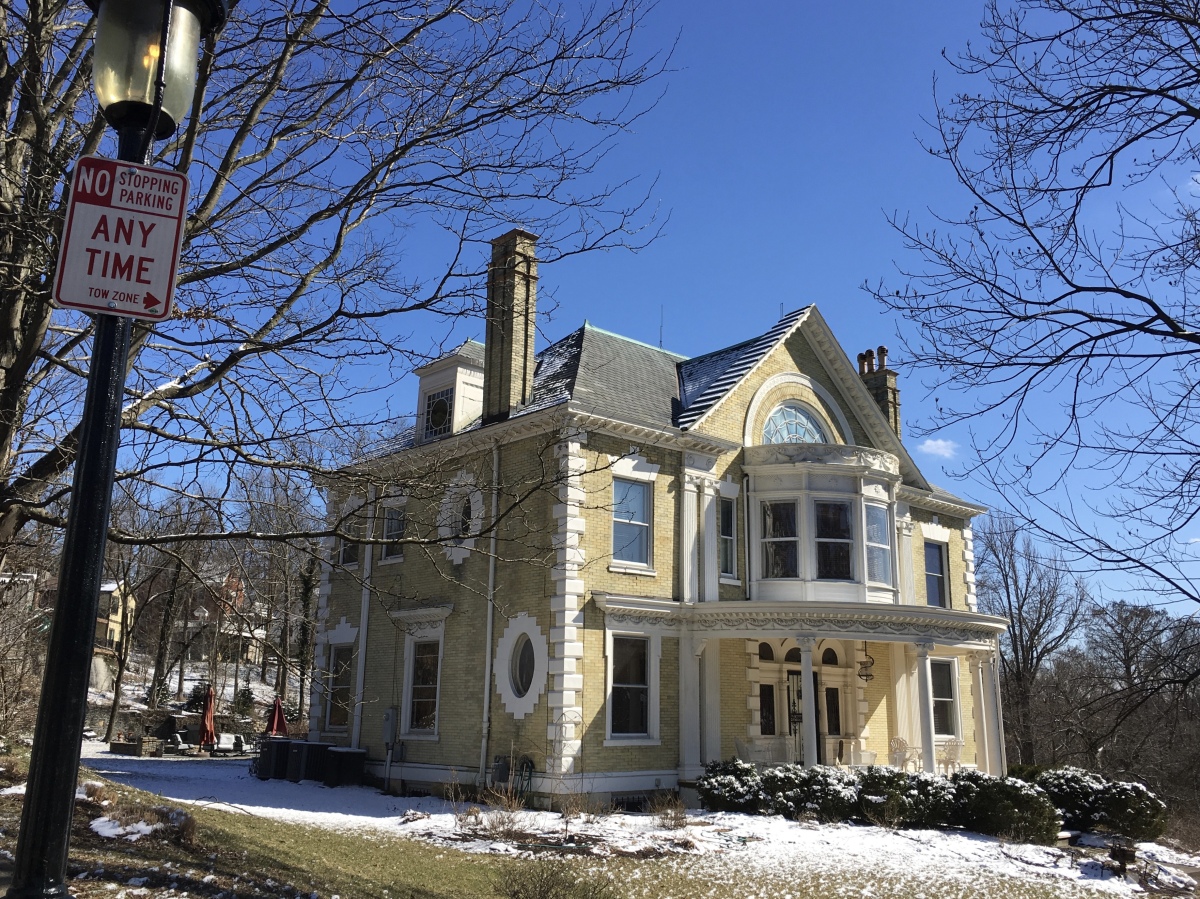 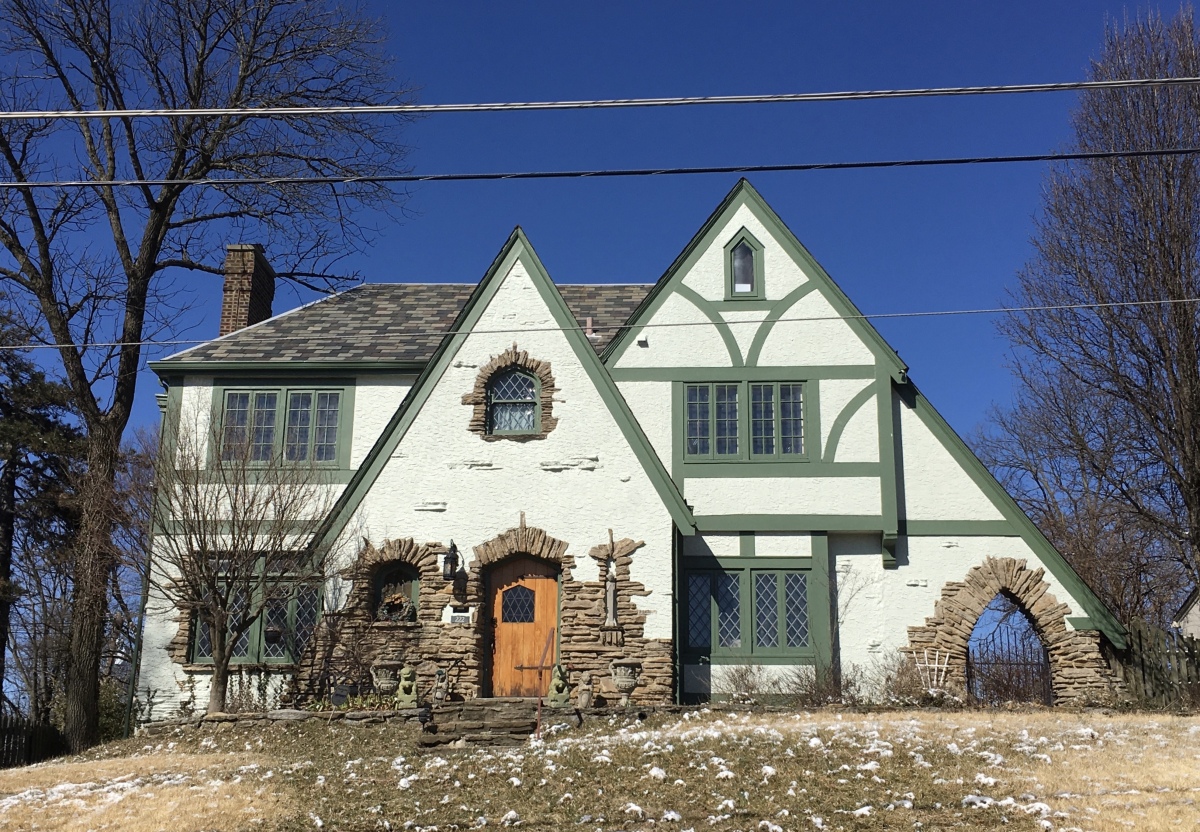 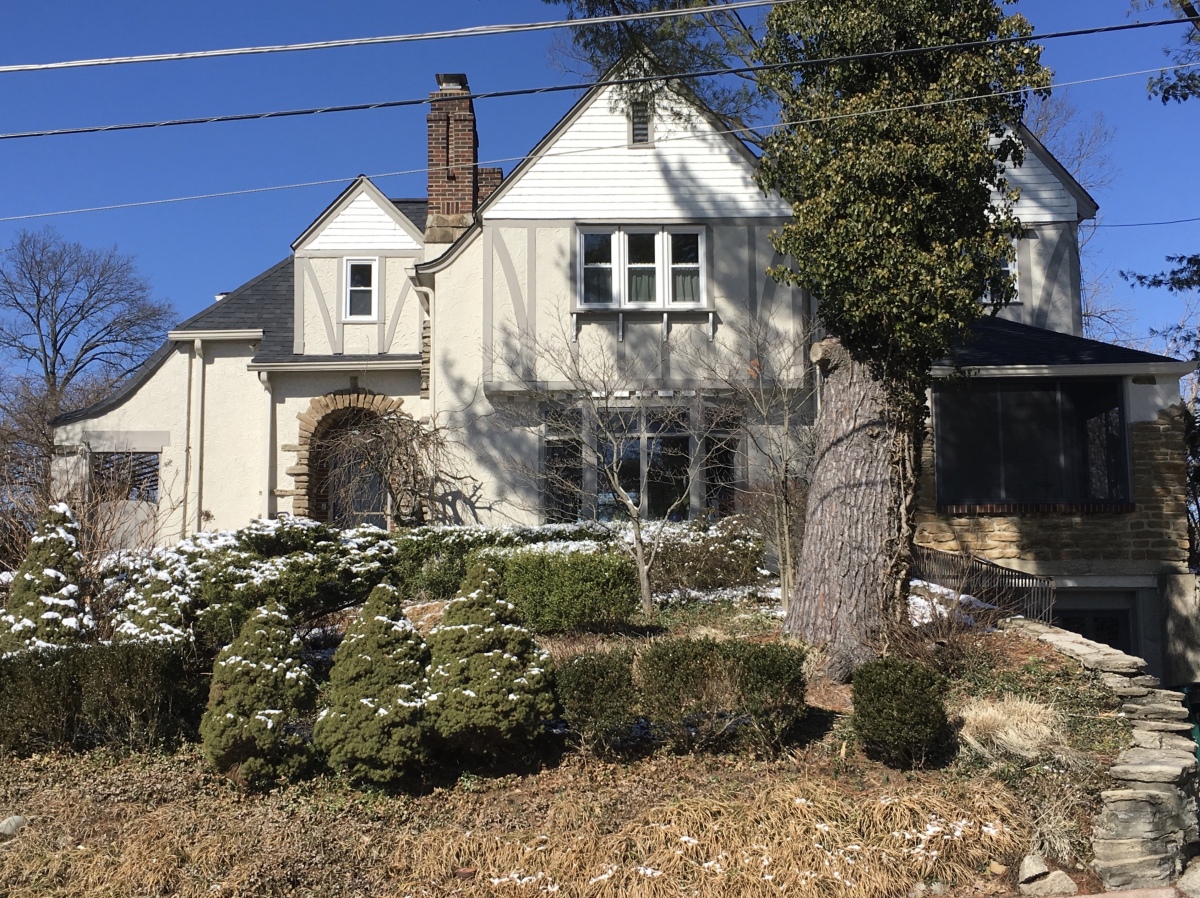 The Probasco-Reakirt House was designed in 1866 for Henry Probasco, the mayor of the village of Clifton. The mansion is in the Norman Romanesque Revival Style, with the outside elements a combination of textured sandstone and limestone.

The two-story Boulter House was designed by Frank Lloyd Wright and was built in 1956 for Cedric and Patricia Boulter, Greek scholars at the University of Cincinnati. 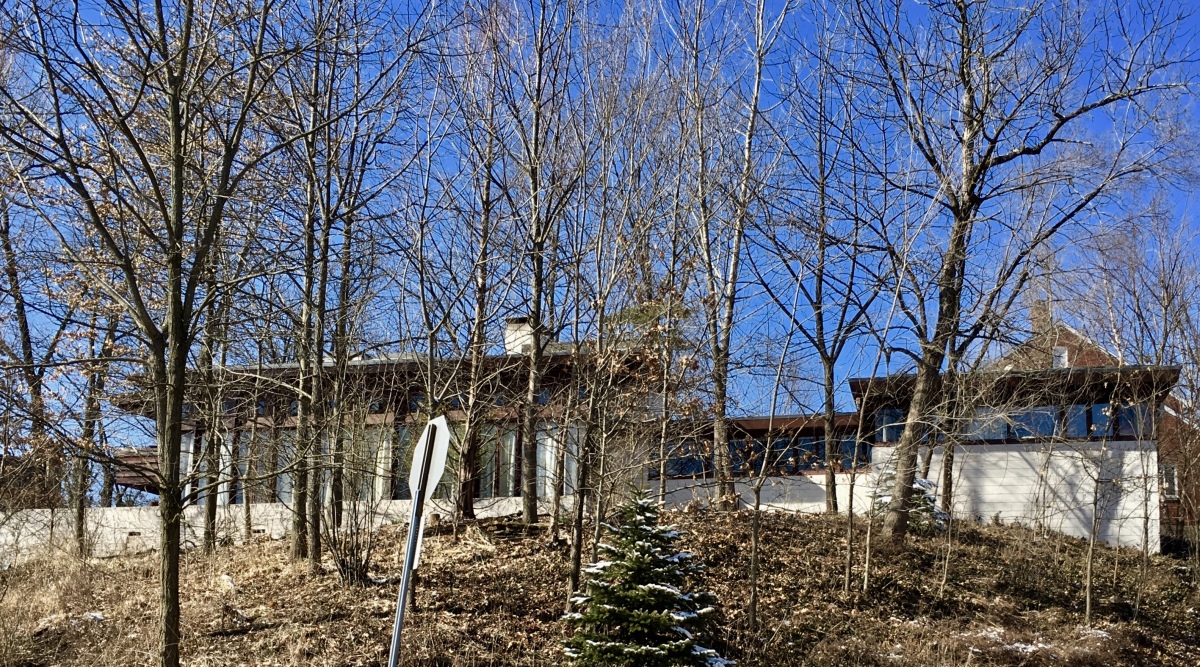 Then we drove to Oakley, 8 miles northeast of downtown Cincinnati,

On the side of Loesch Hardware on Madison is the Morning, Noon, and Night ArtWorks mural. 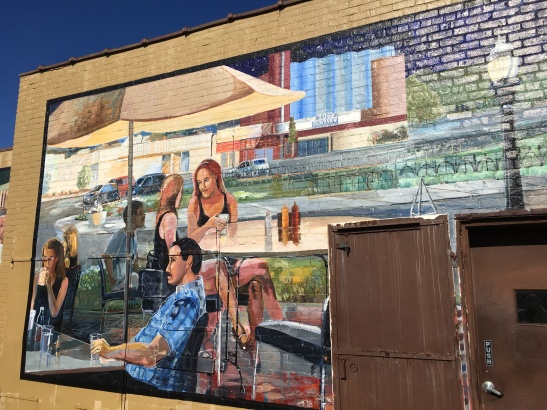 Bordering Oakley Square is the cool retro 20th Century Theater.  This Art Deco building with its 72-foot tower escaped demolition in the early 1990s and is now a concert and special events venue.  It was listed on the National Register of Historic Places in 1993. 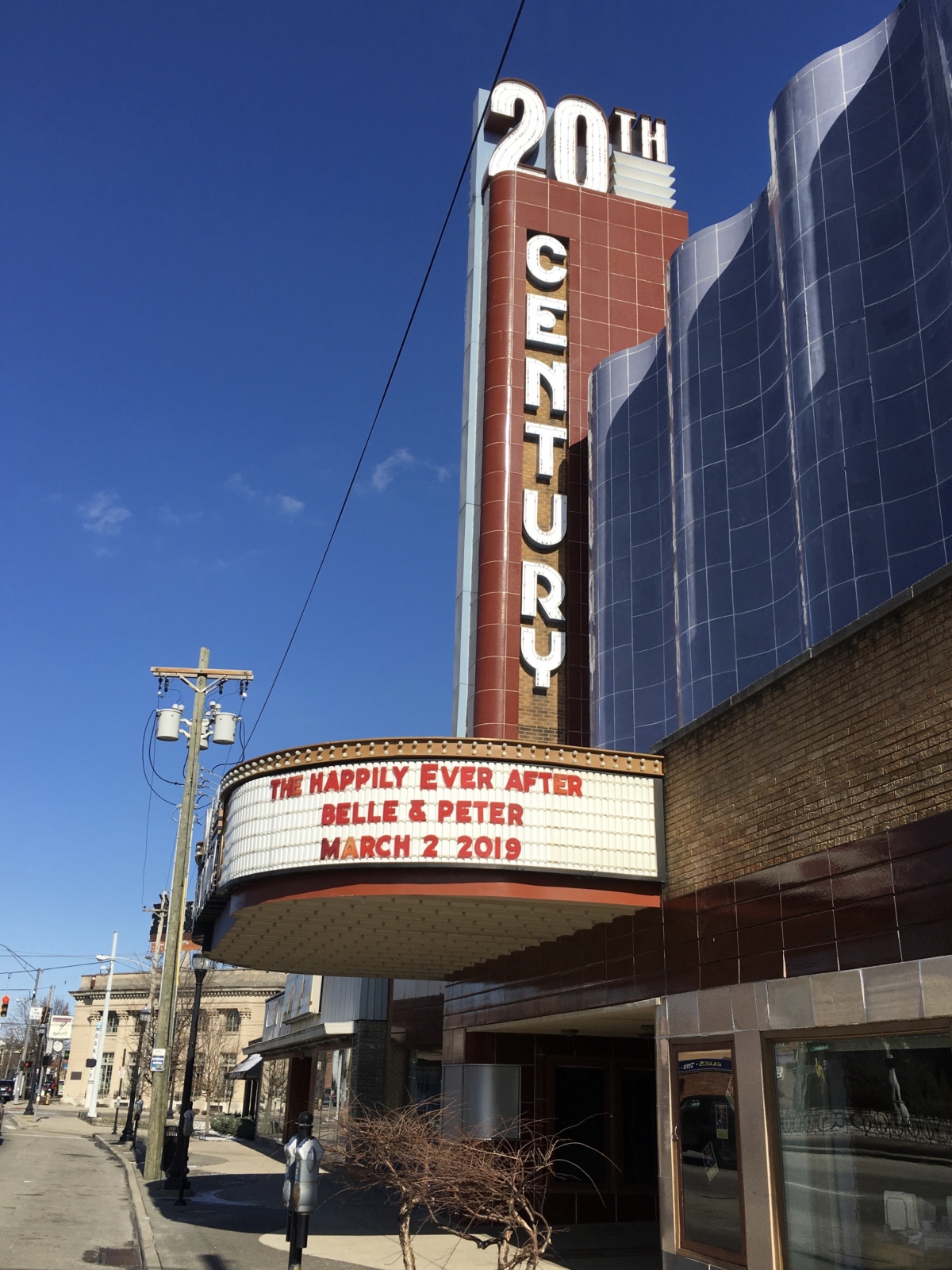 Mike was fading fast and seemed about to fall asleep, so we drove back to our Airbnb in Covington, KY.  There, I checked in with my online Found Poetry class and Mike watched The Ballad of Buster Scruggs; I joined him to watch the last three vignettes.  We ate leftovers from our dinner the night before, a leftover chicken pot pie and truffle fries, as well as a wild rice salad we’d bought at Findlay Market.  We were going to watch Happy Valley, which my sister and I had started watching in Illinois, but we lost our cable connection. We were happy just to stay in and enjoy our cozy home-away-from-home.  We’d been out all day in the frigid temperatures, so it was nice to stay warm for an evening.

For our walks, we used the fabulous book, Walking Cincinnati: An Insider’s Guide to 32 historic neighborhoods, stunning riverfront quarters, and hidden treasures in the Queen City by Danny Korman and Katie Meyer. There were many more walks we didn’t have time for during our three day visit. I wish we could find books like this for every city in the U.S.

In my case, my intention was to look for thematic possibilities during my Midwestern Triangle Road Trip and I found some of the Cincinnati neighborhoods quite charming.

I challenge you to post no more than 20-25 photos (I have more here!) and to write less than 1,500 words about any travel-related photography intention you set for yourself. Include the link in the comments below by Wednesday, August 14 at 1:00 p.m. EST.  When I write my post in response to this challenge on Thursday, August 15, I’ll include your links in that post.

This will be an ongoing invitation, every first, second, and third (& 5th, if there is one) Thursday of each month (I’ve now added the second Thursday). Feel free to jump in at any time. 🙂

Thanks to all of you who shared posts on the “photography” invitation. 🙂

Nature through the eyes of a paintbrush