Chaco Culture National Historic Park was a major cultural center between 850 and 1250 AD, and it is remarkable both for its monumental architecture and its status as a center of trade, politics and ceremony.  It was designated a UNESCO World Heritage Site in 1987.

The park is in northwestern New Mexico, and can only be accessed by dirt roads. From the south, one must traverse a 20-mile-long rough dirt road, and since I drove from Gallup, NM, this was the way I came.

From Gallup, I drove past the spectacular Red Rocks, the Wind Bells Indian Village and the Continental Divide, and then through the San Jose Watershed. I stopped at Giant to buy a huge bottle of water, and stood behind a Native American man buying a 12-pack of Budweiser at 10:00 a.m. 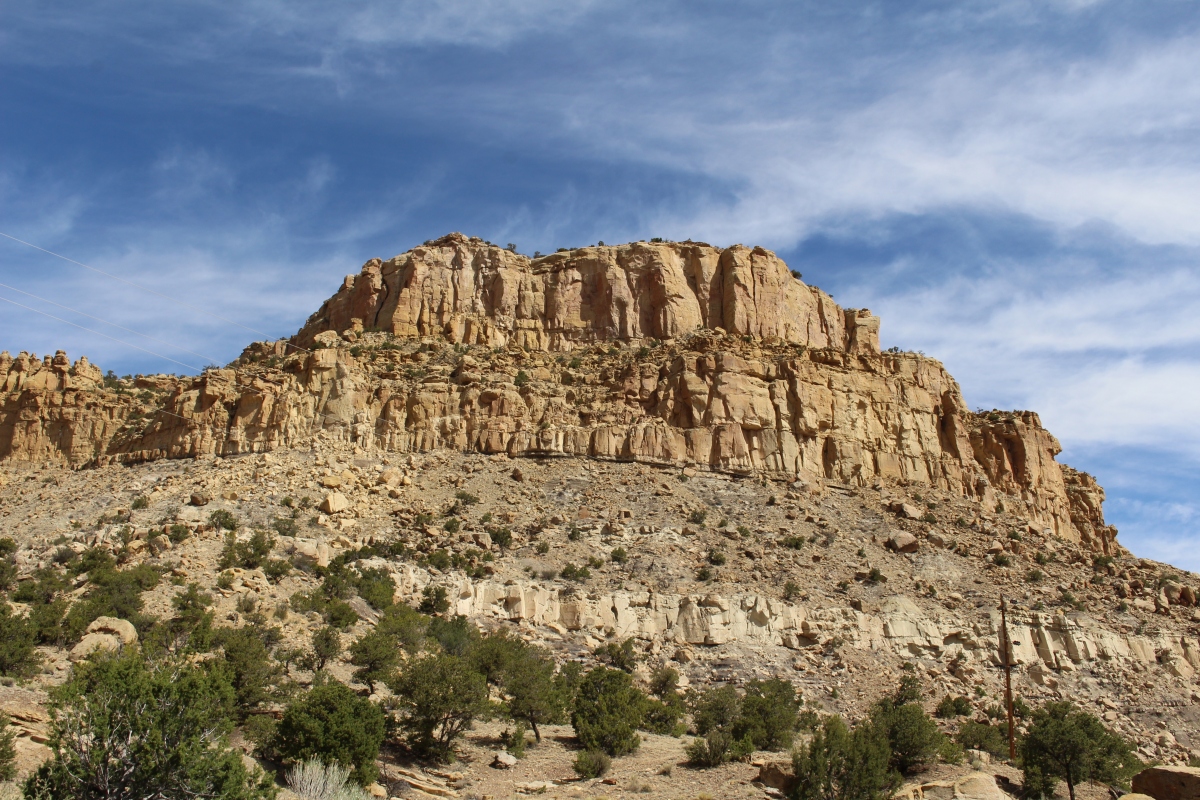 As I continued towards Chaco Canyon, scruffy dogs scrounged about beside derelict buildings in a desolate landscape.  An 8-sided hogan stood on a homestead with other prefabricated buildings.  A man walked along the desolate highway with his head hung low.  Hunched forlornly beside the roadside was a mobile home with a junkyard attached; weeds and vines swallowed a school bus and other vehicles.

Driving on the 20-mile dirt road felt like one of my old adventures when I lived in Oman.

I encountered curious cows who checked me out when I stopped beside them. 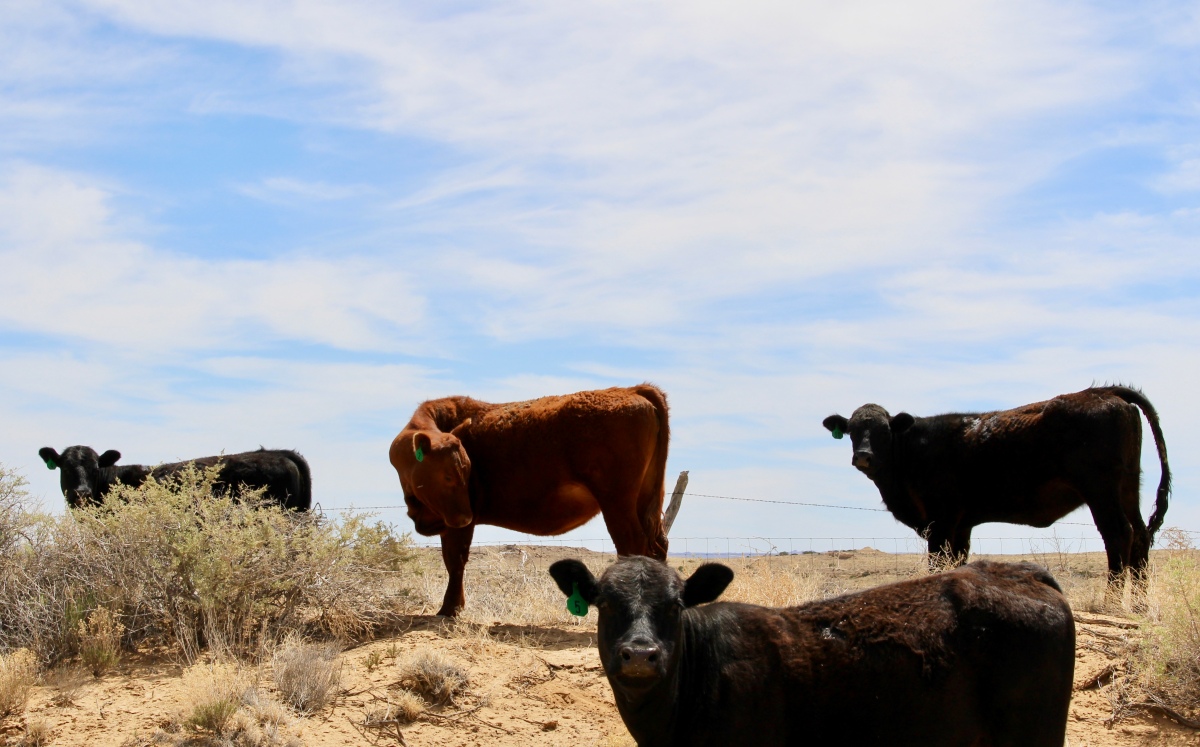 Cows on the road to Chaco Canyon

Clouds swept across the blue skies and the air was fresh and cool.

the road to Chaco Canyon

the road to Chaco Canyon

A thousand years ago, this valley was the center of a thriving culture that lasted more than 300 years, beginning in the mid 800s. The people built massive Great Houses of multiple stories with hundreds of rooms. The architecture used masonry techniques unique for the time.  Construction was planned from the start, rather than rooms being added as needed, and took place over decades or even centuries. Architectural features were uniquely Chacoan.

Chaco had become the ceremonial, administrative, and economic center of the San Juan Basin, exerting extensive influence over the area by 1050. Dozens of great houses in Chaco Canyon were connected by roads to more than 150 great houses throughout the region. It is surmised that the great houses were used during times of ceremony, commerce, and trading when temporary populations came to the canyon for these events.

The Chacoan Great House (monumental public building) closest to the visitor center is Una Vida.  Construction began close to 850 AD and continued for over 250 years. Una Vida is Spanish for “one life;” the site was named by a military expedition that discovered the structure.  It contains about 100 ground floor rooms and kivas, and a great kiva in an enclosed plaza.  Only about 20 rooms in this large building have been excavated, first in the early 1900s and then again in the 1950s by the National Park Service. Centuries of blowing sand have covered the rooms with a protective blanket of sand and native vegetation.

The Una Vida Trail at Chaco Culture National Historical Park is a 1/2 mile round-trip trail plus 1/4 mile to see the petroglyphs. 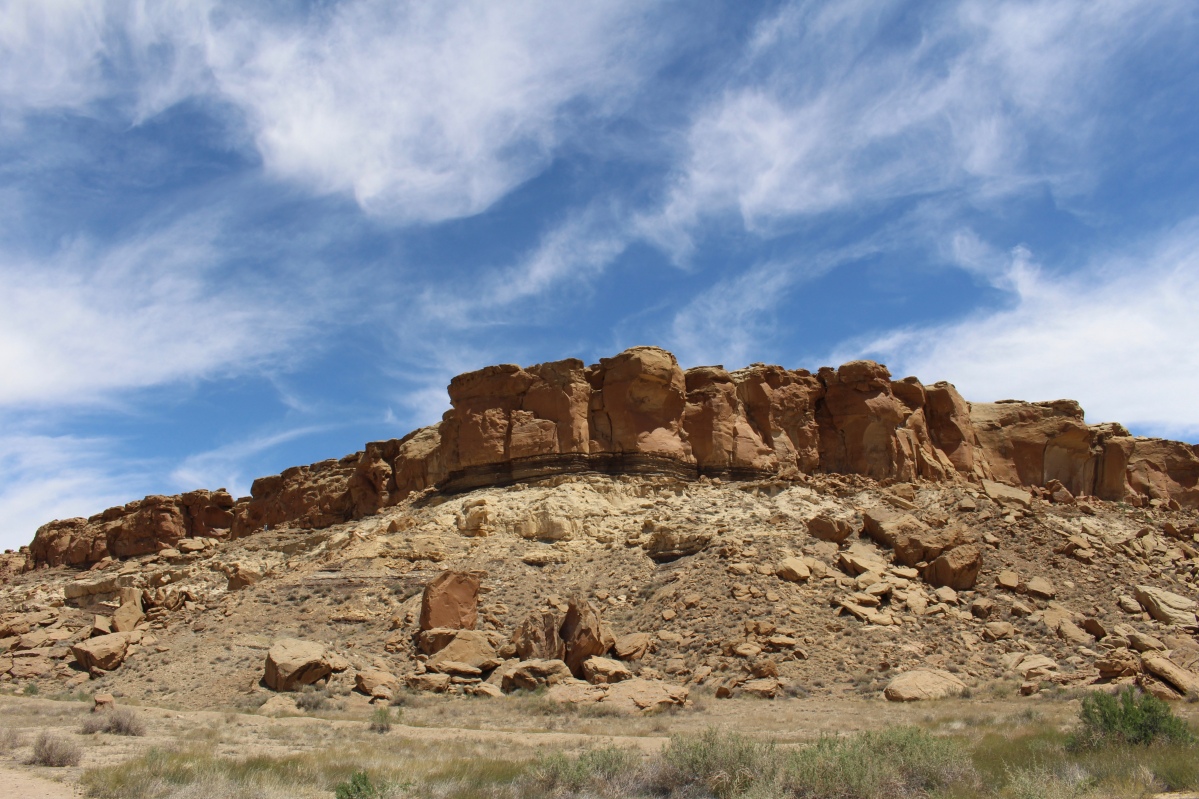 Una Vida is a large multi-storied public building with distinctive masonry, formal architecture and a great kiva.  Situated at the top of a natural rise in the landscape, it dominated the nearby community.  By the time great houses were built in Chaco Canyon, agriculture was well-established in the area.

The early great houses such as Una Vida were a much larger building style than other structures in the region.  The rough-looking walls were among the first built at the site. 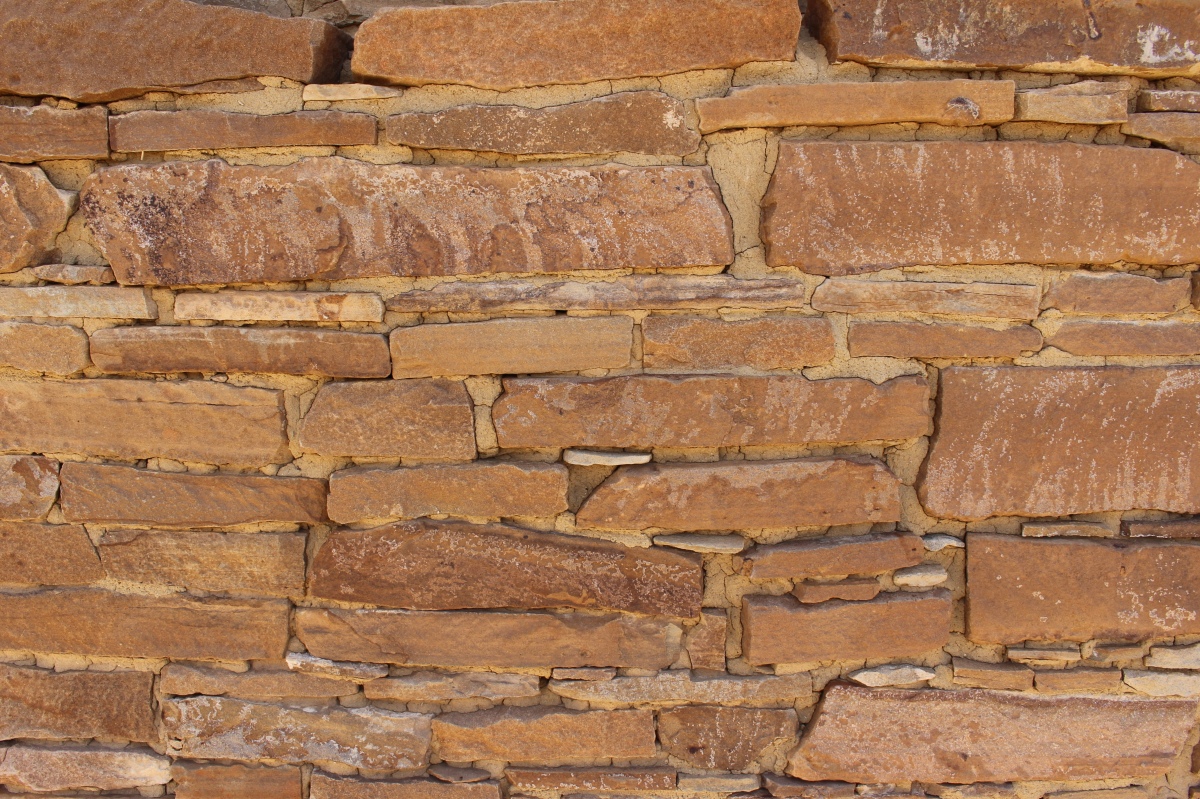 The Chacoans developed more intricate masonry styles through the mid- to late-1000s. Yet they covered many walls in plaster, sometimes with painted or engraved decorations. 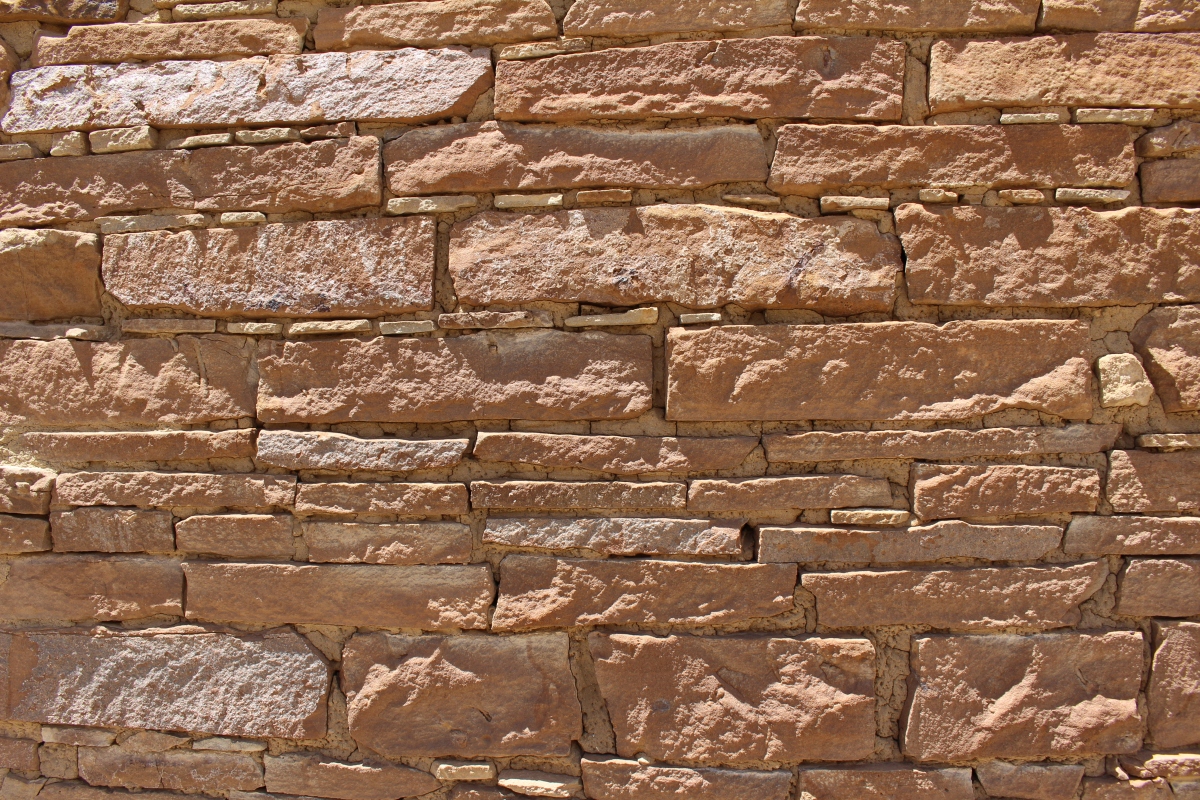 Una Vida is an “L” shaped, 2- to 3-story building which opened toward the southeast. Single story rooms fronted the plaza and stepped back to two stories further from the plaza.  A few room blocks at the southwest corner rose to 3-stories. 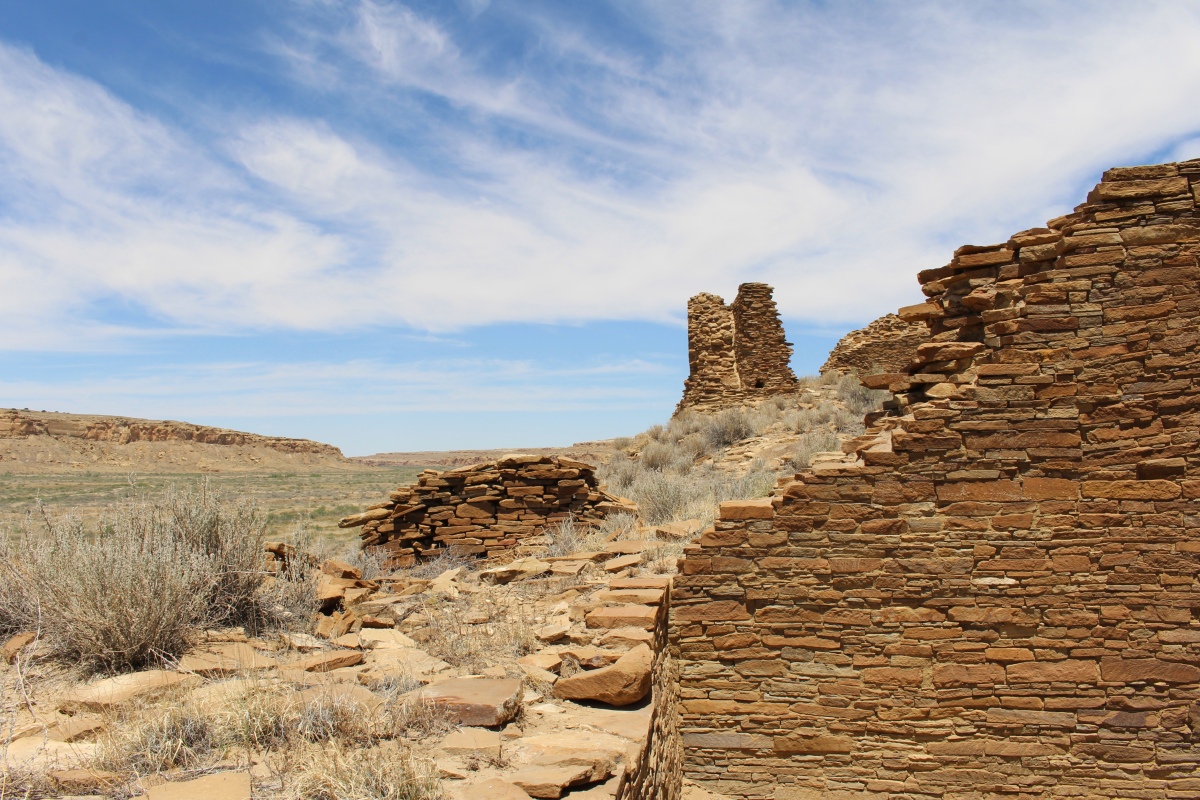 The earliest walls were one stone thick and bonded with generous courses of mud mortar.  To make higher, longer walls, the Chacoan builders widened the rubble cores and added structural stone veneers and internal wooden supports.

I climbed up a slope to two petroglyph panels.  Petroglyphs are images that are pecked, incised, and abraded into the sandstone to create designs.   It is difficult to know the meaning of the images today, but Puebloan and Navajo people today often recognize images as symbols for specific clans, or elements in stories. 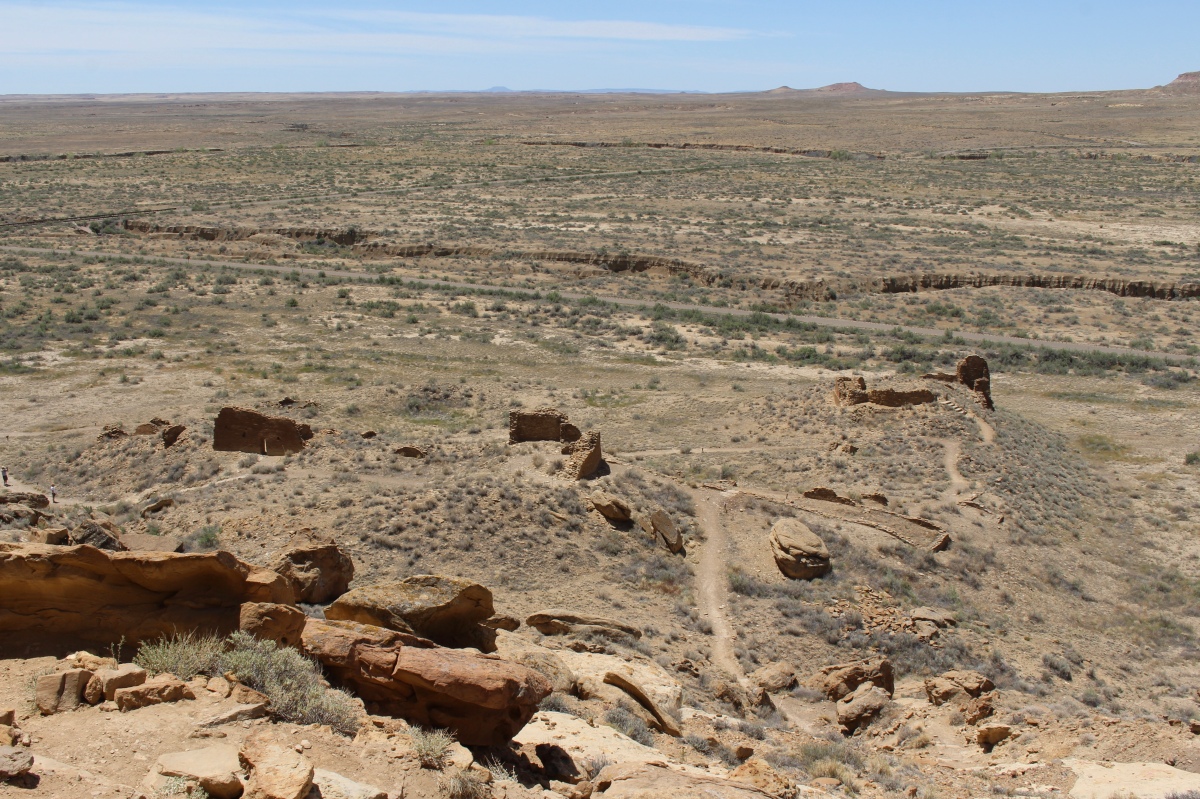 Coming back down the trail from the petroglyphs

This post is in response to Jo’s Monday Walk: Blessing the Fishermen.