I learned, while visiting the Theodore Roosevelt Inaugural National Historic Site, that in 1901, Buffalo was the 8th largest city in the U.S.

I learned that the U.S. had just celebrated victory in the Spanish-American War in 1898, three years earlier.

I learned that President William McKinley was shot and critically wounded by an assassin on September 6, 1901, while attending a reception at the Pan American Exposition in Buffalo, New York.

I learned that the assassin was 28-year-old anarchist Leon Czolgosz, who was eventually put to death by electric chair.

I learned that then Vice President Theodore Roosevelt rushed from Vermont to Buffalo, only to be assured that President McKinley had rallied after his surgery, although one of the bullets was not recovered.

I learned that VP Roosevelt, after hearing the president’s chances of recovery were excellent, joined his wife and children in the Adirondack Mountains.

I learned that the Vice President was hiking up Mt. Marcy, the highest mountain in New York, when a man approached him on the trail; Roosevelt “instinctively knew he had bad news, the worst news in the world.”

I learned that President McKinley died because of a gangrenous infection from the undiscovered bullet.

I learned that VP Roosevelt traveled long and far to get to Buffalo, arriving on September 14, just after the President had died.

I learned that, after his arduous travels, Roosevelt ate a meal, then went to pay his respects to Mrs. McKinley, who was in such grief, she wouldn’t see him. Only then did he take the oath of office.

I learned that Roosevelt took the oath of office in the library of his friend Ansley Wilcox’s house, but as two reporters there got in a scuffle, they were ousted and no photographs were taken.

I learned that Buffalo became the ad hoc capital of the country for four days.

I learned that many of the problems faced by the country in 1901 are the same problems we face today: issues of racial inequality, low wages and worker abuse, poverty, and the plundering of the environment.

I learned that Roosevelt ushered in the beginning of the progressive era.  He was an activist president who was the first to leave the borders of the U.S. during his presidency (to visit the Panama Canal); he was involved in food and drug inspections and child labor laws, and he set aside lands as National Parks. He also got involved in coal strikes and trust-busting.

I learned that I can be fascinated by history when I learn personal details of a story rather than simply names and dates, as it was taught in school. 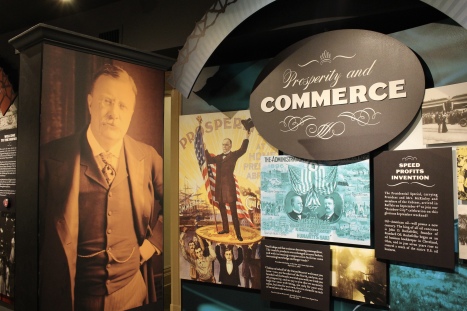 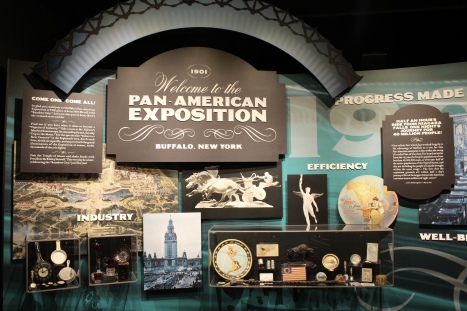 the dining room where Roosevelt ate before being sworn in

Newspaper of the day 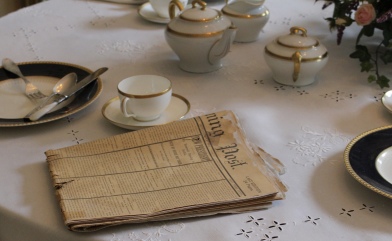 Newspaper of the day

Libary where Roosevelt was sworn in 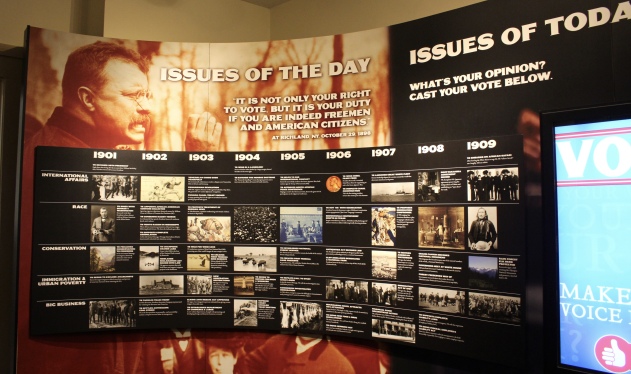 Issues of the day

Living room at the Wilcox House

I learned that the house was designated a National Historic Landmark in 1986.

I learned that the house represents the Prairie House ideal: strong horizontal lines and planes, deeply overhanging eaves, a central hearth, a prominent foundation, a sheltering, cantilevered roof, and designed art glass. The design is meant to blend with nature.

I learned that by far, the best known art glass pattern is the “Tree of Life” window.

I learned that Roman bricks, used to build the house, are long, horizontal, thin bricks.

I learned that the house has a long pergola with a statue of Venus at the end. 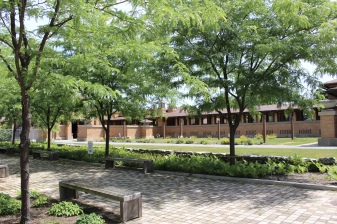 the outside of the pergola 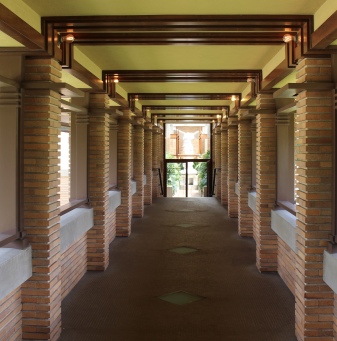 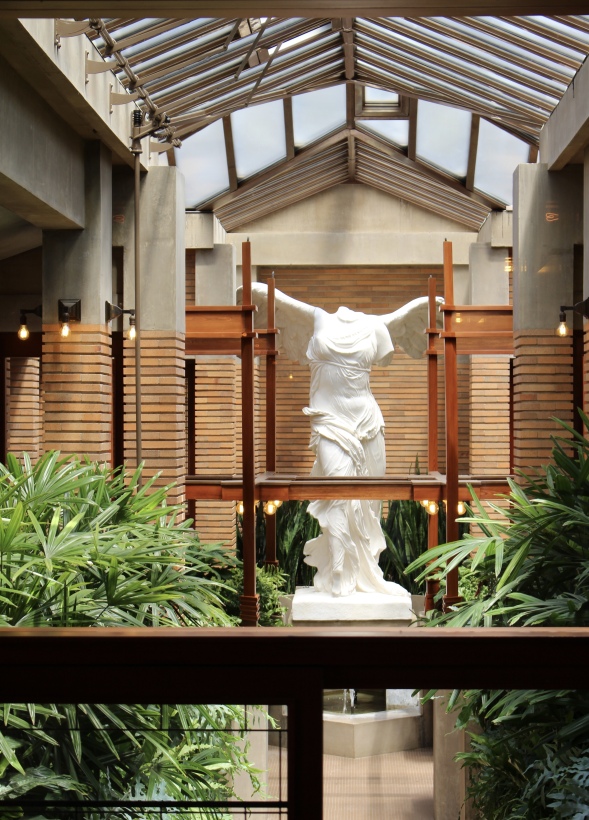 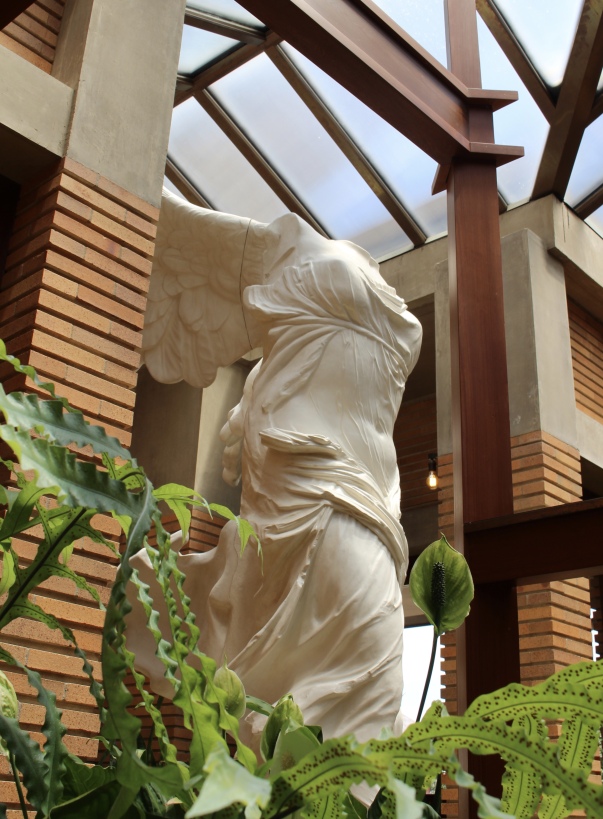 I learned that the Darwin House Complex is an anomaly in a neighborhood of mostly European-influenced homes. 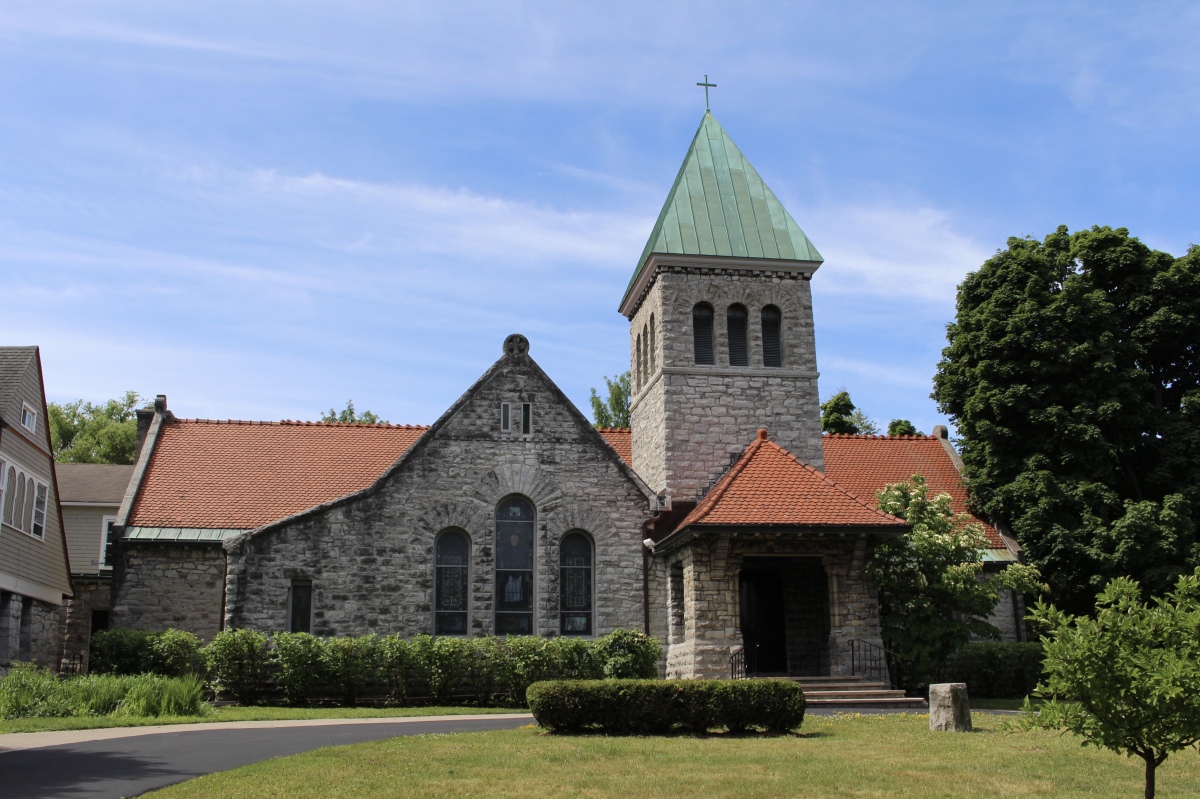 Episcopal Church of the Good Shepard across from the Martin House

I learned that I share with Frank Lloyd Wright a fascination with the art and culture of Japan.

I learned that Frank Lloyd Wright was rigid in the design of his homes and the arrangement of furniture. It wasn’t about the client, but about him, and he always got his way. 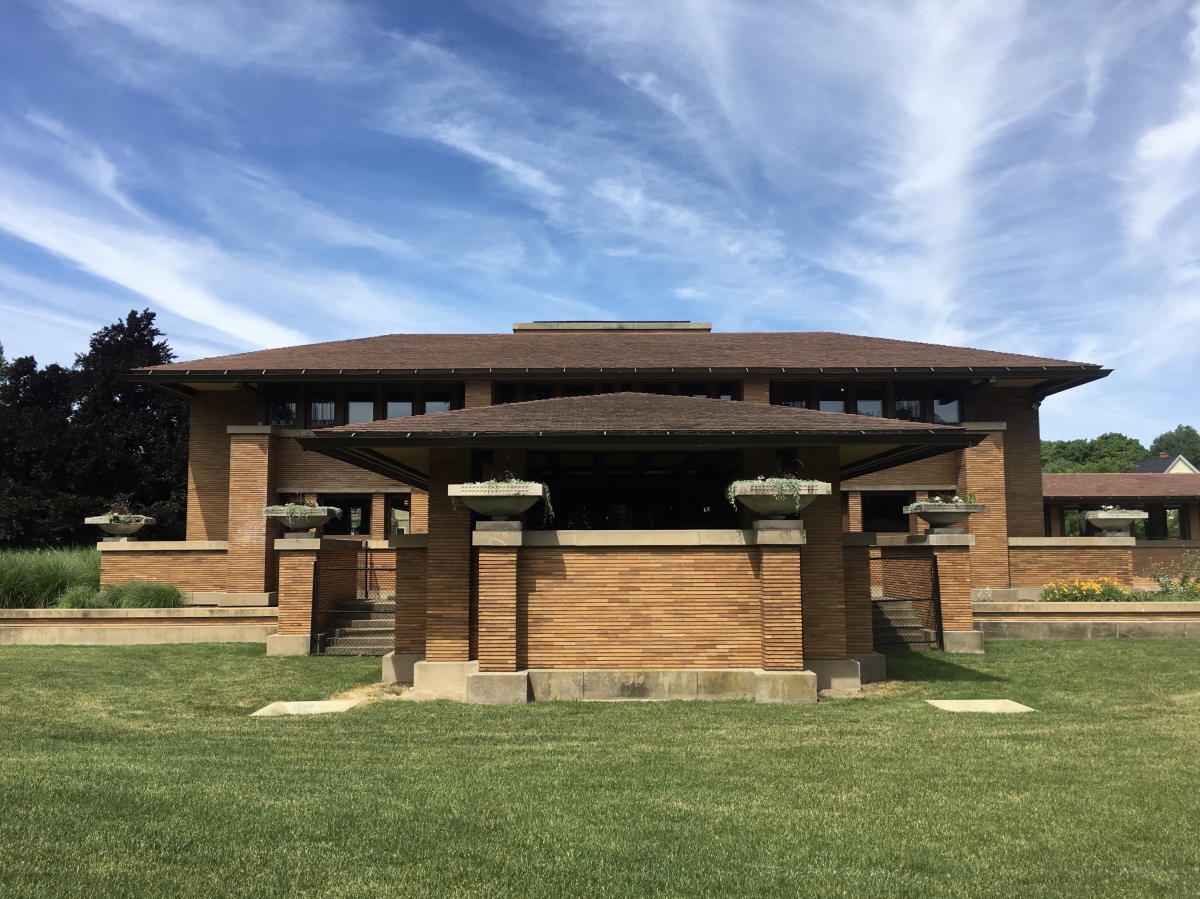 And I learned that when I plan a trip properly, I can add new stickers and stamps to my National Parks passport!

“PROSE” INVITATION: I invite you to write a 500-750 word post on your own blog about a recently visited particular destination (not journeys in general). Concentrate on any intention you set for your prose.  In this case, one of my intentions for my trip to Buffalo, New York and Niagara Falls, was to write a “things I learned” list each day.

It doesn’t matter whether you write fiction or non-fiction for this invitation.  You can either set your own writing intentions, or use one of the prompts I’ve listed on this page: writing prompts: prose & poetry.  (This page is a work in process.) You can also include photos, of course.

While I’m in Spain walking the Camino de Santiago from August 31 – October 25, and then in Portugal from October 26 – November 6, I kindly request that if you write a prose piece, please simply link it to the appropriate post, this one or my next one as soon as it publishes.  I will try my best to read your posts while I’m on my journey, but I won’t have a computer or the time or ability to add links to my posts.

My next scheduled prose post will be on Tuesday, September 11. If you do have a link before August 31, I can add your link to my next post.

This will be an ongoing invitation, every second and fourth Tuesday. Feel free to jump in at any time. 🙂

Thanks to all of you who wrote prosaic posts following intentions you set for yourself.  🙂