Oh, the overwhelming and breathtaking power of water.  I could stand for hours mesmerized by waterfalls, listening to the roar of water as it makes its way from high ground to low, spellbound by its sheer volume and power as it tumbles over cliffs and into gorges, where it swells and sinks and swirls in rapids and whirlpools.

I’ve seen waterfalls that separate countries, such as Detian Waterfall on the border of China and Vietnam, as well as Dettifoss in Iceland, a waterfall known as having the greatest volume of any waterfall in Europe. 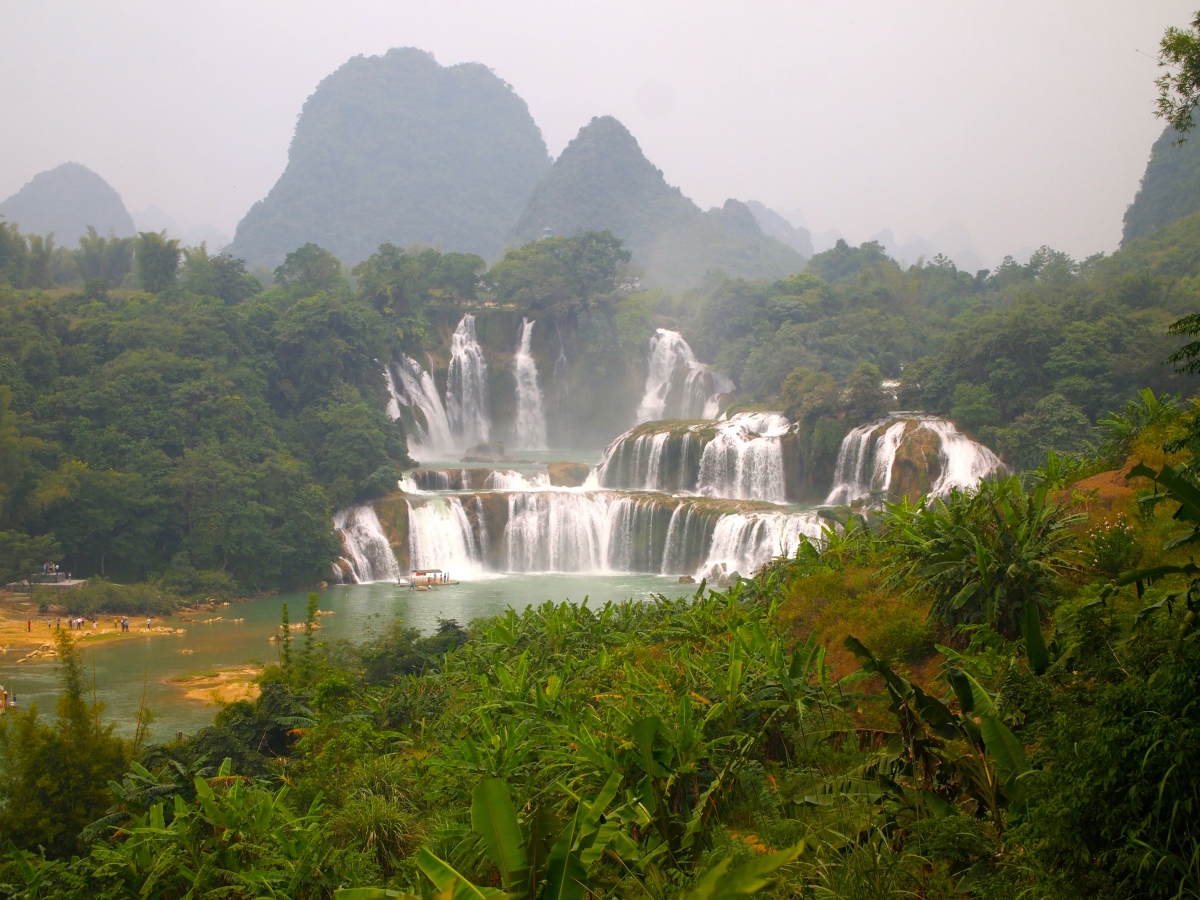 Detian Waterfall on the border between China and Vietnam 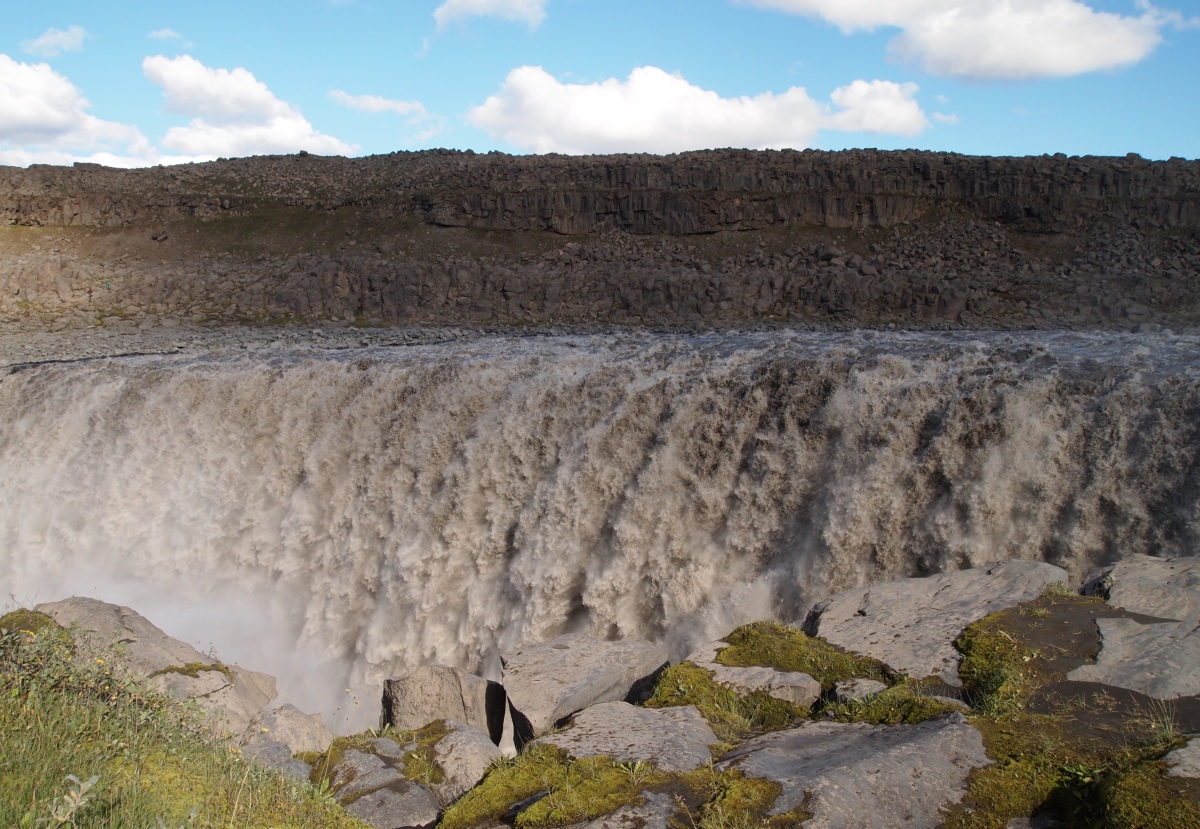 Surprisingly I haven’t seen as many waterfalls in my travels as one would expect.  However, of the ones I have seen, each is unique. 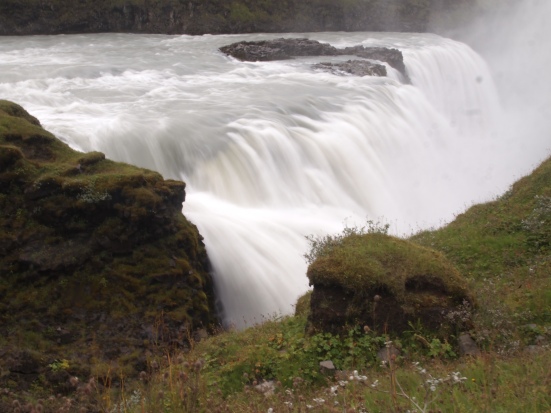 Iceland has an abundance of entrancing waterfalls.

the top of Godafoss in Iceland 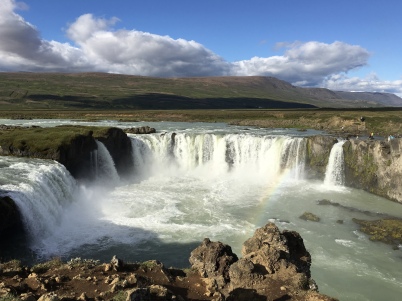 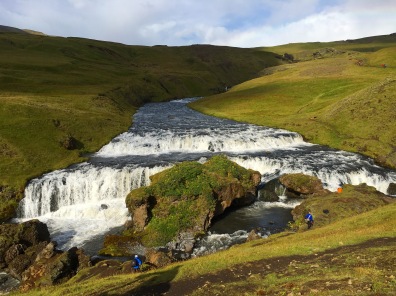 One of the falls feeding into Skogafoss

I imagine the force of Niagara Falls, as it rushes over a 17-story cliff, is tumultuous and wild, unfettered and impassioned.  I’m excited to see it and immerse myself in the experience. 🙂

It’s hard to believe that, as an American who lives about a 7-hour drive from Niagara Falls, I’ve never been to visit.  I generally don’t enjoy places that are too touristy, commercial or kitschy and I have in my mind that Niagara Falls is all of those things. Though Niagara’s reputation has deterred me in the past, I have become curious. I’m determined to see it even if it ultimately disappoints.

The idea of Niagara Falls came to me in January when I plotted out my 2018 travel plans.  I was looking for a place within a day’s drive that I could visit on my own or with the extended family, including my adult children.  My husband quashed the idea of going because he simply wasn’t interested.  “Too touristy,” he gave as his reason. Then my sons ventured out west to live in Colorado, which made it no longer feasible as a family destination.

When I mentioned my plans to an old friend of mine from Oman, who now lives in Waterloo, Ontario, she told me she lives less than two hours away from the Canadian side of Niagara Falls. We planned that when I visited, I’d meet her on the Canadian side and we’d spend a day together.  Since she recently lost her mother and has taken a number of days off from work, she only has one day to meet me.  The plan has been laid. I haven’t seen this friend since I left Oman in June of 2013, so by the time we meet, I won’t have seen her for five years. One of the things she wants to do is to visit the Butterfly Conservatory.

While on my Four Corners road trip, I became addicted to the Passport To Your National Parks.  When you visit the U.S. National Parks, Monuments, or Historic Sites, you can get a sticker describing and picturing the park, and a free passport stamp which says the name of the park and the date visited. I collected 18 stamps during my trip, and I was excited about collecting one for Niagara Falls. But, alas, Niagara Falls is NOT a National Park.  I looked at my route and found the Theodore Roosevelt Inaugural National Historic Site is in Buffalo, close to Niagara Falls, so I’ll be stopping in Buffalo to see that site and collect my stamp!! Buffalo is New York State’s second largest city, so there is plenty to see there, but I doubt I’ll have much time to linger. Buffalo is also home to a Frank Lloyd Wright House, the Darwin Martin House Complex, which I hope to visit.

While trying to vary my walks in training to walk the Camino de Santiago in September, I decided on Monday, June 4 to visit Great Falls Park.  I could collect my National Park sticker and stamp and get a walk in at the same time.  You can see what Great Falls looks like normally in the pictures below: the first was taken in October of 2016 and the second in April 2018.

Here’s my “Passport to Your National Parks” and the George Washington Memorial Parkway stamp, of which Great Falls is a part.

Passport to Your National Parks

On this June Monday, the falls were tumultuous and roaring. We’d had a lot of rain over the previous week and it covered most of the rocks that are normally visible. Churning in whirlpools were tree trunks and other detritus.  In the two pictures below, you can see Great Falls on April 8, 2018, compared with June 4, 2018.

I’m excited to explore Niagara Falls, comprised of three waterfalls that straddle the international border between the Canadian province of Ontario and the American state of New York: Horseshoe Falls, American Falls and Bridal Veil Falls.

“THE CALL TO PLACE” INVITATION: I invite you to write a 500-700 word (or less) post on your own blog about what enticed you to choose a particular destination. If you don’t have a blog, I invite you to write in the comments.  If your destination is a place you love and keep returning to, feel free to write about that.  If you want to see the original post about the subject, you can check it out here: imaginings: the call to place.

Please include the link in the comments below by Wednesday, July 25 at 1:00 p.m. EST.  When I write my post in response to this challenge on Thursday, July 26, I’ll include your links in that post. If you’d like, you can use the hashtag #wanderessence.

My next post will be about my upcoming trip to Portugal after I finish walking the Camino de Santiago in northern Spain.

This will be an ongoing invitation, on the fourth Thursday of each month. Feel free to jump in at any time. 🙂

Thanks to all of you who wrote posts about “the call to place.” 🙂